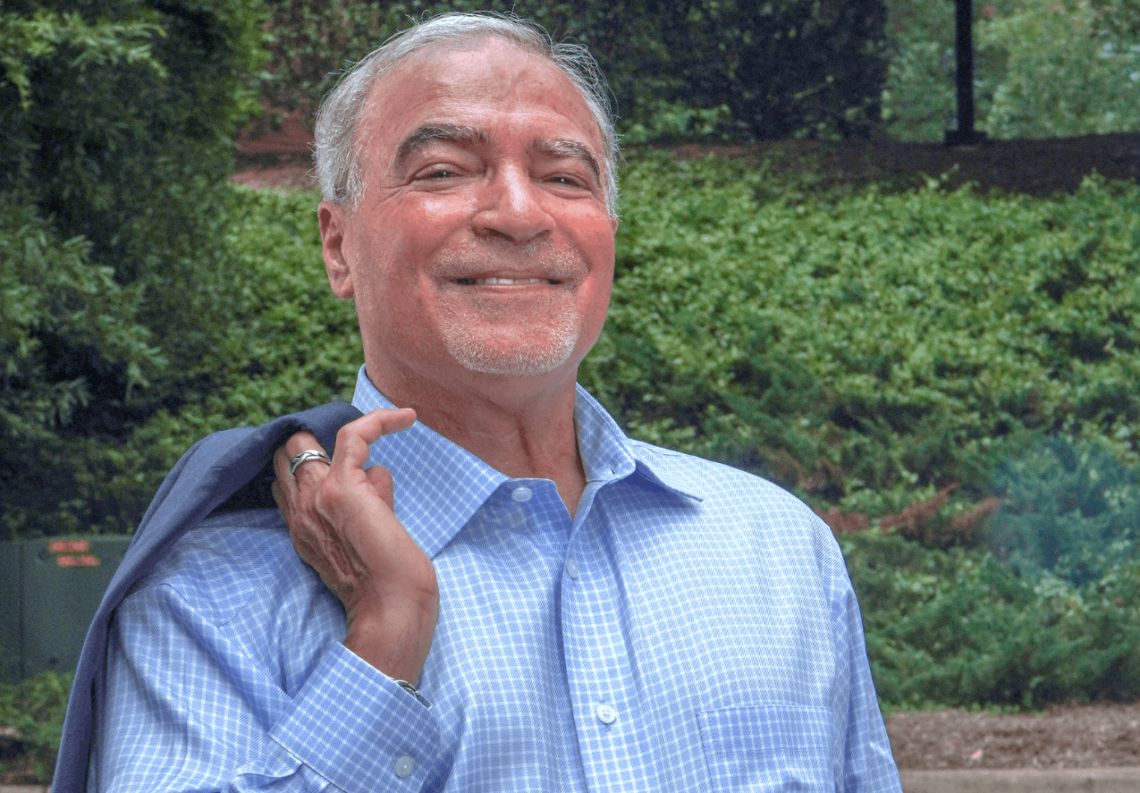 “When the judge says, ‘The jury is with the plaintiff,’ that walk between your chair and when you face the jury is as frightening as anything you can imagine,” said Raleigh trial attorney Robert Zaytoun.

“That’s why you’ve got to know how you’re going to start. Because once you begin, there’s something miraculous about it. The fear of failure becomes emotion. If you can get on a roll, like a shooter does in basketball when they get in a zone, there’s nothing more fulfilling professionally because you become the quintessential advocate for your client.”

At 70 years old, Zaytoun is brash, cocky, outspoken and a ham. During our photoshoot, he commandeered photographer David Tyson’s ladder, climbed to the top, and told his partners to stand next to him. “Take our picture. When I make my opening presentation to jurors, I usually tell them, ‘My partner Matt Ballew is 6’ 8” and my partner John Taylor is 6’5”, so the average height of our firm is 6’2”,” said the 5’6” Zaytoun laughed loudly, adding that the joke was a tribute to his comedic hero Rodney Dangerfield.

Zaytoun relishes telling stories, which he does with a dramatic flair. His timing, his cadence, the variations in the modulation, and volume of his voice and his oversized gestures are all well-polished.

If all the world is a stage, to Zaytoun, so is the courtroom. “From the minute we walk in the courthouse, because there could be potential jurors around, it is theater. However, you cannot be effective if you ramp it up from the minute the first word comes out of your mouth until you sit down after closing arguments,” said Zaytoun.

“The best thing you can do when picking a jury is shut up and listen. Listen. It used to be ‘Talk, talk, talk … this is my case, and my case is better than their case,’” said Zaytoun, who has Ballew do the voir dire.

“You don’t try your case in jury selection. That’s old school. You are really deselecting a jury, and you are trying attitudes. It sounds trite, but you are just looking for people who are brutally honest. We want to identify the ‘stealth juror.’ We want to deselect the people who think this is their time to shine, this is their chance to strike one for their idea of justice and will say what seems to be all the right things.”

Robert Zaytoun was born in New Bern, North Carolina. His father, Joseph, served in the Marines in World War II. Prior to the war, he attended UNC as an undergrad, where his roommate was Terry Sanford. They remained close friends throughout Sanford’s illustrious career.

Growing up, Zaytoun was mesmerized by the stories told by his father’s close friends, including famed lawyers William “Bill” Joslin, Hugh Cannon and Governor Sanford. He had intended to pursue a medical degree, but other seeds were sown, and he was drawn to law school. He earned his Juris Doctor at UNC School of Law.

Zaytoun began his career in private practice in Florida, then returned to his home state and served four years as an assistant district attorney for Wake County. He reentered private practice and opened his firm in Raleigh in 1982.

Much of his early practice was criminal law, but he always wanted to be a plaintiff’s lawyer. Today, the firm of Zaytoun, Ballew & Taylor, handles medical negligence cases, personal injury cases, and, increasingly, cases involving excessive force by law enforcement.

“After George Floyd’s murder and the protests that followed, I feel bringing excessive force cases are important to separate the good cops from the rogue cops,” said Zaytoun.

THE USE OF SPIES

Trial lawyers frequently cite Sun Tzu’s “The Art of War” as an inspiration, with each finding something different to pull from the 1,500-year-old military treatise. Zaytoun’s favorite chapter is entitled, The Use of Spies.

“You don’t spy on the defense. It’s not spying on the opposition,” said Zaytoun. “It’s about spying around the opposition. What’s their terrain like? Where are their troops deployed, so to speak? What kind of witnesses do they have, and what can we learn about those witnesses? So, you do spy on experts. You read everything they’ve ever written. I don’t care who the medical expert is, you can always find something they’ve written that is inconsistent with the position they are taking.

“If you can use sugar rather than vinegar, use sugar. You can get people to be very agreeable with you by not attacking them … especially expert witnesses,” explained Zaytoun. “You’re not going to tell them anything they don’t already know, and if they sense that you do know a lot about what they know, they’ll even bow up more. So, you’ve got to play dumb. ‘You know, Doc, I’m having trouble with this, can you help me understand this?’ That kind of approach to a string of leading questions is amazing if they think they are actually teaching you something. And what they are teaching you is exactly what you want the jury to be taught.”

CAN WE USE THE WORD PURPOSEFUL?

When asked about the various charities he is involved with, Zaytoun responded, “Can we not use the word charity? Can we use purposeful instead?

“I have four children and two stepchildren. They all work very hard and they all have purposeful lives they are passionate about,” said Zaytoun. He noted that none among them – Katie, 39, Liza, 38, Ford, 38, Adam, 36, Myriah, 36, and Tessa, 34 – became lawyers. Nor did he push them to go into the law.

“I tell my children, find something in your community that you can do with passion that will change one life.”

One of the projects Zaytoun labels as purposeful has been working with an Appalachian ministry in poverty-stricken Phillipi, West Virginia. “The first time I went there with the mission 30 years ago, I got my first dose of resentment from people who don’t want to feel like they are the subject of charity. I learned that we needed to give them something to do that was purposeful. Nobody wants to be given something; they want to earn it,” said Zaytoun.

Several years ago, home appliance companies had excess inventory they donated to the mission. The mission then sold the appliances at a deep discount to people in the community. “The act of them paying for these items rather than being given them made all the difference in the world,” said Zaytoun.

elivered 500 solar lights to a village in the rice-growing area that had only sporadic power and used toxic kerosene lamps at night for kids to see to do homework.

He lists his other favorite “purposeful” projects as being a member of the Board of Directors at the Wake County SPCA, supporting the North Carolina Symphony and Artspace, and as chairman of the UNC Law Alumni Association Scholarship Golf Classic that raises scholarship money for needs-based law students.

“My philosophy of living a life of purpose very much includes my law practice. I believe being a lawyer is the highest calling besides perhaps a physician (and a journalist!). A law degree offers many opportunities for ethical service to one’s clients,” said Zaytoun.

“In addition, being a mentor to Matt and John for the past nine years has meant more than anything I have ever done as a lawyer. I’ve been able to watch them grow to become strong, powerful advocates. They have taught me as much as I have taught them.”

In 2016, Zaytoun embarked on a solo six-week sabbatical to walk the Camino de Santiago pilgrimage trail in Northern Spain. “I have never been quieter in my life,” recalled Zaytoun. “To silence the brain is deafening, renewing, and exhilarating.”