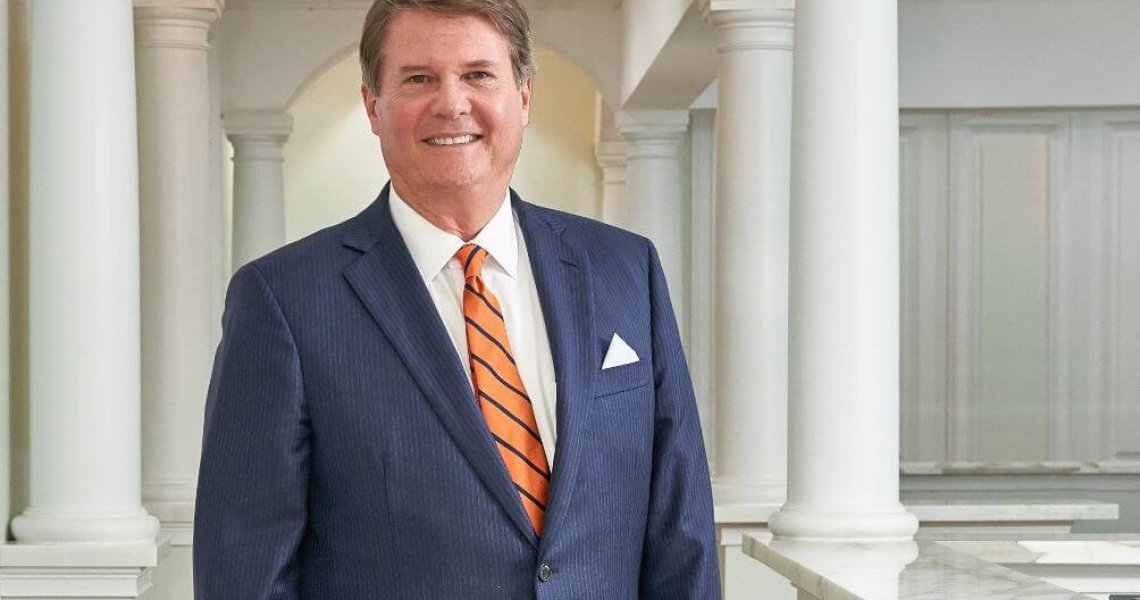 People come to careers in the law for many reasons, but not many envision becoming a lawyer as early in life as did Scott Sheftall. Sheftall was only 12 years old in 1963 when his paternal grandfather, pioneering Jacksonville architect LeeRoy Sheftall, took him aside. In that talk, the grandfather told his grandson that he should one day become a lawyer, igniting a passion in the young man that would lead him to a 40-year-plus career as one of Florida’s top plaintiff’s trial attorneys.

‘Dad’s father was a special person and became a strong influence in my young life. Daddy Grandpa was my only grandfather as my mother’s father had died when she was only six. I remember telling him that I had read A Tale of Two Cities, Charles Dickens’ classic story of the French Revolution in which English Barrister Sydney Carton sacrifices himself to be guillotined to spare the life of Charles Darnay, the lookalike husband of the woman he loved. I guess my first fictional hero was a depressed, self-sacrificing trial lawyer. And I told him that the injustice of the mob lynchings in The Oxbow Incident really upset me. Perhaps he also saw that I had self-confidence and might someday stand on my feet to tell another person’s story and make an argument.”

As exemplified by his civil litigation and arbitration successes, Sheftall has demonstrated those admirable qualities many times over. He has been a board certified specialist in civil trial law since 1988. His peers invited him to membership in the prestigious American Board of Trial Advocates (ABOTA) and The International Society of Barristers. During his impressive career, he has recovered more than $100 million for his personal injury and business clients. And this true Southern gentleman has done it in a way that is built on trust, commitment and care. Many of Sheftall’s clients view the attorney with the soft drawl as a family friend rather than simply a legal advocate. His genuine respect for people and honest concern about their problems drives the way he practices law every day.

I tell every client that we must build a relationship with one another of trust and confidence and that once we do, we will become the kind of team that can withstand the hard knocks of litigation and win.

“I tell every client that we must build a relationship with one another of trust and confidence and that once we do, we will become the kind of team that can withstand the hard knocks of litigation and win. People who are entering the litigation system are often burdened with the most difficult challenges of their lives, such as a catastrophic injury, the death of a loved one, or a threat to their business. Achieving a successful outcome usually puts them back on their feet. It is deeply satisfying to champion a person or a family through that process.”

During summer breaks while an undergraduate at Davidson College, Sheftall got to see a real law firm in action while employed as the librarian and all-round errand boy at the Jacksonville firm of family friend Mark Hulsey, a past president of the Florida Bar. The Smith Hulsey firm focused its practice in corporate, real estate, securities and other business areas during the heyday of Charter Company. Yet, while he enjoyed observing the firm’s talented transactional attorneys at work, the experience taught Sheftall that he was better suited for trial advocacy.

Sheftall competed for the National Moot Court Team and earned his Juris Doctor at the University of Florida. He also studied international trade law at Trinity College, Cambridge. Afterwards, Sheftall went to work for the Miami trial firm of Frates, Floyd, Pearson, Stewart, Richman and Greer, then regarded by many as the top trial firm in Florida.

“The chance to be mentored by so many great and famous trial lawyers was too precious an opportunity to turn down, so I launched my career in the strange and exciting city of Miami. Looking back, it was the best decision I could have made. Justice Oliver Wendell Holmes once wrote that ‘your legal education begins when what is called your legal education ends.’ My formative years at the Frates firm taught me just how true that was.”

The chance to be mentored by so many great and famous trial lawyers was too precious an opportunity to turn down, so I launched my career in the strange and exciting city of Miami.”

“The partners at the Frates firm threw us young lawyers into the stormy seas right away, and we learned to swim real fast,” Sheftall recalls. “Bill Frates had defended John Ehrlichman in Watergate and had represented Time, Inc., and luminaries like Bear Bryant and Bob Dylan. Bill and the other partners were great storytellers and we often gathered around the bar in the library to hear their yarns. Many important points of tort and commercial law were shaped by decisions handed down in the firm’s cases. It was an exciting and fun place to work. Decades later, there are notable trial lawyers all over Florida whose nursery was that great firm.”

After 20 years at the Frates firm, Sheftall decided to go out on his own in 1996, with partners Rick Alvarez and Brian Torres. In 2009, following the birth of his twin children, Sheftall and his wife Regina moved themselves back to Jacksonville where Sheftall designed beautiful offices for Sheftall & Associates on the 32nd Floor of The Wells Fargo Building.

The AV Preeminent-rated attorney touches on just a few of the interesting cases he has handled that helped shape his career as a civil trial lawyer:

When just starting out, Sheftall waged a Section 1 Sherman Act antitrust case for a small business against twelve industry-leading corporations defended by some of the country’s best anti-trust defense lawyers. He recalls that “they roughed me up wherever the case took us around the country, but I prevailed and settled my client’s federal court claim for a lot of money. I learned what else I needed to know about myself in that case.”

During his fourth year of practice, Sheftall brought a complex international tort case involving a Jeep rollover in the Cayman Islands. The defense had offered Sheft all’s clients—a couple from Miami—only $10,000 for a closed head injury, but the talented young attorney won a $2.6 million jury verdict, and then collected it only after winning another trial and two appeals. In that same year, he recovered $1.2 million for a little boy who had severely injured his arm in an office building managed by a bankruptcy trustee. In another international tort case, he represented a Jacksonville woman whose husband had been killed in Haiti while there on business for a company headquartered in Washington state. The defense had argued that the case had to be tried in Haiti under Haitian law, but Sheftall convinced the courts to try the case in Florida under more favorable American law. The final result was a $10 million settlement for the widow and children. In another case, Sheft all became the first lawyer in Florida to get a class action certified against an insurance company in arbitration. In the area of defamation, Sheftall has recovered substantial sums for public officials, public figures, private figures and for businesses in cases from one end of the state to another.

Sheftall’s penchant for helping people extends beyond the courthouse and has gained him a reputation in Jacksonville and Miami as a respected community leader. He and his small firm contributed hundreds of thousands of dollars to help build two facilities which are named for him at the Batchelor Children’s Research Institute at the University of Miami’s Department of Pediatrics. For two years he chaired the inaugural Children’s Celebrity Pro- Am Golf Classic raising millions more for pediatric care. He also helped build new facilities at The Boys and Girls Club of Miami. He earned membership in the Alexis De Tocqueville Society of the United Way, which marks the highest level of recognition for charitable contributions to community-oriented causes. In Jacksonville, Sheftall chaired his Lee High Class of 1969 45th Reunion and currently serves on the Steering Committee for the North Florida Council, Boy Scouts of America’s American Values Dinner. Each year he plays George Washington in ABOTA’s courthouse presentations to Duval schoolchildren about the Bill of Rights.

Sheftall’s path to marriage and children came a bit later in life. At 52 years old, he married the “girl I always wanted to marry,” his wife Regina. Happily, in 2009, when Sheftall was 57, the couple welcomed into the world girl and boy twins, Olivia Telfair and Blake Gaillard. About a year later, the Sheftalls decided to move back home to Jacksonville so that the twins could grow up around their living relatives. “What a blessing to have these sweet, intelligent and fun children,” Shef all says of the twins, who are now in fourth grade. “They are the loves of our lives. And, being back in Jacksonville with family and friends has been wonderful for all of us.”

After his family, Sheftall loves the great outdoors. He enjoys quail and duck hunting, fly fishing and golf. And, not too many lawyers have experienced the thrill of playing in a major golf championship like Sheftall did. In 2008, he bested a field of 86 professionals and 10 amateurs by qualifying to play in the U.S. Senior Open Golf Tournament at The Broadmoor in Colorado Springs. “With my wife Regina as my caddie, I birdied the last hole to get into a three-way sudden death playoff and then birdied the third hole of sudden death to claim one of South Florida’s two qualifying spots,” he recalls. “As soon as I started the drive back to Miami, I telephoned friends Fuzzy Zoeller and Mark McCumber to tell them of the startling news that I had qualified. They were rendered practically speechless. The Miami Herald published the headline ‘Lawyer Fights Way to Senior Open Debut.’ Predictably, I missed the cut in the Championship. But my once-in-a-lifetime sporting miracle had come true. I wish all my friends could have that kind of thrill.”

Sheftall’s other interests include oil painting of marine landscapes and fly-fishing scenes. He is also an amateur genealogist and takes pride in his family’s long heritage which he traces back to pre-Revolutionary War days, with Revolutionary War service on both his father’s and mother’s sides. In 1733, Sheftall’s father’s family helped settle Savannah with James Oglethorpe and later founded the southern colonies’ first masonic lodge. His mother’s ancestors were French Huguenots from South Carolina who fought with “The Swamp Fox” Francis Marion and provided their land for his secret hideaway.

Yes, the legal profession has undergone major changes even in my short career, but our highest ideals hopefully will endure.”

With a successful career, a close family and numerous interests and hobbies, Sheftall leads a fulfilling life, inside and outside of his practice. When asked what he has learned is most important during his long legal career, Sheftall says:

“I believe that a person’s character is his or her destiny. Yes, the legal profession has undergone major changes even in my short career, but our highest ideals hopefully will endure. It is the essence of being a professional to live within a code of good conduct. My grandfather wrote the first code of ethics for architects in Florida, and I imagine him knowing not only that I became a lawyer as he had urged, but that I also upheld his high standards of personal and professional conduct.”