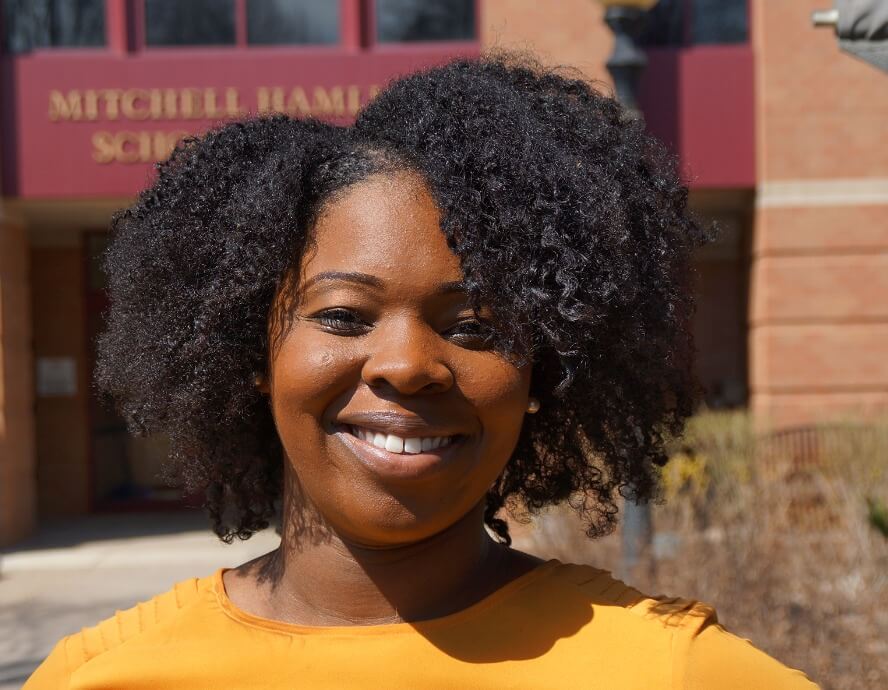 Before she begins a very busy final year at Mitchell Hamline this fall, Sheila Francois’ summer is completely packed. Among the items filling her calendar are an internship, a clerkship, a study abroad trip to London, and a summer class called “Decision Making in a Chaotic Reality.” While her schedule itself might sound chaotic, she sees it as a great way to get hands-on legal experience.

“There are a lot of opportunities here in Minnesota,” Francois says. “I’m very excited to be a part of them.”

Born in Florida, Francois is the child of Haitian immigrants. She later moved to Atlanta, where she attended high school and college.

She was recruited to Mitchell Hamline in 2016 while attending a summer pre-law program through the Council On Legal Education Opportunity (CLEO). With the help of Mitchell Hamline and dozens of other schools, the national program works to prepare students to study the law. Its ultimate goal is to diversify the pool of students in law school and someday the legal profession as a whole.

During her first year at Mitchell Hamline, Francois was involved with the local chapter of the Black Law Students Association and took part in the school’s expungement clinic.

Last summer, she started a clerkship with the Hennepin County Attorney’s office in the domestic abuse service center. This spring, Francois worked in the child protection division, and this summer she’ll work on adult prosecution cases.

The law clerk position has already given her plenty of hands-on experience – from questioning a witness on the stand to submitting exhibits to the court – and it’s work that fascinates Francois.

“I enjoy putting together evidence, memorizing facts, and giving that information to the judge and being able to answer questions,” she says. “I enjoy interaction with law clerks and attorneys.”

Francois is one of two Mitchell Hamline students accepted into the Fulton & Waite Scholars program, a Washington D.C. based internship. The program was created by former law students who wanted to offer short-term judicial internships to high-performing students arranged around their schedules – whether that’s for a week or a month. The program partners them with a judge who then becomes a mentor.

Francois was paired with a judge in Colorado for a weeklong internship in June.

“I want to understand what happens when a case comes into the system from a judge’s perspective,” she says. “How do they rule on it? How do they think about it?”

After the judicial internship, she has her three-day law school summer class before leaving for England for two weeks of studying international comparative law as a part of the Mitchell Hamline in London program. She’ll round out the summer with more work at the Hennepin County Attorney’s office, then she’ll dive in to yet another huge job—editor of next year’s Mitchell Hamline Law Journal of Public Policy and Practice Symposium.

“It’s a way to have people in the community just come and listen,” she says. “They don’t have to agree or disagree, but just to come and be educated.”

Francois will graduate from Mitchell Hamline in the spring of 2019. She’s not sure if she’ll stay in Minnesota once she’s done with law school, but she knows one thing for sure – her experience in the courtroom has convinced her to pursue a career as a trial attorney. Tim Post