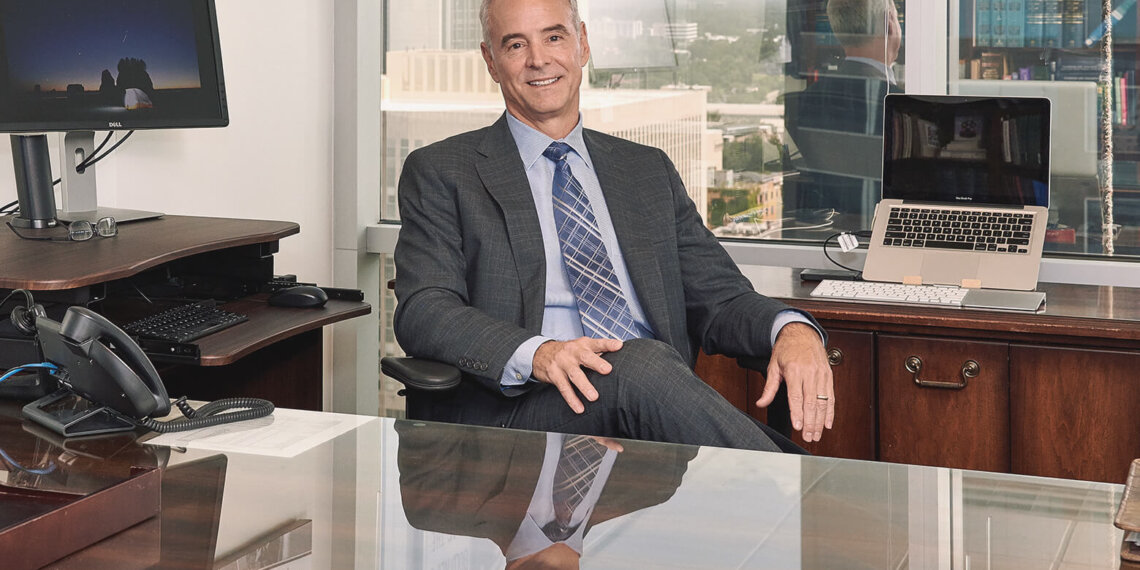 People find satisfaction in the practice of law for many reasons. Skilled litigator Steve Browning, managing partner and chief operating officer at Jacksonville personal injury firm Spohrer Dodd, finds fulfillment in helping people who have experienced life-changing injuries get back on a path to normalcy. Following a catastrophic personal injury, people face problems that they have no concept how to solve, Browning says.

“They have legal issues, medical issues, lost income and other issues and concerns,” he says. “Often times, we are really their last resort. If we can’t help them get compensation for their damages, their chances of living productive, meaningful lives are pretty much over. These injuries put such a huge strain on families. We help them regain stability.”

Browning has been with the firm of nine attorneys and 25 staff members since 1998. He focuses his practice in the most devastating of personal injuries, handling cases related to defective products, truck and auto crashes, premises liability, nursing home abuse and neglect, and other areas.

Browning, who grew up in Gainesville, didn’t have any early aspirations about a career in the legal profession. As a young man, he didn’t really know what career he wanted to pursue, although getting a business degree was in the back of his mind. His father was a university professor and there were no attorneys in his family or among his friends. Once he was an undergrad, he enjoyed college so much he didn’t want to leave. Not knowing what he wanted to do for a career, he decided to take both the GMAT and the LSAT. When he did well on both tests, he decided to get both a law degree and an advanced business degree. He would eventually become one of the early graduates of the University of Florida’s rigorous, combined Juris Doctor and MBA program.

“At that time, I was leaning more toward a business career,” he says. “I thought a law degree would be a nice differentiator to make me stand out. During my last semester in law school, I took a trial practice class and thought it was fun, so I thought I would do this lawyer thing for a while before I started a career in the business world.”

“The lawyer thing” evolved into a lifelong career in the legal profession for the talented attorney. His first job was in construction and commercial litigation. From there, Browning went on to practice in litigation management, handling around 30 thousand asbestos cases throughout the Southeast. When he joined Spohrer Dodd 20-plus years ago, he switched his practice from defense to plaintiff’s work. His combined business acumen and legal prowess provide the firm with deep insight into the most complex commercial issues.

Additionally, Browning’s business education has proven to be beneficial in his role as managing partner at the firm. As managing partner, he is tasked with overseeing the day-to-day administrative issues of running the firm, while keeping its legal services and business practices on the cutting edge.

“Keeping up with constantly changing legal, business and technological environments requires time and commitment,” he says. “Fortunately, we are blessed with a great administrative staff and partners who are always willing to share the load.”

“In a personal injury practice, you are not getting paid unless you get a recovery, which gives you the freedom and the responsibility to do everything that is necessary to get a case prepared,” he says. “No one is telling you what you can or can’t do or that your approach is too expensive, and you shouldn’t work so hard on a case. It is up to you as a lawyer to do what is necessary to get the job done—nothing more and nothing less.”

THE MOST CHALLENGING CASES

Many of the challenging personal injury cases Browning and the other attorneys at Spohrer Dodd handle have been referred to them by other firms.

“The foundation of our practice is taking cases that are outside the normal practice areas of most attorneys,” Browning says. “This generally means we are looking at complex factual, medical or legal issues.” Navigating these different issues to successful resolutions is what he most enjoys about his law practice.

“It is definitely not routine work,” he says. “Every case requires us to learn something new. Whether it is something related to automotive design or engineering or psychology, there is always some different piece of science or medicine involved. You have to scramble to learn enough about a particular subject so that you can evaluate what should have happened, what went wrong and why.”

For Browning, no one case stands out above another, however. Rather, he sees each and every one of them as equally important and meaningful.

“I have had lots of great cases and great clients,” he says. “Once you represent someone in this sort of litigation you end up with a friend for life. People come back to you—there is a bond built between you and the people you represent.”

The people he represents have had their lives turned upside down by the horrific accidents or incidents that caused their injuries. They may be facing months or even years of recovery time or permanent, debilitating disabilities. In addition to the physical and emotional trauma they face, there is the stress of financial uncertainty. Understanding and flexibility are key to working with clients facing these situations.

“Some clients really need to have their case resolved,” he says. “That is what they want— just get it over with. Other clients really need the maximum recovery because they are young and are going to need a lot of money for a long period of time. In order to do what is best for each client, you have to really understand the client’s situation and adapt a plan that is in his or her best interest.”

Browning brings strong negotiating skills and an in-depth perception about other people to his cases, which allows most to be resolved without going to trial.

“The way the system works when it’s working and you have good lawyers on all sides is that disputes are resolved by agreement for the most part,” he says. “Everybody benefits by a full and frank exchange of information. If I hold back information the other guy can’t evaluate weaknesses in his case. You’ve got to let the other guy know what you’ve got. It’s not like playing poker. Usually when the process works like it should the case is resolved. Only when there is information that can be interpreted more than one way and disagreement about what the facts are you end up at trial.”

As attorneys know, every law firm has its own internal culture. In simple terms, some firms are more traditional and conservative while others are more relaxed and supportive. At Spohrer Dodd, it is a very collegial environment, according to Browning. Most of the firm’s attorneys have practiced there for at least 10 years and thrive on being able to call on each other’s experience to flesh out weaknesses and strengths in their cases.

“I don’t think I would like practicing law nearly as much as I do if I didn’t have the ability to do it with the partners I have,” he says. “We are a very collegial group and are big about wandering down the hall and flopping down in someone else’s office and interrupting the heck out of the other guy. It seems most of the problems we have are best solved when we have two or three people sitting around talking about them and working through them. Having this group of experienced, dedicated lawyers really helps the practice.”

AWAY FROM THE OFFICE

When he isn’t working, Browning tries to get outside every day for a workout or some sporting activity. He describes himself as a “general workout buff.”

Another personal interest he has is traveling, especially when that travel involves meeting up with his three adult children at faraway places or visiting them at home. His children live in Atlanta, San Diego and London.

“They are spread out about as far away as you can get,” he says. “They are all working and getting established in their careers, so we try to travel to meet up with them.”

“What we do is so inconsistent,” he muses. “A lot of times in litigating, a very collegial approach with opposing counsel is effective. Whereas other times, a strictly by-the-book approach is necessary. There is no one approach that consistently works across the board. And trying to make people conform to the way you want to do things isn’t always effective.”