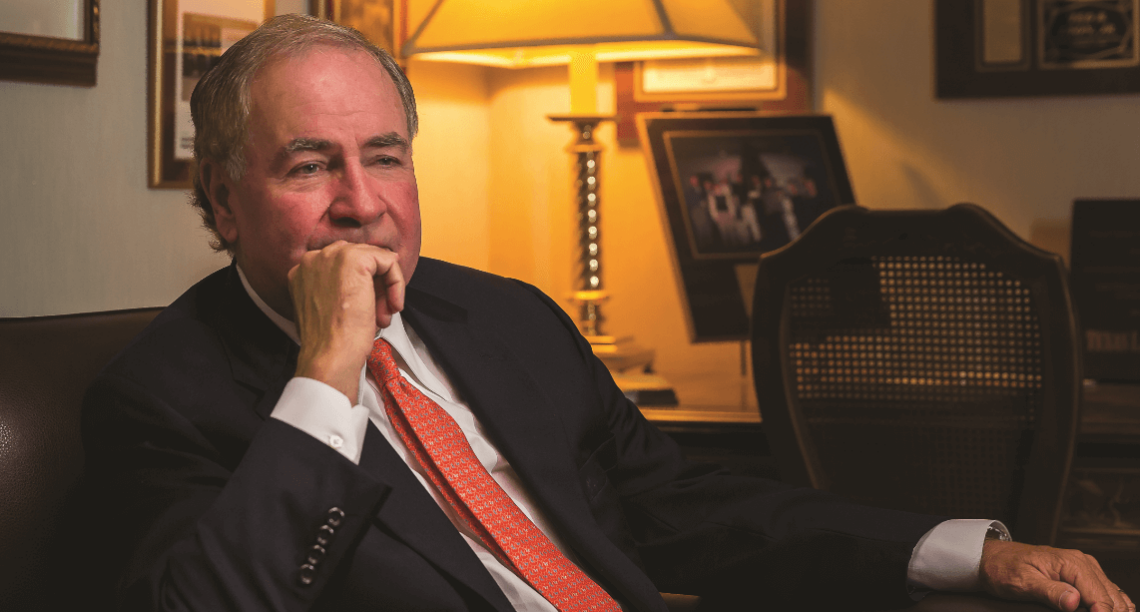 “I really care about representing injured people and helping them rebuild their lives. That’s what motivates me to continue practicing law and that means actually trying cases for people in serious need.”

The law firm is based in Dallas, but serves clients throughout Texas and other states. Of the firm’s current caseload of approximately 600 cases, 200 are out of state. Ted B. Lyon & Associates has seven lawyers, a full-time business manager, and a number of paralegals.

Lyon says trial experience is his firm’s competitive edge. “We’re real trial lawyers. Every year we get cases ranked in the Top 100 Cases in the state of Texas. We also get verdicts that are in the top 10 in the nation. We’ve done that three times. Texas Lawyer publishes a feature on the top 100 verdicts and we’re in it almost every year.”

Lyon is a recognized expert in personal injury and has been featured in local and national media coverage, including Good Morning America, 60 Minutes, NBC Dateline, Texas Lawyer, The National Law Journal, Dallas Observer and D Magazine.

He graduated from East Texas University (now known as Texas A&M Commerce) with a Bachelor of Science in political science in 1972 and earned his Juris Doctor degree from Southern Methodist University School of Law in 1975. Like many successful attorneys his interest in a law career was influenced early in life when he saw the film, “To Kill a Mockingbird.”

“That really motivated me to help people as a lawyer. After watching that movie, I knew that’s what I wanted to be. The natural evolution of my law practice led me to an awareness of what I wanted to do, which is helping severely injured people. That is a calling for me,” Lyon says.

Lyon received an early, real-world introduction to trial work during law school, trying his first case in his third year. “I had a senior lawyer supervising me. I brought the case in, tried it all basically by myself and won it. It was a big deal for me at that time. It was during my third year in law school. I lost 12 pounds in a week. I didn’t eat or sleep for a week basically. After that I knew I could do it and I knew I could be good at it,” he says.

Lyon says he enjoys the competitive nature of trial work. “I’ve always been a real sportsman. I enjoyed sports when I was young. I coached baseball for 18 years. I played some college football. I’m very competitive. The only game I know where you can still put the uniform on at my age is being a trial lawyer.”

Lyon could have taken his law career in an entirely different direction. He got married right out of high school and eventually took a job as a police officer, working nights and attending school during the day. His ultimate goal was to form his own firm, so he opened his own law practice right after law school. Having been the president of a local police association in Mesquite, it provided him with numerous business contacts. Still, he went through the expected struggles of a startup business. “If you had fifty dollars or a promise to pay me fifty dollars I’d be your lawyer,” he says.

He took on everything that came in the door, but having been a police officer he had a competitive edge because of his understanding of criminal cases. For example, he tried 12 DWI cases in one year and won every one of them.

Lyon says his biggest challenge in the early days was just learning how to do things, noting that law schools teach one how to think like a lawyer, but not the day-to-day practice and managing of a law firm.

The hardest aspect of that early learning curve was in the practice of civil law, a process Lyon calls a “butt kicking.” His first five years out of law school he had three cases that went to the Texas Supreme Court. Because of that learning curve he did not then know that an attorney needs an appellate lawyer. He took those cases all the way up himself.

Lyon says, “I just thought that’s what you do. You spend endless hours trying to figure that stuff out and I had these older lawyers I could bounce things off, but I had to do all the work myself. It was a process. I was so competitive and I wanted to do whatever to make sure I won. I spent the hours, whatever the hours took. That’s the way I went through law school I worked full time after my first semester, so it wasn’t anything for me to spend 70 or 80 hours a week working. And I did it.”

Training and real-world experience are hallmarks of the attorneys at Ted B. Lyon & Associates. Each year all of the attorneys invest considerable time attending legal seminars and conferences. Additionally, Lyon stresses the importance of actual trial practice. “I want every lawyer in the firm to go to trial several times every year. We have small cases and we have younger lawyers working on them. I want those younger lawyers to go to trial at least four or five times a year. The reason for that is that small cases don’t generate enough income to be profitable, but when I go to trial against the Koch brothers or I go to trial against Ford Motor Company or I go to trial against one of the big corporations in America I want real trial lawyers who have participated in real trials assisting me,” Lyon says.

Lyon enjoys fishing and hunting, especially with his sons. The family has a place in Montana and a ranch in South Dakota where they spend at least a month each year climbing the mountains, hunting and fishing. “I love being outdoors. I love the mountains,” he says.

Lyon is also an author. His book “The Real Wolf,” based on a case he had in Montana, is about the devastation of the deer and elk herds in Yellowstone National Park and has been picked up by a New York publishing house. He is very active in wildlife conservation.

Lyon is an attorney who loves his work and the challenges and opportunities it brings. “My current challenge is to try to remain relevant. I want to help people as long as I’m physically and mentally capable of doing it” he says.