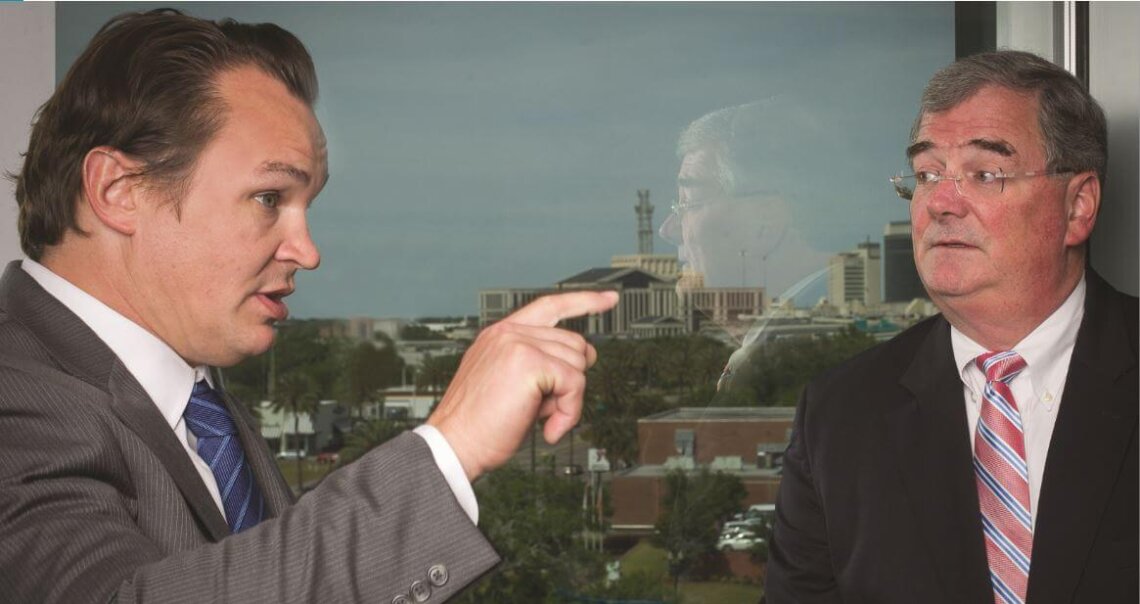 Equality. Fairness. Honesty. Integrity. It was around those four words that Thomas S. Edwards, Jr. and Eric C. Ragatz came together to practice law. In 2009, their existing firm split and they evolved their firm to litigation only. In founding Edwards & Ragatz, P.A., the two attorneys combined their passion for the law and their strong reputations for representing local residents seeking justice. Working alongside each other for almost two decades, Edwards and Ragatz have built a practice and a career to be proud of.

In the beginning, Edwards wasn’t drawn to the law. His father was an ophthalmologist and he decided to follow in his footsteps, enrolling in pre-med courses. Through his studies, however, he learned a medical career wouldn’t be the right fit for him. Instead, he graduated from the University of the South with his Bachelor of Arts in economics. When contemplating the next step in his education, Edwards was offered the opportunity to work for a law firm. Witnessing the dedication of the lawyers around him, Edwards abandoned his MBA ambitions and enrolled in law school.

Ragatz, on the other hand, found his legal calling much earlier. Modeling himself after his aunt – a practicing lawyer – Ragatz knew he wanted to use the law to help level the playing field for people who were wronged through no fault of their own. He wanted the ability to advocate on their behalf and drive home his point. Following his graduation from Florida State University with a degree in finance, Ragatz pursued that aspiration at Stetson University College of Law.

Although they found their way to the practice of law differently, both attorneys look at the profession in the same light. It is the opportunity to fight on behalf of those who most need it. This focus brought the two attorneys together to found their personal injury firm.

“It is a privilege to possess the ability to help someone,” Ragatz said.

When Ragatz completed law school, he was hired by Bob Cowles. According to Ragatz, it was Cowles who first mentored him in the art of plaintiff personal injury law. Cowles soon evolved into mediation and arbitration. While consulting on a case, Cowles learned that Edwards was looking for an associate to join his practice. Cowles immediately put Ragatz forward for the position.

Edwards accepted the recommendation and hired Ragatz on as an associate. In this role, Ragatz found another mentor in Edwards. For several years, Ragatz worked alongside Edwards, growing into his own. It wasn’t long before Edwards knew he’d earned his position as partner.

Having worked together for so long, the two attorneys complement each other’s practice. They understand the individual objectives of each case and represent their clients to the fullest of their abilities.

“Tom and I have a mentor-partner relationship,” Ragatz explained. “Tom has engrained in me the importance of knowing the facts of a case and the applicable law better than anyone else. He also emphasizes the importance of understanding the client’s needs and goals. I believe he is one of the best in his field of law because of his focus on these two tenets.”

“Eric is young,” Edwards said, “But he is a helper and maintains his own clients and caseload. I believe we’re able to work well together because of our individual strengths.”

According to Edwards, the diversity of their clientele keeps the office interesting. From day-to-day, the firm is handling a wide range of issues from nursing home litigation and medical malpractice to personal injury and products liability.

“I know I thrive off the newness of each case,” Edwards said. “No matter the issue we’re faced with, however, our goal is the same – advocate for our clients in the aftermath of an unfortunate catastrophic event.”

“I wish my clients didn’t have to experience such personal losses and hardships to be sitting across from me,” Ragatz said. “Meeting with the family and giving them an opportunity to share their story and express their concerns, that’s what I love most about this job. I try to give these families the chance to have someone listen to them. That’s the first step. The second is advocating on their behalf.”

Though they are passionate about their profession, the two acknowledge the challenges that come with it, including the sacrifice of their personal lives for the demand of their clients.

“We can’t control our hours or our calendar,” Edwards said. “Our work depends wholly on the needs of our clients and the demands of the court.”

“When you are passionate about what you do, it truly becomes your life. You can’t really turn it on and off,” Ragatz said. “It’s difficult finding balance between work and a personal life. I have to admit that my cell phone has ruined many family vacations, but it’s what the job demands.”

Both Jacksonville natives, Edwards and Ragatz have built a strong reputation and a drive to give back to the community that supports them.

The firm sponsors an annual party for the Fourth Judicial Circuit during law week. This year marks their seventh annual Edwards & Ragatz Law Day Celebration. The event brings together the legal community to network, enjoy live music and food while supporting a good cause – the Jacksonville Area Legal Aid.

“I think giving back to the community is a responsibility as a professional,” Edwards explained of his involvement in the local bar associations and community service. Aside from community service, Edwards says he enjoys hunting, fishing and traveling recreationally as a way to decompress. Both attorneys try to spend as much time with their families outside of work and continue trying to find a healthy balance.

Looking to the future of the firm, Ragatz believes they will continue to grow their reach. He doesn’t see an expansion of offices or staff. Rather his focus is on the cases the firm tackles. He believes as the firm grows, the complexity of the cases will increase.

“Our office is staffed with a great group of hard working individuals,” Ragatz said. “And we have a high-volume workload to match.”

The firm has a diverse staff, including a nurse and a part-time physician as well as a team of experienced medical malpractice attorneys to ensure that clients are receiving the highest quality representation.

Over the years, the team has grown close, hosting wine and cheese events on the weekends and celebratory dinners following successful cases.

Between the two founding attorneys, the firm plans to continue fulfilling its reputation on building strong relationships with the local community and delving into more complex matters in the coming years.