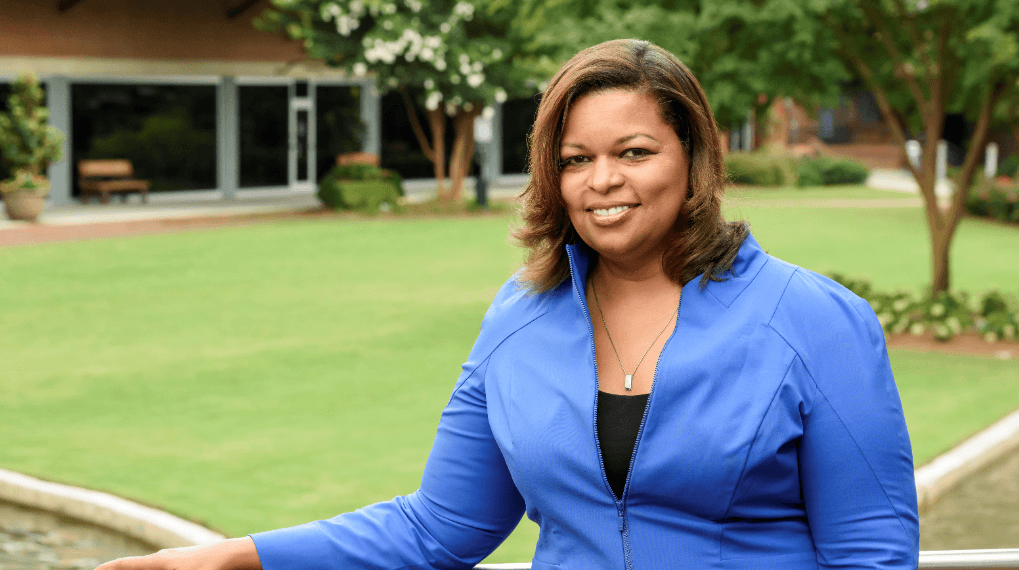 For a few moments on a hot summer day in a room full of lawyers, no one spoke or moved. Valerie Johnson held the attendees at this year’s North Carolina Advocates for Justice convention spellbound as she gave voice to the story of Robby Price and Seth Langson. Price was 14 years old when he was sexually abused by a Roman Catholic priest in the Charlotte diocese. Price and his attorney, Seth Langson, secured a substantial settlement aft er a hard-fought court battle against the church.

Johnson’s compelling presentation of the Kellie Crabtree Award to Price and Langson at the conference also offered a window into her own upbringing.

She attributes her empathy for others and her oratorical skills to her parents. Her mother, Valeria, won a Presidential Award during her years of teaching high school chemistry. Her father, Roosevelt, was a pastor for 64 years at the Holy Temple Church in Henderson, North Carolina, where she grew up.

“My father loved to preach,” Johnson said. “I credit him with a lot of my interest in being a voice for people who wouldn’t otherwise have one. When I was growing up, being able to step in and help people was in our DNA. My parents worked very hard and faced challenges much greater than mine. But we shared whatever we had. There were always friends and church members at the Sunday dinner table.”

Johnson’s first exposure to the judicial system came while visiting a courtroom at age 12. “An older African-American man was accused of stealing a can of Beanie Weenies from the grocery store. He was being sent to jail. Even a child could see that he was homeless and hungry. I thought it was so unfair that no one in court that day was there to help him,” Johnson said.

She also saw her father embroiled in a long lawsuit that he eventually won. “My understanding was that justice was slow, expensive and oft en ignored the plain truth that some people were treated better than others. I thought that wasn’t right. Even in junior high school I thought I could be a voice for change.”

After 17 years in a Raleigh civil rights and labor firm, being an agent for change was one of the challenges Johnson set out to address when she helped launch Copeley Johnson & Groninger PLLC in 2011. The firm handles workers’ compensation, personal injury, bicycle crashes, employment and sex abuse claims. The five-lawyer firm has offices in Durham and Charlotte.

“There was a huge push for education in our house,” she said. “My parents both grew up very poor. My grandfather on my father’s side was a sharecropper in Sims, North Carolina. My father had to wait for a segregated high school to be built near Sims before he could attend it. He ended up teaching in that same school. Education got him off of the farm and opened doors that others could not shut.”

Johnson’s first career was as a second and third grade teacher at Estes Hills Elementary in Chapel Hill for a few years. Johnson then returned to school, graduating from the UNC School of Law.

“I always intended to go to law school,” she said. “But I loved teaching children. My parents were both educators and I thought it was a way that I could give back. It also was a training ground for the skills I use in court. I still love teaching. I just teach at other places now. Whether it’s trial advocacy at the law school or CLEs for working people, I’m fortunate enough to be asked to help others reach their potential.”

Johnson is a specialist in workers’ compensation. “I have always been interested in the rights of working people,” she said. “We have a workers’ compensation system that exists to help injured workers. I grew up around people who worked very hard in the mills and the tobacco fields for everything they had. I saw that an injury could stop people from putting food on the table and keeping the lights on. That led me to help people with their injuries, and with their employment issues.”

“Part of my mission is to help people through our confusing legal system,” she continued. “I want to empower working people and to help them find the best solutions during what can be the worst time in their lives.”

Johnson acknowledges she has faced challenges in her career as both a woman and an African-American. “There are obstacles that I have faced that other people haven’t but that does not mean I can let it slow me down. It means I can empathize with the people I represent that have been injured or discriminated against. My empathy and my faith help me to connect with people.”

Over the last 20 years she has held leadership positions in various local and national bar organizations. She is currently the vice president of education for the North Carolina Association for Justice after serving last year as the vice president of legislative affairs. Johnson was appointed to the board of directors of Lawyers Mutual Liability Insurance last year.

“I very much enjoy leadership,” she said. “My family comes first and I have other activities I enjoy. But it is important to have a voice in organizations that shape the profession. It is important that lawyers appreciate the perspective an African-American woman attorney brings to the table.

“As much as I appreciate the roles that I have been given and am thankful for the opportunity to serve our community, I am mindful of those who went before me and paved the way for me and others,” she continued. “I want to be an example for those who will follow me as well.”

When asked about any political aspirations, Johnson is coy. “Oh now, we’ll just have to see,” she said with a big laugh. “One never knows.”

When the Johnsons began discussing remodeling their Durham home, a contractor put them in touch with HGTV’s “Love It Or List It.” Last November, Johnson’s husband Sam told the entire nation on reality TV that he wanted a garage.

As was revealed on the episode, the Johnsons chose to buy a new house, but when it flooded and the deal fell through, they decided to buy a home that needed a remodel.

“It was a little unnerving to be on a TV show and have our lives exposed. But I tried to do what I do in my professional life. I asked myself, ‘Why not go for it?’ The show is something I can show my future grandchildren. I do not regret a minute of that experience. It was so far out of my comfort zone. But isn’t that what life should be?”

As for her husband, he did not get his garage. “He needed a break from the construction,” Valerie said with a laugh.

Sam, a clinical pharmacist at Duke Regional Hospital, and Valerie met as undergraduates at UNC Chapel Hill. Today, they have two children, Alex, 20, and Sam III, 12. Their daughter Alex seems to be following in her father’s footsteps. She is interning at a children’s hospital and studying abroad through UNC. Sam III is a middle school student who embraces the family’s passion for the Tar Heels. The family is looking forward to their upcoming trip to visit Alex in South Africa.

Currently in the pipeline for Johnson is a podcast. “I want to embrace new ways to give information, but I also enjoy exploring my creative side. I love writing as much as teaching. I write for myself and keep a project or two going all the time. One day, I will finish that children’s book and my book of essays. My favorite project, however, is my novel about a lawyer who finds a new perspective on the law when she is negligent and hurts someone.”

Johnson admits that her many ventures do not come without an element of fear. “It’s hard to fight the fear, but every day you simply must. You get up and you try to do a little bit more. I want to be 1 percent better every day.”

“And if I try and fail? I would rather feel regret aft er trying and failing than not doing anything at all,” she said. “Failure is a teaching tool. When you know something does not work, then you don’t have to try that again.

“I tell my law students that when they are faced with a life choice that seems too hard to make, always choose the bigger life.”