Victor George: On a Journey for Justice 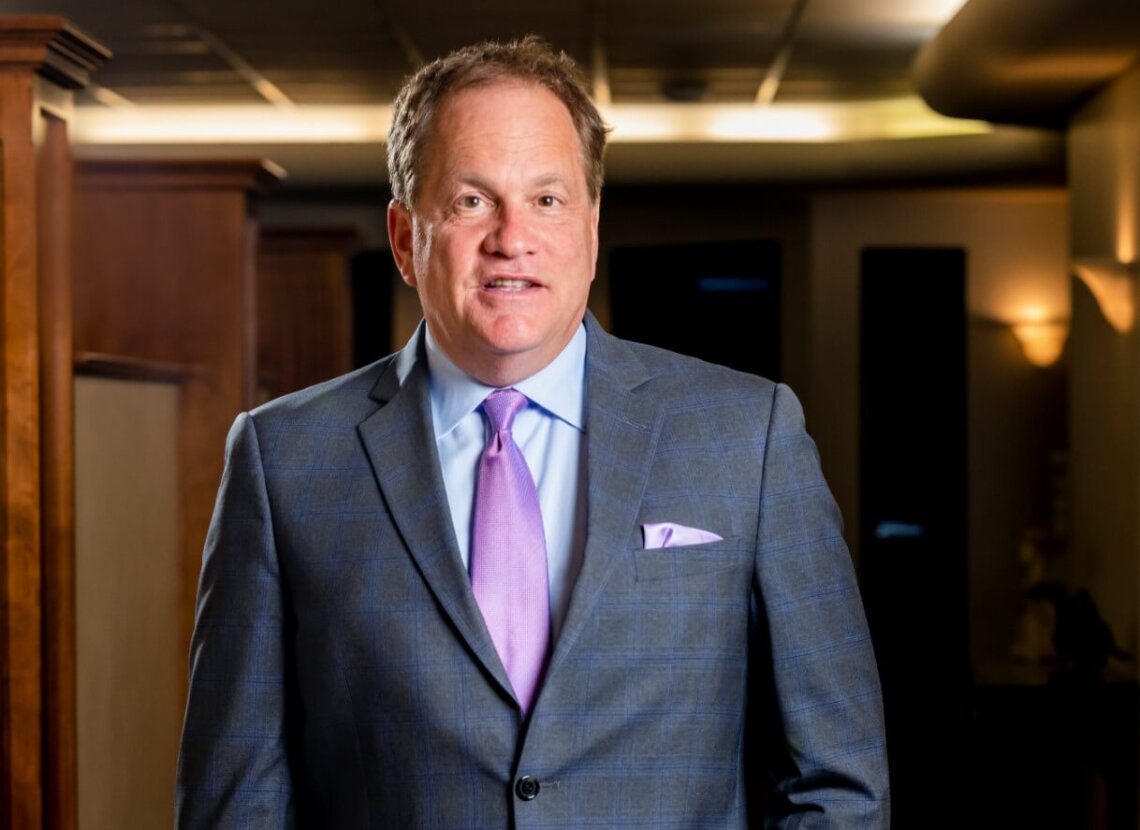 From his West Virginia coal-country roots to his extensive travels to historic sites of injustice, one thing has been clear to attorney Victor George throughout his life: Underdogs are everywhere.

George, who represents those who have suffered catastrophic injury as well as harassment or discrimination in the workplace, is known for seeking justice in Southern California, but it’s his experiences around the world that fuel the passion to give the maligned a helping hand.

“The work I do is for victims,” George says, “the people who are working hard and living the best life they are able when something terrible happens.”

In his childhood home in West Virginia’s coal mining and steel region, something terrible was not hard to find. Black lung, dismal and treacherous job conditions, pit disasters and a company store that virtually robbed generations of miners of their wages in exchange for their basic necessities were the common, if not daily, afflictions.

“Coal mining is such a hard job. I don’t think the mine owners ever put the miners first,” says George, one of five children of an entrepreneurial father and a doting stay-at-home mother who was exceptionally active in the community. “Growing up there, you very much get an idea early on of whose side you’re on.”

George’s wanderlust took seed in his college years, when he and a friend drove across the United States, picking up odd jobs in between seeing sites that included Mt. Rushmore, New Orleans, Yellowstone and the Grand Canyon. The last stretch of the trip sealed his future.

“We drove down PCH from Carmel and Monterrey, and I saw Malibu and Pepperdine,” he says. “I thought, ‘It would be fantastic to go to law school in California.’ When Pepperdine said yes, I packed up my car and drove out here. I knew it would be terrific and it has been.”

His biggest joys about the Southland were the activity-friendly weather, the prospects and the diversity. Landing in the mid ’80s, he says, was very exciting.

“It seemed like there was so much going on here, so much opportunity to learn,” he says, adding that he’s a very curious person. “There were so many different cultures to be influenced by and so many unique people around Los Angeles. L.A. is as interesting a city as anywhere in the United States. I enjoyed everything about it.”

Not to say there wasn’t work to do. People were getting injured and people were suffering workplace discrimination. L.A. was no different from other places in that regard. Drawing on the qualities he observed in his father, he struck out on his own to see their justice was served.

“I grew up seeing his self-confidence, that somehow things would work out,” George says. “He took a lot of risk, but he taught me that it’s best to be your own boss. You work extra hard if you know it’s for your family.”

George’s work paid off for not only the family he was building, but for his clients and theirs. Following a nine-month trip around the world on a Pan Am open ticket that took him to exotic locales including the Great Barrier Reef, the Taj Mahal, China, and the Pyramids, he opened his own firm in 1990. At one point he enjoyed a 10-year winning streak on every case he took to trial.

“If I take the case,” he says, “it’s because I believe the plaintiff has truly been wronged.”

One of his most recent landmark cases is Zizette v. Starline Tours et al, which achieved a $26-million jury verdict for the wrongful death of 16-year-old Mason Zizette, who perished in an accident on a double-decker tour bus during a sweet 16 birthday party. With damages for the parents based only on “loss of love,” it was the largest jury verdict in U.S. history for the death of a minor.

“It changed a lot of laws for what needs to be done on those double-decker buses,” adds George. “They’re certainly safer now. The tragic event that happened to Mason won’t happen again.”

Slipping in just under the wire before the COVID-19 virus quarantine was a large win against Wells Fargo in federal court. The jury not only found for his client, a Filipino employee who suffered from endometriosis, but they also unanimously found for “punitive damages” to punish Wells Fargo’s “malicious” behavior in the disability discrimination jury verdict.

“I sincerely hope that this was a huge lesson to Wells Fargo to stop treating ‘small’ individuals like they are disposable,” George says. “This trial verdict proves Wells Fargo is not ‘too big to fail.’”

Another recent case is one of his most interesting. Mackey v. Helinet Aviation Services pinned his client, a single mom selling helicopter equipment, against the high-ranking FBI manager who was sexually harassing and assaulting her. In a bizarre twist of retaliations and investigations aimed at the plaintiff, George prevailed with a $4.25-million jury verdict.

As the father of five children, four of them daughters, George says he has a particular desire for representing females. He sits on the executive board of the California Women’s Law Center, a non-profit that addresses legal issues for women and girls. Gender discrimination, the glass ceiling, pregnancy discrimination and sexual harassment, he says, top his list of legal passions.

One of his biggest wins under the gender discrimination umbrella came back in 2007, when he represented a sexually harassed hostess at an A-list Malibu restaurant in Leontaritis v. Taverna Tony. The verdict: $5.4 million. “I try to make sure women are getting a fair shake,” he says. “A lot of my practice is fighting for the rights of women in those areas.”

The most important legal need for women, he says: Pay equality. He cites the Lily Ledbetter Act, which brought to light the recognition that females across the United States were often doing the same job as men for lesser pay, as making strides in this arena.

“That women’s issue has always jumped out at me—the audacity that a woman would get less pay based only on her gender,” he says.

He says #MeToo has also brought even more women’s causes to light, but that a vast many women in the lower rungs of society, where men are controlling their hours and pay, are not reaping the benefits of the movement.

“There are so many working females that don’t have access to justice,” George explains. “They’re cleaning office business, restaurant servers and cashiers—not high-paying jobsand they don’t know an attorney to call. They may not recognize they’re being bullied. There are still way too many males that continually ignore the law toward females.”

Fighting national origin discrimination in a post-9/11 climate, he won a $7-million jury verdict for a Palestinian plaintiff who sued his employer for breach of contract and fraud. Omari v. Kindred Health Care was one of the country’s largest jury trial victories ever for discrimination against a Muslim.

“I was surrounded by people all my life of all ethnicities and never thought to judge anyone based on skin color, religion, or where they were from,” George explains of his stand against bigotry. The question always was: Who’s nice? Who’s honest?”

Impactful as some of his previous cases were, they didn’t have the profile of some of the victims he’s representing now.

George is representing parents, children and spouses who lost loved ones in the October 2017 shooting in Las Vegas that killed 58 people in a wrongful death case. And he is now suing L.A. County Sheriffs and the State of California on behalf of the family of Tristan Beaudette, who was shot while camping at Malibu Creek State Park with his two small daughters.

“The next morning the L.A County Sheriff’s office announces seven different shootings of which they had been aware in the park area over the prior 19 months, but they didn’t tell the public until Tristan was killed,” George laments. “Tristan would never have taken his little girls into the park if he knew about all the unresolved shootings.”

“Horribly sad” cases like these, he says, are the toughest part of his career, and they are very challenging when it comes to juries. He says he need always ask jury members if they are OK with awarding monetary damages for wrongful death.

“During voir dire, jurors will often ask, ‘I don’t understand how money corrects a death, money will not bring back the dead. Why money?’” he says. “Those are insightful questions. That’s our system. But what the families really want is for the deceased to somehow return.”

George’s extensive travels around the world have served as a poignant reminder that many victims never receive justice, monetary or otherwise.

“Lately I’ve been traveling to a lot of places to further learn about man’s inhumanity to man,” he says.

“As a discrimination attorney, those places are particularly impactful,” George says. “They keep me motivated to continue fighting for fairness and equality. You learn so much from history and you hopefully try to make things better for people, especially those who don’t have lives as fortunate as all of us.”

George—who was the 2019 recipient of Loyola Law School’s Champion of Justice award for “professional excellence, expectational proficiency and uncompromising integrity”—says one of his first exposures to discrimination happened when he read the classic legal tale To Kill a Mockingbird.

“I thought Atticus Fitch was fabulous, and he gave me a clue about what an attorney can do to really help people,” George says. “I am happy that this is my career. I really enjoy coming to work, meeting and assisting clients, engaging with attorneys, being in jury trials. I love my job.

“People call me when they need a hand and I feel very fortunate I can lead them through the legal system,” he adds. “I passionately believe in our U.S. jury system and I’m so honored to be a part of it.”

And even though his travels around the world have shown him some of the worst qualities in humanity, he hasn’t lost his faith that the positive always prevails.

“Everywhere you go,” George says, “you constantly find out that people are innately good.”