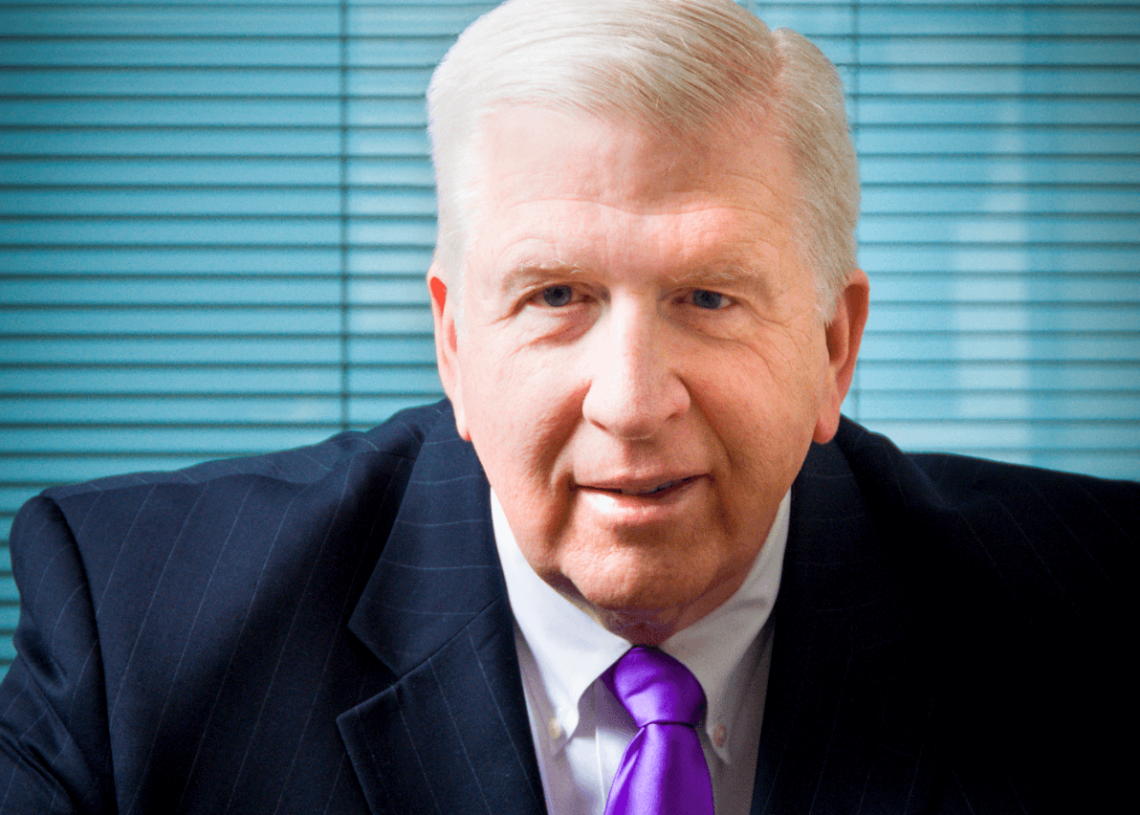 William Head finishes a long conversation by, unintentionally, summarizing everything he has just related about his 40 years as a criminal defense attorney. “Over time, what you do makes a difference,” he states.

After representing more than 10,000 people – mostly in DUI cases – over the last few decades, Head knows he’s made a difference in people’s lives. “When you have someone’s liberty on the line and you win their case, you’ve made a raving fan for life,” he says. But he’s not done. A judge recently asked him if he’s semi-retired. “I start at 4 a.m. and stop at 7 p.m.,” he says, laughing. “I work seven days a week. The guards in the building laugh when I come in at 2 or 3 in the morning. I can’t take a case and not be fully invested.”

Head, who was nicknamed “Bubba” by his older sister, acknowledges that of all the awards he’s received through the years, he’s most proud of being named the country’s top DUI lawyer in 2003 by several hundred of his peers with NCDD.com. Other Georgia DUI attorneys regularly turn to him for advice on difficult cases. Two decades ago, he organized, and was one of the 12 founding regents of the National College for DUI Defense (NCDD.com), which is the preeminent training association for DUI attorneys nationally. He’s also board certified in the field of DUI defense by NCDD.com, a qualification held by less than one-third of 1 percent of all attorneys in the organization.

Although most of Head’s cases are DUI – America’s most commonly litigated criminal cases – he has also litigated murder, manslaughter, vehicular homicide and domestic violence; as long as its criminal law. Since graduating from the University of Georgia School of Law in 1976, criminal law has been his focus. “Civil law is boring,” he says. “You can make a pile of money, but you don’t get the number of trials and challenges. You play the Super Bowl once a year; we in criminal law play it year-round,” he adds, as he points out that “everybody gets DUI charges, teachers, nurses, judges, congressmen, sports figures, TV stars.”

He admits that, as he approaches 65, he is selective in the cases he accepts. But he’s still up for a challenge; in fact, several challenges. “My quest is to educate the public to know their legal rights, focusing primarily on young adults,” he says. Viewing the video in his waiting room, one learns details such as when a police officer might stop a car and how a driver should respond; what can happen to passengers if alcohol is discovered in the car; and the consequences of DUI charges. Other pertinent, but perhaps surprising, statistics are related. “Speeding is the No. 1 killer of young adults in motor vehicle accidents. And alcohol poisoning for kids under 21 is actually a bigger killer than all motor vehicle accidents combined,” he says.

Head’s goal is to get his free video into every public and private school to educate young people about the horrors of DUI, and their rights. He envisions that the schools will require the students to write papers about lessons learned in the video. The best paper in each school will be judged in a competition for college or vocational school scholarships.

The father of two college-age daughters, Head is establishing a nonprofit organization to support his mission. “Being a parent, I think of how I’d feel if it was my child,” he explains.

As daunting an undertaking as this program is, it is not Head’s only goal at this point in his life. The author of several books, mostly about DUI and trial practice, the former history major is working on a book about his own coming-of-age experience, growing up in the Deep South.

“How do you grow up in a segregated society and every person you come in contact with is white? The only blacks in theaters or courtrooms are in the balconies. There are separate bathrooms. Restaurants only serve blacks at a take-out window. Children growing up under those conditions had no clue about why the races are separated except that their families dismiss questions and dodge the issues that make them uncomfortable. Segregation was designed so one doesn’t know the positive attributes of other people. Segregation was designed to dehumanize people,” he says.

He was essentially introduced to blacks in high school in 1967 when 16 black students in Columbus transferred to Columbus High School. That same academic year, one of the new transfers achieved a perfect 1600 score on his PSAT score, as a junior. That student eventually attended the country’s best schools, received several degrees and board certifications and is well known today as a top medical doctor. “After seeing that perfect score, I never let anyone tell me that blacks were not as smart as whites,” he says.

Between his legal cases, Head has been writing this book since 2007, and he’s eager to complete it. In fact, one might say he feels almost a pressure to finish the book, along with his mission to educate young people about the dangers of alcohol, drugs, addiction and traffic safety.

Thus, it’s not unexpected when he lists “tenacity” as one of three important attributes necessary in criminal defense attorneys. (The other two attributes are training and temerity.) “You can never give up,” he says, citing that day’s completion of a misdemeanor DUI case that he handled that lasted 3,279 days after four separate appeals. Talking about his cases, he often reports exactly how many days each case required. He obviously has a head for numbers, dates and history.

He names his late father, a World War II veteran, as the first person in his life to inspire him to practice law. “My father had been a drill sergeant in the war, and was my coach in baseball. He was also my coach in almost everything else. Growing up in that atmosphere, if I wasn’t doing anything, my father would ask me how to spell a word, even as a 5 or 6-year old.” It was his father who directed Head toward law.

“My father had to drop out of school in 1929 in the eighth grade. This is one of my earliest memories – he told me to choose whether to be a doctor or a lawyer. Only people in those two professions were able to keep working during the Depression,” Head recalls his father saying. Orthopedic surgery in high school sidelined Head from sports, so he focused on his studies and headed to law school after receiving his undergraduate degree in history at the University of Georgia.

In addition to his father, Head says, “people in history have inspired me,” listing Andrew Young, Winston Churchill and President Franklin D. Roosevelt. “These are people who made a difference. And people who don’t know their history are missing out on what’s going on today. They don’t see the parallels and they become narrow minded.”

Famed Georgia attorney Bobby Lee Cook is another person who inspired Head. “He is the greatest criminal defense attorney to ever live, according to me and many others. I saw him speak for the first time in 1977, at a GACDL seminar, and it changed my life.”

Head adds, “My wife, Kristen, an ex-DA, is my biggest fan, and my daily cheerleader.”

Although Head believes that getting a law degree provides someone with a foundation that is helpful for many professions, he hesitates about actually recommending that someone go into the legal profession. “The world is changing so fast. When you have driverless cars, my DUI business is going to dry up. I deal with high-income people and they’ll be the first to have driverless cars. Technology will change a lot of things,” he says, noting that during the recent recession there were many unemployed attorneys.

“Winning the Unwinnable Case” is another book Head wants to write. Given his stories about representing clients in difficult situations, it would certainly be eye-opening. “After speaking at scores of seminars and authoring 12 DUI books, one of my former partners complained that I’ve trained our competition. But we can’t take on every case, so it’s important for me to share the information and help folks. There are so many myths and misconceptions about the criminal justice system,” he states.

As far as civil law is concerned, he complains that there are many “incompetent lawyers going after cases to win the lottery for themselves and not caring about their clients. Selecting a lawyer from a TV ad or billboard is a bad idea.”

However, Head has acquired a reputation for helping people find the exact right civil attorney to represent them. “My expertise is knowing which lawyer to go to, who is the best in a particular litigation field. I’ll answer an email or give someone a free appointment.” For clients who contact Head about a major civil litigation case, he assesses the viability of the case and then teams up with the best civil lawyer for that type of case. In those cases, Head remains part of the legal team. “No civil attorneys have done more trials than me. I can add to the trial prep and selection of expert witnesses. These cases are important to me because you have to have the right match between the case and the experienced attorney with a proven track record for winning.”

In his 40 years as an attorney, Head has certainly proven he is a winner.