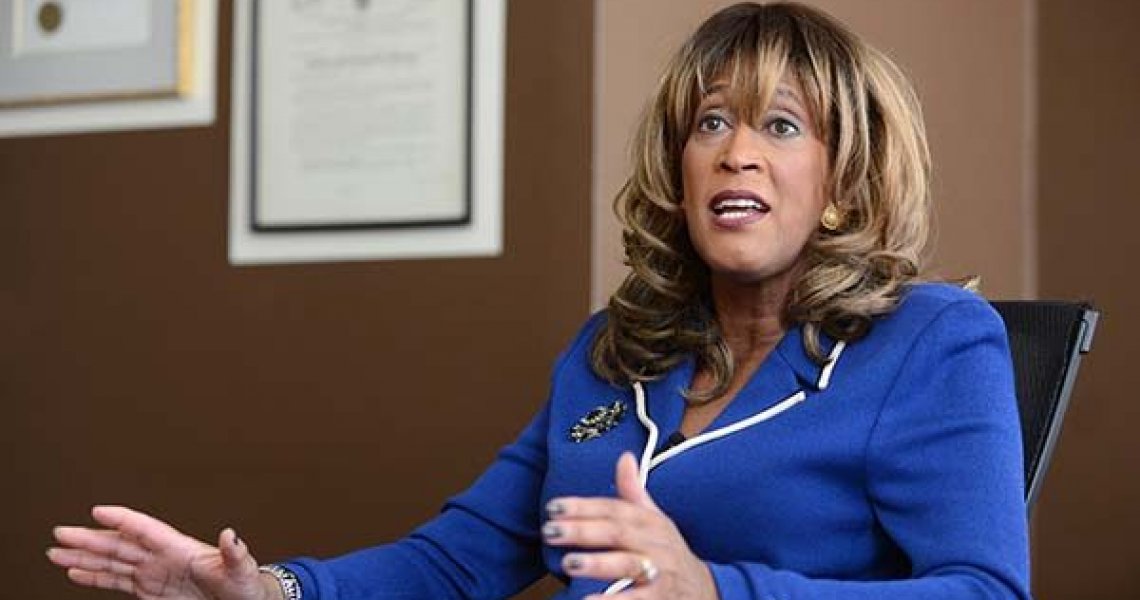 A View From the Bench: Judge Pamila Brown

Judge Pamila Brown has served on the bench of the Howard County District Court since May 2002. She simultaneously served as president of the Maryland State Bar Association (2015-2016) and is the recipient of many awards and accolades – notably, the Daily Record’s List of Top 100 Women and the Maryland Leadership in the Law Award. Most recently, Judge Brown was appointed to serve as administrative judge for District 10 (Carroll and Howard counties), succeeding Judge JoAnn M. Ellinghaus-Jones, who has retired.

Brown told Attorney at Law Magazine during a recent interview that she has been fascinated with the law since she was a child. “Growing up, there weren’t very many lawyers of color, and the only one I knew was Thurgood Marshall,” she says. “I witnessed a trial as a young person in the eighth grade and I was really intrigued by that.”

Brown tells that at the beginning, she only wanted to be a lawyer so she could make a difference in people’s lives; but “as I began to practice, I thought that serving as a jurist was the highest public calling you could have.”

When asked about whether she takes the opportunity to pass along her wisdom to other less-experienced attorneys appearing before her, Brown says, “Sometimes I bring practitioners back to my chambers and ask, ‘How do you think you did?’”

Brown’s desire to help other attorneys relates back to her time as an adjunct professor with the National Institute of Trial Advocacy, where she was tasked with critiquing lawyers’ advocacy skills in the courtroom by reviewing the attorneys’ questions and the witnesses’ corresponding answers. She would then question the attorneys to make them think about how they can improve for the future. “I’d ask – Was that a great question to ask? Did you set yourself up? Could you have painted a fuller picture?”

Brown recalls when a couple of judges did the same for her when she was starting out as an attorney. “I am forever in their debt for taking the time to critique what I had done,” she notes. “Unbeknownst to me, I was rolling my eyes when an objection was sustained. They didn’t have to tell me, they could’ve just been irritated that I was doing it.”

With a busy docket and time constraints, Brown has little tolerance for nonsense in the courtroom. “I am very mindful of people’s time. Litigants have expensive counsel. I am very deliberate in trying to get to a resolution.”

Yet, as a judge, she recognizes that many litigants come to court unrepresented and require more time and understanding. “The courts and the profession are working on alternatives,” the judge notes, “and I am excited about the advent of electronic filing.”

But in response to the idea that artificial intelligence can replace lawyers, Brown adamantly expresses, “You still need a person with legal training to perform analysis. Lawyers are still a valuable commodity and a law degree is something people relish having.”

Every successful professional has mentors and Brown is no different. She points to attorneys Charles Dorsey, former executive director of the Legal Aid Bureau; Juanita Jackson Mitchell, the first African- American woman to practice law in Maryland; and Edward Shea, well-known by his colleagues as the “father of professionalism.”

In her capacity as mentor, Brown advises law students to plan ahead. “Have a one-year, five-year, and 10-year plan,” she stresses, “and try to give back to your community as a law student and as an attorney. Be mindful of your student debt. Take courses that really interest you. And above all, enjoy the experience.”