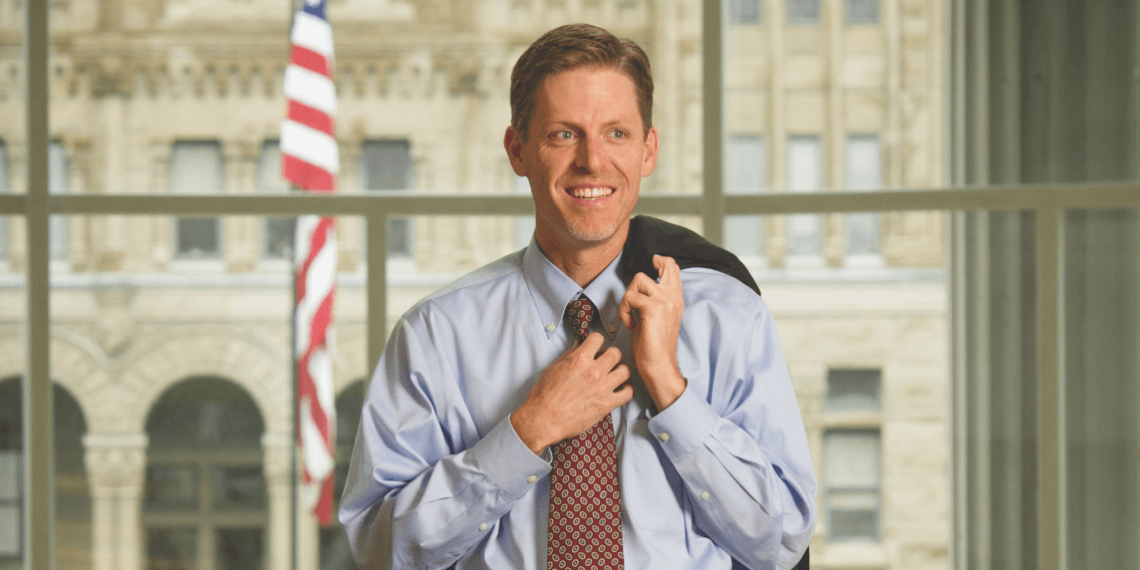 Attorney at Law Magazine Salt Lake City Publisher John Marciano sat down with Judge Ryan M. Harris to discuss his favorite thing about his job and his style in the courtroom.

AALM: Judge Harris, thank you for taking the time to sit down with us and answer some questions. Just as an introduction, why don’t you tell us what court you serve on and how long you have held that position.

Harris: I serve on the Third District Court. I was appointed to this court by Gov. Herbert in 2011, and right when I started I was assigned a calendar here in the Matheson Courthouse comprised largely of criminal cases. After about a year on the bench, I was transferred to Summit County, and worked up there for about 2½ years. Earlier this year, I returned to Matheson, where I now preside over a calendar comprised largely of civil cases.

AALM: Do you have any advice for lawyers who are thinking of filing motions to disqualify their assigned judge?

Harris: So far, I have been surprised by the fact that the vast majority of motions to disqualify seek disqualification based on events that occurred in court during the case – things like asserting that the judge spoke sharply to an attorney, or that the judge rendered a series of decisions against a party, or that the judge exhibited frustration or exasperation with an attorney or litigant. There seems to be a misperception out there, at least among some lawyers and litigants, about whether these types of things generally compel disqualification. So let me be clear: generally speaking, they do not.

Our appellate courts have repeatedly emphasized that, in general, events requiring disqualification “must usually stem from an extrajudicial source, not from occurrences in the proceedings before the judge.” State v. Munguia, 2011 UT 5, 17, 253 P.3d 1082. The only exception to this general rule exists in cases where the movant can demonstrate that the judge’s in-court actions go so far as to “display a deep-seated favoritism or antagonism that would make fair judgment impossible.” Campbell, Maack & Sessions v. DeBry, 2001 UT App 397, 25, 38 P.3d 984. Indeed, “if a judge can be disqualified for bias following a comment or ruling during the court proceedings, there [would be] no limit to disqualification motions and there would be a return to judge shopping.” Madsen v. Prudential Fed. Sav. & Loan Ass’n, 767 P.2d 538, 546 (Utah 1988).

I would very strongly urge lawyers and litigants to think twice, and then think again, before filing a motion to disqualify your judge based solely on events that occurred in court. The hurdles those motions face are really high, and the rules only allow you to file one motion to disqualify in any given case. You want to make sure that you don’t spend your single bullet on a motion that has, frankly, only a small chance of succeeding.

AALM: How would you describe your style in the courtroom?

Harris: Attorneys appearing in my court for oral argument on motions should expect, first of all, that I will have carefully read their briefs and, in most cases, that I will also have read the main cases cited in the briefs. In some cases, I may even have done some of my own research in advance of the hearing. As a result, I take the bench well-prepared to actively engage with counsel. I use oral argument to test my hypotheses, and to test whether my initial impressions about the issues I have read about are correct. I am an active questioner, and before appearing in my court attorneys should give some thought to what kind of questions I might ask and how best to answer them.

Harris: If I feel that I have a handle on the issues well enough to be able to make a ruling from the bench, I will usually do so, especially on factual issues. I find that my understanding of the facts is usually at its peak right at the close of the evidentiary presentation. Sometimes, however, I feel that the legal issues require additional consideration, and so I may take the matter under advisement. The reality is that, as a trial court judge responsible for some 800 cases at any given moment in time, I simply do not have time to take very many matters under advisement and to issue written decisions. I usually end up spending quite a bit of time on the matters I do take under advisement, and therefore my trial schedule (coupled with our 60-day decision deadline) does not permit me to have more than a handful of matters under advisement at any given time. I actually wish I had the time to write more because I very much enjoy writing. But, unfortunately, the structure of our workload does not permit it.

AALM: Tell us a little bit about what you like to do when you aren’t working.

Harris: Well, one of the great things about Utah is that we have so many outdoor opportunities close at hand. Several times a year you can find me in the canyons of southern Utah, hiking or backpacking. Closer to home, I spend a lot of time playing golf and trail running. I can often be seen walking the fairways of one of the local golf courses or running in the mountains on some of our outstanding local trail networks. Earlier this year, I checked off a bucket list item by running (mostly) from rim-to-rim-to-rim in the Grand Canyon in one very long day. Call me crazy, but those are the kinds of things I find fun.

AALM: What are your favorite things about your job?

Harris: I enjoy the intellectual back-and-forth with attorneys. I enjoy interacting with members of the public – whether litigants, jurors, witnesses or even observers – and hopefully demonstrating that the judiciary can be accessible, responsive, just and fair. But most of all I enjoy being a part of this court. My colleagues on the Third District Court are intelligent, hardworking and dedicated public servants, and many of them have become my close friends. I consider it a privilege to work among them.