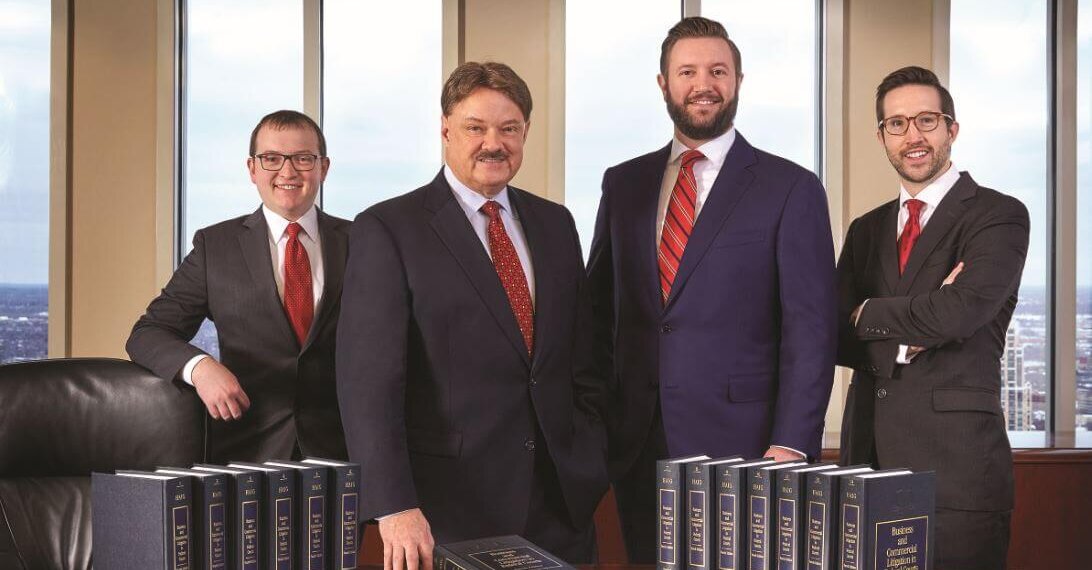 In late 2015, the ABA commercial litigation division in Washington and Thompson West in New York, selected Minneapolis-based Anthony Ostlund’s Rich Ostlund as a principal author of a completely new topic on fiduciary duty litigation for the Fourth Edition of “Business and Commercial Litigation in the Federal Courts,” which was released nationally in December 2016. The ABA reports that in 2016 there were 1,315,561 licensed attorneys in America, 24,952 of which are Minnesotans.

In describing this work’s professional significance, the ABA’s Editor In Chief notes: “The First, Second, and Third Editions of this Treatise, which were published in 1998, 2005, and 2011, respectively, have been widely recognized as unique and invaluable resources and became the definite reference works in their field. The Fourth Edition of this publication contains the work of 296 principal authors, including 27 distinguished judges and the cream of the commercial litigation bar, the best lawyers practicing in the federal courts of this nation. The generosity of these renowned authors, in sharing their experience and insights, backed up by the resources of many of the finest law firms in the United States, has enabled this unprecedented work. This publication is unique in the legal literature. There is also no other book that combines in depth treatment of federal civil procedures with substantive law in the areas most commonly encountered by commercial litigators. Even more unique, however, is that again and again throughout this work, our authors have pointed out the interplay between the rules of procedure and substantive law … This is not only a law book that is valuable as a research tool and a source of legal knowledge and citations, it is an idea book filled with nuggets of wisdom and perspective that could only have been gained by years of experience in handling cases from the most simple to the most complex.”

For 35 years, Ostlund has specialized in complex business litigation with a frequent emphasis in breach of fiduciary claims in federal, state and arbitral forums across over 30 states. Ostlund has led Anthony Ostlund trial teams in recovering between $10 million and $75 million on multiple fiduciary duty cases, while frequently defending fiduciary duty claims alleged to be between $10 million to over $1.5 billion. He has led hundreds of engagements involving breach of fiduciary duty claims from Minneapolis to Houston, Los Angeles to Miami and New York to Maui, Hawaii – and many venues in between.

Ostlund and his partners at Anthony Ostlund have deep Minnesota-based trial experience; Minnesota appellate decisions note their handling of dozens of significant and precedential business disputes over the past three decades.

This authorship selection, however, attests to his fiduciary duty, shareholder, trust and business governance practice being nationwide for over three decades.

“While having a large Minnesota presence, for at least the last 20 years, almost half of my work has been in state, federal and arbitral forums outside Minnesota.” Ostlund says. “Some of the most significant results from these engagements are largely unknown to my Minnesota professional colleagues. Being nominated by multiple national peers from across the country familiar with my work is deeply appreciated, as is having the chance to demonstrate to our professional colleagues across America that the practice standards in Minnesota are second to none.”

Notably, the Fourth Edition editors quote Ostlund’s endorsement as a featured author on fiduciary duty litigation by the Honorable Richard Gebelien, Delaware judge and former attorney general of the state of Delaware. “As a former Delaware superior court judge for 21 years, the Delaware attorney general and senior counsel of Bifferato LLC, I’ve had the opportunity to observe the best in action. In my role as senior counsel to Bifferato LLC, I represented the stockholders of a Delaware corporation who were sued in a complex issue involving stock options. I asked several judges from Minnesota who would be the best litigators for this type of corporate matter. I received Rich Ostlund’s name. We were extremely pleased with the representation. He developed a successful strategy that ended the litigation and then successfully defended the result through two levels of appeal. Clearly, Rich and his firm deserve their reputation as top business litigators.”

Ostlund underscores that the authorship of the fiduciary duty litigation section was a real team effort. Anthony Ostlund associates Dan Hall, Chris Haugen and Peter McElligott were deeply involved in the project. Thousands of hours were invested in 2015 and 2016. Ostlund also emphasizes that the work of so many Anthony Ostlund professionals and staff over the years led to the results upon which this reputation and selection is founded.

As a final thought, Ostlund – reflecting on 36 years as trial counsel – shares, “It is an honor to have been nominated and selected by peers. The greatest joy in this project has been recalling the advice and guidance of so many mentors to my career; the incredibly gift ed colleagues that we have at our firm and to see how the newest generation of lead trial lawyers at Anthony Ostlund is now continuing along this path and tradition of excellence.”