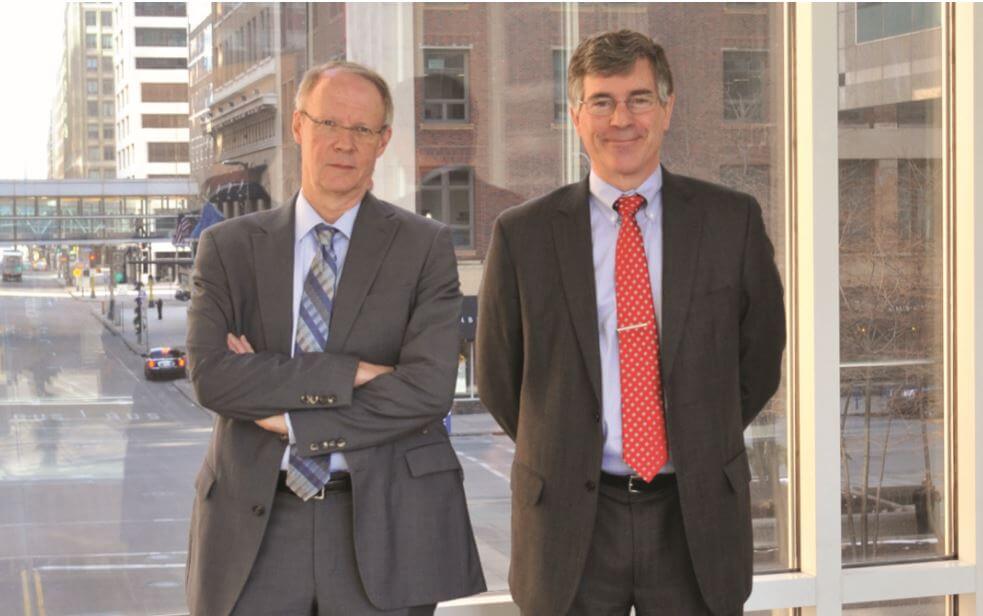 From the intrepid European voyagers who first set foot on North American soil, to the pioneers of the Oklahoma land rush who charged forth on horseback to stake their claims, Americans have believed in their unassailable right to own land and forge a homestead. In the American psyche, home ownership represents the ultimate in security, identity and legacy.

Lawyers Brad Beisel and Kevin Dunlevy have made careers of helping people and organizations navigate the legal complexities associated with the ownership, transfer and mortgaging of real property, protecting a dream that has become fragile for many since the Great Recession.

Beisel is Minnesota born and raised, a native Midwesterner with an intrinsic connection to his home soil. After earning his undergraduate degree in philosophy, he went on to law school at the University of Minnesota, and then spent four years working in the title insurance industry. When he decided to go into private practice, Beisel built on the quality relationships he had cultivated to develop a real estate practice focused on representing title insurance companies and their insureds.

Dunlevy is also a native son, who grew up just over the border in North Dakota. When he was in third grade, his mother told him he should become a lawyer. He graduated with a political science degree and spent three years working for the U.S. Senate, where he realized he should follow his mother’s advice. He returned home to attend law school at the University of North Dakota. The Duluth firm for which he went to work needed a real estate attorney, so he focused on title examinations and mortgage foreclosures, and found that this area of law played to his interests and strengths, including geometry and history.

The two became good friends, and eventually the idea of forming a practice together seemed like a natural fit. “Our friendship continues today,” Dunlevy said. “It’s nice to be part of an office where people are cordial, honest and collegial.”

Since 2003, these attorneys have developed a comprehensive real estate practice, to include real estate dispute resolution and litigation; title insurance claims and coverage; mortgage priority and validity; construction and mechanics liens; creditors’ rights; commercial and residential real estate transactions; and closing and escrow liability. Both attorneys have extensive appellate experience, and firm attorneys have appeared and won arguments before the Minnesota Court of Appeals and the Minnesota Supreme Court on behalf of their clients. Today, they are joined by three more attorneys whose enthusiasm and skill bolster the firm’s reputation for integrity and results – Michael E. Kreun, David J. Krco and John F. Nielsen. “The five of us make a very effective team in handling real estate matters large and small,” Beisel observed. “I really enjoy the practice because of the people I work with.”

At Beisel & Dunlevy, the focus is on swift resolution for clients. “We always prefer to settle a matter and not spend a client’s money on trial if it can be avoided,” Dunlevy explained. “Our objective is to look at how we can resolve disputes in the most cost-effective manner. We won’t force a matter to trial if we can settle it. And a lot of real estate issues we deal with are matters of law about which a judge can render a summary judgment.”

Beisel added, “ADR is often the best resolution for a typical real estate case and often we can be most effective putting the client in a strong settlement position. Judges like to say it’s kind of crazy to let a court decide a boundary dispute when the parties know the issues and their respective needs so intimately. But when litigation is necessary, all of our attorneys are well prepared for aggressive and decisive action in complex motion practice, trials and appeals.”

Many firms trust these attorneys with their referrals when they encounter a conflict of interest or simply need a specialist in the area of real estate law. “Big firms know that we are not only competent to handle their cases, but that they can trust us not to steal clients away from them,” Beisel said. “We really do enjoy working with lawyers and judges, and we value the congenial relationships we have developed with our colleagues over the years.”

Dunlevy says that it is his practice to take opposing counsel to lunch once a matter is concluded, and if he thinks the attorney has behaved honorably. “My hope is that I take a lot of people to lunch. It makes the practice more enjoyable. I’ve taken Brad to lunch lots of times,” he said with a laugh.

Real estate has recently become a dynamic area of law, with the Great Recession causing the failure of many housing development projects, and leading to fierce disputes between lenders, developers and contractors. The lawyers at Beisel & Dunlevy were in the middle of it all and helped shape the post-recession legal landscape in Minnesota through several important appeals court and Supreme Court decisions. At the same time, the foreclosure crisis exposed stress points in the law and processes relating to foreclosure and lending practices. Again, lawyers of Beisel & Dunlevy have been at the forefront, testing and developing the law in these areas and helping to forge new policies that reflect changing times. Dunlevy lobbies on behalf of the real estate section of the Minnesota State Bar Association, and he devoted over 500 pro bono hours in the legislature during the crisis, helping to craft workable legislative responses to the critical needs of both lenders and borrowers.

“There were a lot of well-intentioned people there who wanted to address the problems that consumers were having, but not many of them really knew the process,” Dunlevy explained. “So I ended up either drafting or editing a lot of the foreclosure amelioration legislation that came out during those years. There have since been many legal challenges to foreclosure by advertisement. I will not be surprised if we see the courts make it impossible for foreclosure by advertisement in Minnesota, because they’ve increased the scrutiny to a standard of strict compliance. It’s a pretty high standard. One of the problems with undermining non-judicial foreclosures is that consumers end up paying more for loan originations, and they also end up paying more if they redeem due to the higher attorney fees.”

Dunlevy helped craft a process to utilize foreclosure counselors early in the foreclosure process, so consumers would have a smaller nut to crack. “The bar association is nonpartisan and it doesn’t take a position on partisan issues. But from my experience in the legislature, the best legislation comes when there is consensus from both parties. In my personal view, the wisdom is in the center, not on the extremes.”

In addition to his contributions to state law, Dunlevy has also volunteered his expertise where it was needed internationally. Through the Center for International Legal Studies in Salzburg, Austria, he traveled to Ukraine, where he spent a month teaching real estate legal principles to law students in that developing country.

Here at home, the American Dream endures through good economic times and bad. It is a fundamental part of our national heritage, and a right that separates us from countries that do not enjoy our freedoms. The maintenance of this precious birthright requires strong and upright advocacy, so the viability of home ownership will endure for the next generation. Beisel maintains that “real estate has always been here and always will be here. It’s a great area of law to be involved in. The concepts tend to be universal – peaceful enjoyment; secure boundaries; passing the asset along to family members; using it as collateral for business activities or loans. People still want to own homes and invest in real estate. The system usually works well, but when there are problems, we are ready to help.”