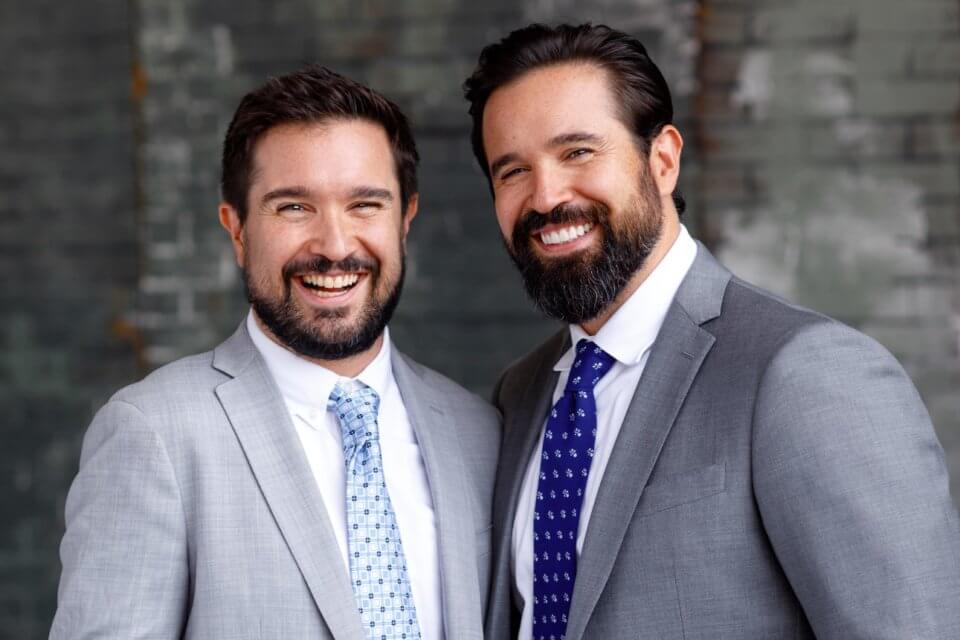 Brothers Wilbur and Orville Wright revolutionized ground and air travel. George and Ira Gershwin took over Broadway with their tunes and lyrics. And now Bob and Brad Simon aim to change the practice of law for both client and counsel. The twins and founding partners of the Simon Law Group believe when it comes to handling cases, two heads (or more) are better than one. As they mark the 10-year anniversary of the firm and their combined 20 years of practice, they say they are building on what works for them.

“Everything is by a team,” says Brad of the workings of their personal injury firm. “It’s not like this is my case, or this is Bob’s case. Everyone is working on the same files in real time.”

The firm’s five offices span San Jose to San Diego. A senior attorney heads a collaborative effort by three or four other attorneys who prepare the case and take it to trial.

“We try cases as a team and litigate as a team,” says Bob. “We let specialists specialize. We think everything runs better that way.”

What They Do Best

Brad and Bob focus on the areas in which they excel. For Brad, he says, that means overseeing the day-to-day operations of a 65-employee staff.

“I’m wearing all the hats and taking a macro-level view to make sure everything is running smoothly,” he says. “If someone tells me the client’s name, I usually know the facts of the case, but I leave the minutia to the other attorneys.”

“Brad is being a little modest here,” says Bob. “He has a photographic memory and remembers every single file. Out of a hundred cases, he knows all of them. It’s phenomenal— you mention a name, and Brad knows everything about the file and what needs to be done on it.”

After Brad takes the broad view of a case, he and a selected team of attorneys move in at the micro level. He offers the members advice and shares with them his gut-reaction to cases.

Teams communicate via real-time chatrooms that are firm wide as well as specific to each file. This invites feedback on the issues from the wide range of the attorneys’ experiences, they say.

“Anyone can chime in if they know the answer,” adds Brad.

Bob says that he’s detail-oriented and needs to know all the facts, but that he can’t—and shouldn’t—do it all.

“We’ve learned as a firm that I can’t micromanage every detail of a case,” he says. “I give the orders and allow others to execute those orders, almost like the military.”

“I grew up playing team sports,” says Bob. “I draw on that experience to see things from a different perspective and see things as a team, and that delivers results for the clients.”

Clients aren’t the only ones who benefit from the Simon brothers’ collaborative style. They’ve drawn the attention and admiration of attorneys in the Los Angeles legal community and beyond. Brad cites Bob’s welcoming and open demeanor as a contributing factor to their rising profile.

“Bob is always there to talk,” Brad says of his twin. “Attorneys will ask Bob his advice about cases, and he will let them know what he thinks. His phone is always buzzing. We’re here to share information with attorneys around the country.”

This led to the creation of the Justice Team Podcast. Released bi-monthly and regularly hosted by the three Simon brothers (Bob, Brad and Brandon), the podcast has over 50,000 streams and a national audience.

Bob also mentors at every level—from Pepperdine Law School students to junior and senior attorneys. Brad relays an example of Bob’s dashing from the courtroom after a trial’s closing argument and then driving to Malibu to speak with young attorneys about trial advocacy.

“I don’t know how he does it,” Brad says. “Maybe we have a triplet we don’t know about.”

“We’re interested in industry-wide solutions, not just firmwide solutions,” says Bob. “I am a big believer that a rising tide lifts all boats.”

According to the brothers, the challenges in the industry include lack of advancement opportunities for young attorneys, the legal system’s failure to embrace technology, and firms not capitalizing on their employees’ efficiencies.

The answers, they say, are found within their new Justice HQ model of legal practice. Founded by the brothers and set to open with its first office in Downtown Los Angeles this quarter, Justice HQ is an exclusive membership of consumer attorneys, many of them young solo practitioners, who collaborate to share expertise and also practice on a primarily virtual basis. (To learn more about Justice HQ, see “Robert Simon on Justice HQ” in Attorney at Law Magazine’s Volume 5 Number 5.)

“Brick and mortar practices are not going to exist in five years,” says Bob, crediting technology for the shift. “Clients don’t need the gray-haired attorney in an expensive office anymore. They can meet their attorneys in a coffee shop or a shared office space.”

The concept is boosting the opportunities for young attorneys ready to sink their teeth into taking a case to trial rather than put their time in at a large firm handling the menial tasks for the seniors, Brad says. It’s a concept the Simon Law Group is already embracing.

He paraphrases LeBron James, who joined the Cavaliers as a teen, when he questioned why professional athletes were expected to go to college: “Why should they sit in a big school and wait for their time when their time is now?”

“Tools like working in the cloud can be taught,” Bob says, “and if we can bring technology and efficiency into the picture, we can give attorneys more time with their clients at a lower cost.”

Resistance exists, Brad says, but innovation must take over.

“The law is way behind in technology,” he says. “Courthouses are still requiring reams of paper. Some courthouses are getting caught up finally, but we’re killing tons of trees with things that can be accomplished with an iPad or a click of a button.

“Attorneys can do most of everything from their phone, at home,” he adds. “They can come to the office when they need to, but they’re wasting productivity on the road.”

Brad says what makes people happy is to spend time with their family.

“Most people don’t want to work Christmas Eve and drive home in traffic,” Brad says. “Let’s bring people the joy that they deserve. That brings better results for the client.”

Embracing technology in the Justice HQ model solves the young solo attorney member’s issue of navigating a new career with the pressures and distractions of running their own practice, as well as capitalizing on their strengths.

“For self-employed or solo attorneys, more than half their day is consumed with non-legal items like mail, bills, medical coverage and records,” says Brad, “that takes away from their real talents.”

In the collaborative, cloud-based Justice HQ set-up, he says, the solo attorneys are not only relieved of wearing the office manager hat, they can contribute to a case in the best way they see fit, further raising attorney productivity and client service.

Bob cites the brothers’ different competencies that make them two parts of a whole—Brad’s superior writing skills and Bob’s gifts as a winning litigator—as the basis for the idea.

“Not every Bob has a Brad and not every Brad has a Bob,” he says. “Our philosophy is that you do what you’re good at, and someone else can do what they’re good at. Let’s find the best solution to fill the void … so you can excel.”

Extending beyond the offices of the Simon Law Group and Justice HQ, Bob relates this wisdom to any attorney’s practice.

“Whenever people ask me for mentorship, I ask, ‘What do you want to do as a lawyer? And why aren’t you doing it now?’” he says. “I tell them, ‘You should find a way that 80% to 85% of your job is what you want to do and what you enjoy doing. If you’re not doing that, you’re losing sight of what this profession is.’”

It’s obvious the brothers enjoy what they’re doing. Their biggest triumphs, they say, are not the verdicts themselves, but watching their trial teams achieve their wins and thrive in their practices and their personal lives.

“I enjoy others’ success more than my own,” says Bob. “I love delegating trust in those young lawyers and then see them hit the home run themselves.”

Bob and Brad had their own supporters early on, too.

For Bob, it was highly acclaimed personal-injury attorney Gary Dordick, whom Bob still speaks with every other day and considers a best friend.

“I never found a mentor in the legal profession,” counters Brad. “My parents were my mentors in the general sense. They taught me the honest way is the hardest way, but that it’s the most rewarding, and that doing the right thing will have the best results in the end.

“Our parents work for us now,” he adds, “but we take their advice and counsel whenever we’re making business decisions.”

“I wish Brad was my mentor because he gave the correct answer,” laughs Bob.

Looking Back and Ahead

As they mark the 10-year anniversary of the Simon Law Group, they recall how far they’ve come.

Bob describes the uncertainty and untimeliness of getting paid for cases in their early years, even on strong successes and verdicts.

“We don’t get paid per hour. In the words of legendary PI attorney Brian Panish, ‘We get paid perhaps.’ And there were years we got paid zero,” he says, adding that they still had the tasks of providing health insurance to employees, finding office space, and creating the right atmosphere at the firm—all while sticking to their commitment to do the right thing.

A challenge that has persisted over the decade, Brad says, is finding good attorneys to co-counsel with.

“CA has a lot of lawyers,” he says. “Most of the time, the attorneys that consumers find are the ones paying the most for pay-per-click. Clients get slighted when they’re stuck finding an attorney by looking up a billboard and listening to the best jingle.”

Brad laments that too often consumers’ understandable lack of experience in hiring attorneys leads them down a poor avenue of recovery for their suffering.

“They don’t know they could have achieved more,” he says. “Our commitment is to ensure the consumer is met with the best advocate for what they’re trying to pursue.”

While holding to their core principles of ethics and civility, Bob and Brad aim to take 100 cases to verdict this year and plan to expand both the Simon Law Group and Justice HQ throughout the country. The brothers say they are more focused than ever.

“We used to look to others for that mentorship,” he adds. “Now other firms look to us.” 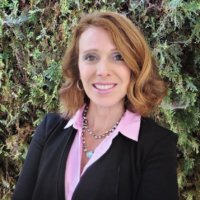 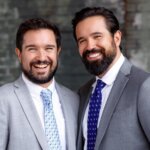