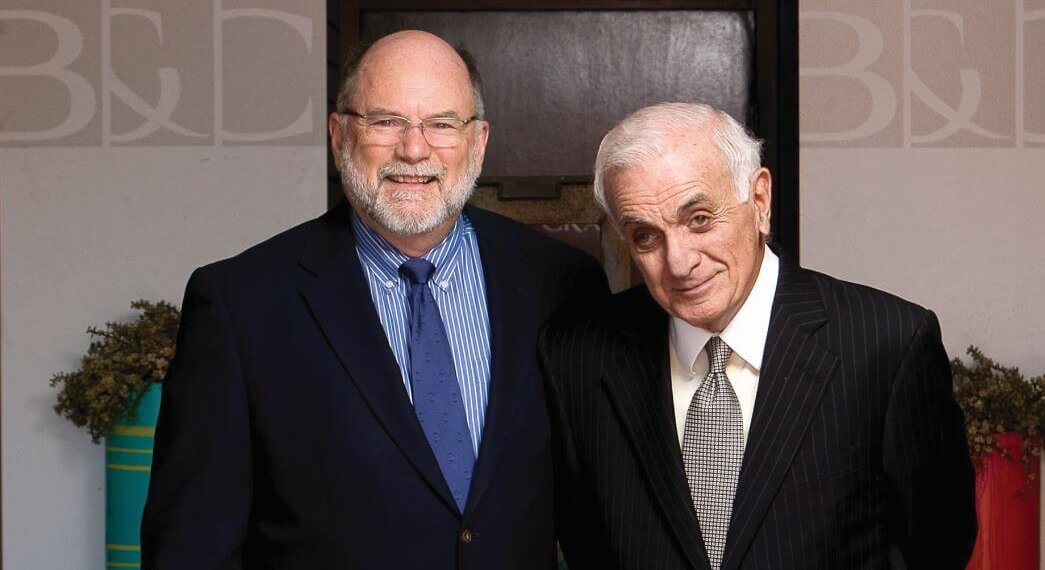 Ten years ago,the Phoenix law firm of Burch & Cracchiolo celebrated its 35th anniversary with what president and CEO Ed Bull calls a “big, blow-out party.” This year, as the mid-size firm turns 45, it is marking the milestone through smaller client appreciation events designed to commemorate both the firm’s shining history and its bright future.

“We are doing some lower key things to ensure long-time clients know how much we appreciate their long-term business,” Bull says. “We are also making sure they and our associates in the community know that even after more than four decades, we are still growing, moving forward and looking to the future.”

Since its founding by real estate attorney Frank Haze Burch and trial lawyer Dan Cracchiolo in 1970, the firm has grown to more than 40 lawyers. Its paralegals and other staff bring the firm’s employee population up to nearly 100. In addition to the main Phoenix location, there are offices in Las Vegas and Orange County, California. The firm is also a member of Primerus.

“The firm started out with four lawyers who promised themselves they would never be bigger than that,” Bull says. “But they got so busy they needed to grow and add practice areas and here we are today. Today’s size works well for us and we are able to cover almost all practice areas that individuals and businesses in Arizona would need.”

While the current mid-size is the right fit for Burch & Cracchiolo, the firm continues to grow and embrace the future in important ways, including staying on top of technology. Even though many of the attorneys and other staff came to the firm long before the Internet – seven people have been there more than 35 years – they have not been afraid to jump into unknown territory, such as instituting an active social media program to better market the firm and communicate with clients and the community.

Both of the firm’s founders had deep roots in the Phoenix area. Burch, who passed away in 2005, was born in Phoenix. Cracchiolo was born in Detroit but raised in Arizona. At 86 years old, Cracchiolo continues to practice law and is a noted leader in the Arizona legal community.

Bull, who is a certified specialist in real estate law, began working at the firm following his first year of law school in the late 1970s. He came onboard as an attorney after passing the bar in 1980. He notes that like him, many of the attorneys have spent their entire careers with the firm. He attributes that loyalty, in large part, to the firm’s culture of integrity, honesty and mutual respect and believes that people appreciate working in a place that displays those characteristics. Employee satisfaction is perhaps exemplified by the fact that the firm has been honored several times by the Phoenix Business Journal as one of the best places to work in Arizona.

“Integrity is something that is critical no matter what you do for a living,” Bull says. “I am a farm kid from Nebraska and you are as good as your word. We have no patience here for people who have low integrity or who are dishonest or rude.

“We are one big team and we are all in it together,” he continues. “I don’t care whether someone is a senior partner or our most recent hire, everyone is a member of the team and everyone is deserving of mutual respect.”

The firm’s core values extend to its clients. “Our clients pay for and deserve intelligent and hardworking attorneys,” Bull says. “I encourage lawyers to treat clients and everybody else the way they wish to be treated. If we take good care of them, work hard for them and treat them fairly, we will have clients for life.”

Burch & Cracchiolo’s attorneys and staff not only care about their clients, they also care deeply about their community. Many of the firm’s employees are involved in a variety of community service endeavors. This legacy of caring about the community and the people in it started with firm founder Burch, whose father, Haze Burch, was the first active duty police officer to be killed in the line of duty in Phoenix in 1925. Frank Haze Burch, who was 5 years old when his father was killed, was one of the first members and supporters of the 100 Club of Arizona, which helps the families of law enforcement and other public safety professions who are injured or killed on the job. Cracchiolo is the chairman and former chief executive officer of The Steele Foundation, which awards grants to nonprofit organizations throughout Arizona and helped create The Steele Pediatric Research Center at the University of Arizona.

“We are good people doing good work for our clients and the community,” Bull says about Burch & Cracchiolo upon the firm’s 45th anniversary. “We believe honesty, integrity and hard work will bring excellent results.”