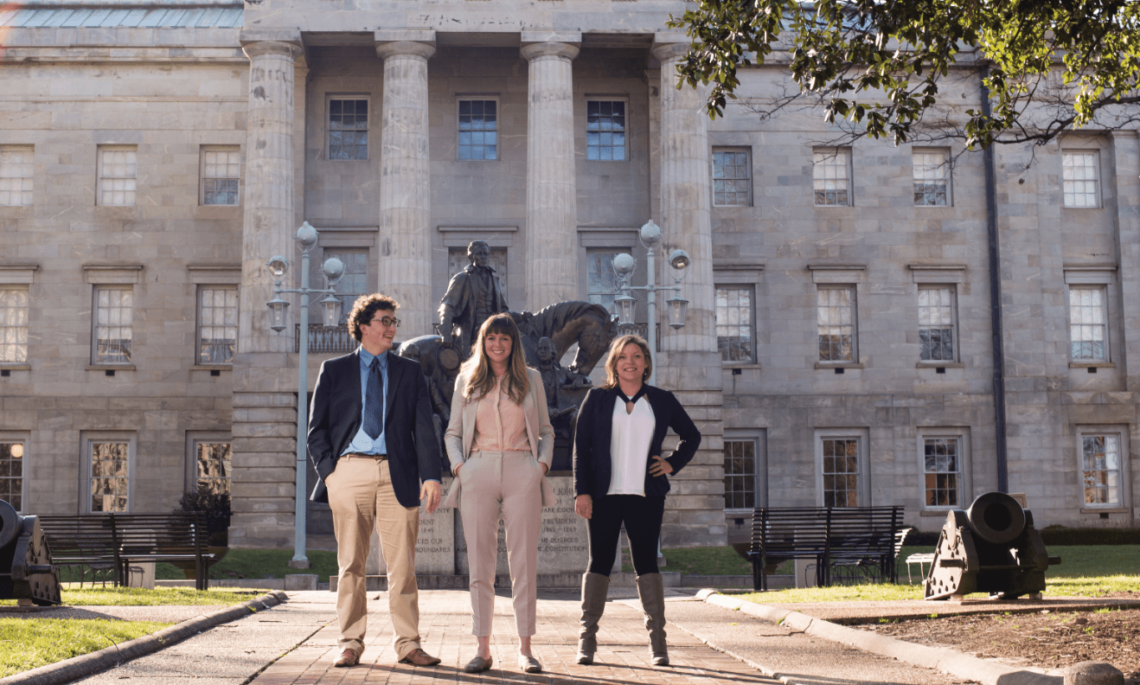 “It wasn’t something we replicated from other law firm models. It was something we felt was really original and we still feel that way,” said Dowell.

“We’re trying to share our individual personalities because we are all different but most importantly, we are all approachable and laid back. You can call the office and talk directly to any one of us,” said Buyrn. “I think being approachable is one of our biggest assets.”

Amanda Buyrn is from Chesapeake, Virginia, where she grew up working in at her father’s law firm. Kyle Smalling has a degree from NC State in chemical engineering which has given him a foundation to work with small and startup technology and IT companies. Katie Dowell is from Raleigh. Early in life she set her sights on the law. Dowell graduated from NC State with a double major in political science law and justice and philosophy of law.

The three met at Campbell Law School where they competed with and against each other in moot court.

During their last year in law school, the idea for Capital City Law was hatched as “Plan A” for when they graduated. “There were a lot of details, hours and hours of meetings, lots of pizza and ramen noodles,” recalled Dowell.

Buyrn, Smalling and Dowell each interviewed with large firms but ultimately came back to Plan A. “Once we decided on who the partners would be and hammered out the details, we all agreed ‘we’re gonna rip off the band-aid and do this,’” said Dowell.

A significant part of the business plan from the beginning was the use of social media.

“Social media provides a platform to interact with the community in a way that was unheard of before. It’s not like traditional advertising; it’s a forum,” said Dowell “On Twitter, for example, you can communicate with other companies, other law firms and clients can ask you questions directly.

“The benefit for clients is that they get to know us in ways they don’t get to know other attorneys. I think that provides some level of comfort to our clients,” Dowell continued. “We wanted people to think of us as people first and lawyers second and diminish the intimidation factor of coming to an attorney for some of the most important things in your life.”

“Our social media does not say, ‘Call us if you’ve had an accident’ or ‘Call us with your problem,’” said Smalling. “Instead, it displays the kind of people we are. We want to make clients feel welcome; we want them to get to know our personality because that’s going to drive the attorney-client relationship. It’s not just an advertising platform to solicit new business.”

Buyrn, Smalling and Dowell eschew traditional networking events hosted by business and legal organizations. They prefer to network in social settings where they can meet potential clients who are owners of homegrown, small companies and frequent some of the same downtown bars and restaurants they do. “We expect our market to be younger because of the tech and social network focus,” said Dowell.

“They are people we have drawn in because of our image and they are often bluecollar, younger, and non-conformists,” said Smalling. “I think we are good about that kind of relationship because we are younger and engage in social events a little bit more, having these conversations that lead to a result that is in line with the client’s needs.

“People thinking about starting a small business, people who have a small business or are thinking about growing their small business appreciate that they can walk in here and talk to someone who has done it recently, not 20 years ago,” Smalling continued. “Most of them are companies doing the same thing we did. They are willing to go against the status quo; they are willing to take risks. I can tell them, ‘I did it and you can do it too.’ And I tell them how we did it in this economy, not the one 20 years ago.”

Capital City Law’s lawyers and clients also share a similar need for flexible schedules. The firm leverages technology to meet these demands. “I can do the same level of work from my desk at home after my 2-year-old daughter goes to sleep at 8 or 9 as I could do at the office,” said Smalling.

Buyrn is known for starting her days in the late morning and working well into the night. “I have a client that always calls at 7 p.m. and I’m often able to answer it. I’m not a 9-5 person and I acknowledge that many others aren’t either. We’re more than willing to make those type of accommodations.”

In fact, Buyrn, Smalling and Dowell plan to be here into the future. “We are 1-yearold. We are three baby lawyers with no big firm experience, much less managing one. Our business has grown. We are doing very well. As new lawyers trying to build a law firm in something other than the traditional model was exciting and scary,” said Dowell.

“And we still like each other. That’s key,” added Buyrn.