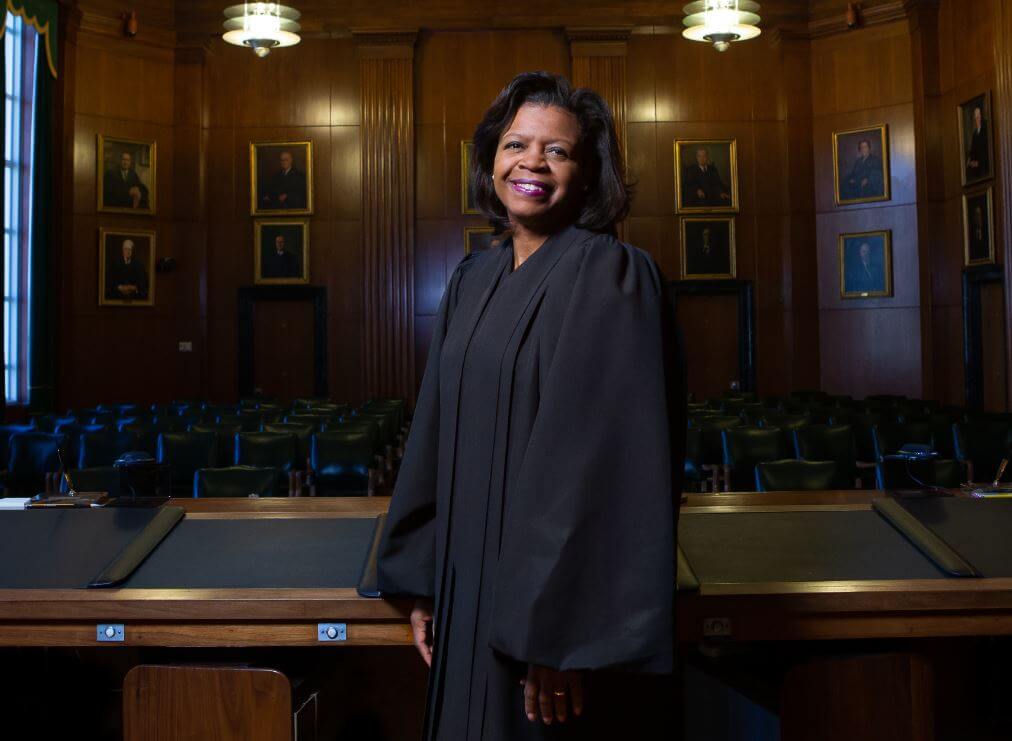 She had served as an associate justice on the high court since 2012 when she was appointed by Governor Bev Perdue to fill the vacancy created by the retirement of Justice Patricia Timmons-Goodson.

AALM: You will always have the prefix “the first African-American woman to be chief justice in North Carolina” associated with your name. Is that a burden? Would you prefer to be known strictly as a great jurist based on your accomplishments?

Beasley: I don’t think it’s a burden at all. It’s a great honor. This is 2019, and you know, it’s time. I’m okay with being an African-American woman. It’s been a great place to be for the last several years of my life. People will identify me in the ways they want to. I’m very comfortable with who I am, and it is just one of the greatest honors of my life, and so I’m okay with that designation.

People will identify me in the ways they want to. I’m very comfortable with who I am, and it is just one of the greatest honors of my life, and so I’m okay with that designation.”

AALM: Your mother was the dean of social works programs at several universities. Did she press you toward a career in social work or was that something you picked up organically?

Beasley: Early on service was very important in our home. I was volunteered by my mom often for campaigns or Red Cross efforts or just community efforts; we spent a lot of time giving back. At some point, it became less of an expectation and more of an opportunity for me in my own right to think about how I wanted to live my own life and how I could make a contribution.

Beasley: I started playing flute in the third grade and played all through high school. I was in the Nashville Youth Symphony Orchestra and did really well. I applied to a lot of undergraduate schools, one of which was Julliard, where I was accepted. I certainly thought about it, but I didn’t see a career in music. I’ve enjoyed it recreationally on and off through the years with family, the people who love me the most. It’s fun playing with my sons. They are great, consummate musicians. It’s great for them to let me play with them now and then.

AALM: So instead of Julliard, you chose the Douglass College of Rutgers University.

Beasley: I really wanted to go to school in or near New York City. Douglass College, at the time, was the largest women’s college in the country. It was an amazing opportunity to be able to study with women, many of whom were in leadership — a lot of great internships. I had an opportunity to go as part of an internship with the State Department to see Justice Sandra Day O’Connor then go to San Diego for a women legislator’s conference. Some of the classes were just women, and it was really nice just to have women supporting and encouraging each other.

AALM: You took a year off after graduating from Douglass and worked for the Tennessee Human Relations Commission where you investigated cases of discrimination based on race, gender, disability and religious affiliation in places of public accommodation housing and employment.

Beasley: It was probably there that I really thought about law school. I had amazing people with whom I worked. I saw them work staunchly on behalf of people who were really in need. That made a really big impact on me.

AALM: A few years after graduating from The University of Tennessee College of Law you joined the public defender’s office in Cumberland County, North Carolina.

Beasley: That experience gave me a much greater appreciation not just for the practice of law, but for the belief in humanity and for understanding that all of us come from very different backgrounds and have a plethora of life experiences, but, generally speaking, we all have the same hopes and dreams and desires for ourselves and for our families and our communities. It was really a good foundational experience in being a good lawyer and then going forward with my service as a judge.

AALM: As a public defender and later as a judge you saw an endless line of people come through the system with similar issues. Did you ever feel like it was an endless, uphill battle?

Beasley: It wasn’t just the people charged with the crime. It was their families, their moms, their children, the people who relied on them or whatever the community support system was, and they were clearly challenged. And often the same folks who were charged with crimes had also been victims of crimes. Their experiences offer me an appreciation for all of us. That a lot of people are really struggling in their lives and ought not be discounted.

And often the same folks who were charged with crimes had also been victims of crimes. Their experiences offer me an appreciation for all of us.”

I never got numb. I was fully aware that every single day, somebody and somebodies were depending on me to get it right. Getting it right didn’t necessarily mean getting them off, but it meant doing my very best for them.

AALM: Is being chief justice going to be a fun job?