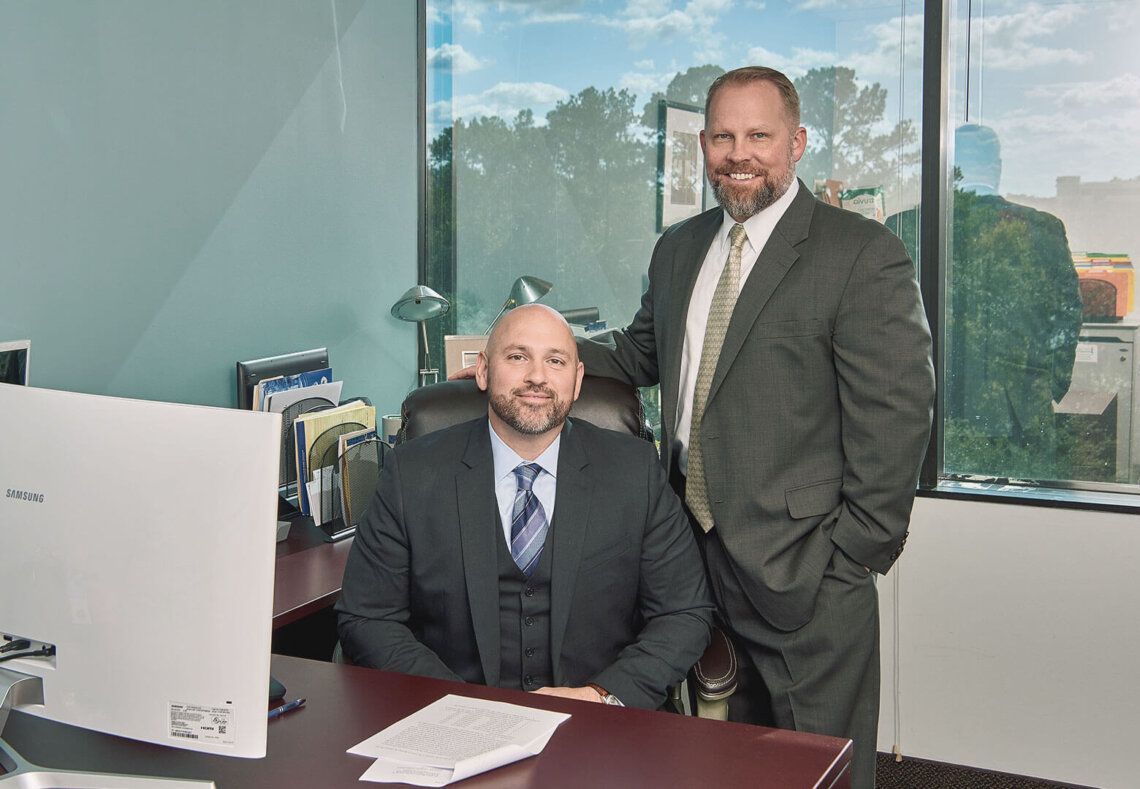 Whether facing off in the courtroom or on a ball field, Chris Cobb and James Gonzalez always shared a mutual respect. And, while they initially became acquainted from across the courtroom aisle and opposing dugouts, it became increasingly apparent that they shared more commonalities than differences.

“Over time and many conversations, it became obvious to both of us that we shared philosophies not only about legal matters, but in business and most importantly in our desire to find ways to improve the practice of law,” Gonzalez explains. “Eventually, we began to discuss how by working together we could try to make a positive impact and help move things forward.”

These conversations led to the creation of Cobb & Gonzalez, PA which has proven to be a formidable legal force within the Jacksonville community, specializing in construction and business law. This robust firm is comprised of a team of highly skilled professionals who combine progressive thinking, hard work and advanced technology to help ensure clients achieve their own business objectives. Indeed, Cobb and Gonzalez have taken the concept of “team” to a whole new level.

With a clear concept and ambitious vision, these two accomplished attorneys set out to create a firm that would reflect their ideals of how law could and should be practiced. Even their firm motto is an explicit commitment to the concept they conceived together: “Excellence is the foundation we stand on to reach higher.”

“There are external and internal processes,” says Gonzalez. “What I mean by that is, there are ways to improve the practice of law internally within the law firm as well as external methods. For instance, internally we are trying to implement a culture that encourages professional autonomy. We work with very talented attorneys and we put enough trust in them so they feel as though they can make an impact on their cases and clients and not have to be sitting at a desk ‘reporting in’ every morning.

“We encourage open communication and collectively come up with ideas on the best way to handle cases,” he continues. “The key is them knowing that they have our full support and trust.”

“I think we also try to offer a platform so the lawyers here can be the best professionally they want to be,” adds Cobb. “You can come in and do your job, or you can use it as a platform to launch yourself into what we would consider greatness. One of the things that I always ask is, ‘What are you doing to separate yourself from the pack?’ In other words, what are you doing to distinguishing yourself?”

Cobb and Gonzalez, both experienced legal professionals, lead by example. For instance, Cobb’s own version of distinguishing himself occurred when he was working at a local firm known for their construction practice. In order to set himself apart, Cobb applied for and was appointed by Governor Rick Scott, to a position on the Construction Licensing Board. In 2017, he was selected as the youngest Chairman of the Construction Licensing Board in its history.

“That kind of differentiated me from the pack,” he says. “Now, I get cases from all over the state. People refer me because I’m seen as the ‘construction licensing guy’.”

Similarly, Gonzalez handles a lot of government construction contracts as a result of some of the work he’s done while serving our country in the Air Force JAG Corps.

“I also perform quite a lot of construction contract review,” he says. “That’s something we offer our clients when they have a government, construction or business contract, because we have the know-how and experience to advise them and walk them through the process.”

Both men have been practicing law for many years, and over that time have been affiliated with various firms throughout the Jacksonville area. As with every career, it has been a growing experience for each of them, one that they liken to their experiences while playing baseball. Cobb and Gonzalez both played ball throughout high school and college and Cobb even played for a while in the minor leagues with the Montreal Expos organization.

“You change teams throughout your adolescent and college years and learn from all the various coaching provided,” says Gonzalez. “You take the things you like and discard those you don’t. That’s kind of how we’ve approached putting this firm together, taking the concepts and strategies learned from those mentors and practices that we valued and implementing them here. Some strategies, of course, needed to be adjusted or tweaked to fit our vision.”

“We are very much like-minded in that,” agrees Cobb. “We discuss these prior experiences and ideas; discard the prior experiences we feel were ineffective and implement those which we know have worked and fit our group and culture. I think the platform we have now allows people to be more flexible with their office time. You know, I think there is a somewhat dated perception that in order to be a great lawyer you must sit at a desk for 12 hours a day. You still need to work very hard, but the reality is, with online capabilities, web research, phones, messaging, the internet and video conferencing, you don’t have to be sitting at your desk to be effective.”

“Frankly, I would argue that you can’t lawyer from behind a desk,” he adds. “You’ve got to get out and meet people. You need to be out there where it’s happening – on job sites, in association board meetings and at inspections. We certainly don’t measure our attorneys’ value or productiveness by how many hours they clock at their desk. We trust our lawyers to do and be their best. The results, or lack thereof, will speak for themselves.”

MEETING OF THE MINDS

It seems there is always a defining moment when fate, providence or what have you, steps in with the big “ah-ha” reveal. For these two seasoned ballplayers, who had, as previously mentioned, always held one another in high esteem, that moment came not as one might expect in a courtroom or in the quiet seclusion of a law office conference room. It came on a ballfield. Not with a grand-slam or awesome triple play, but instead with an unfortunate injury.

“We could bore you with stories of our individual years of playing ball, but really the most competitive ball Chris or I played was in the JBA softball league,” Gonzalez pauses, as he and Cobb exchange wry smiles.

“I was the sports commissioner at the time,” he continues, “and I revamped the softball league that dwindled for about seven years. I think it was the first season after I’d put it back together. Chris had his team and I had mine, and we were playing against each other.” “When you play softball,” Cobb interjects, “after a game or two you know who can play and who can’t. So, around 2012 I was playing leftfield for my team and a ball came back and I stepped in a hole in the outfield and tore my calf muscle. I went down like a sack of potatoes. At that time, I’d known James for a few years. When he saw me go down, he came running. I was staring at my leg and when I looked up James was standing there and actually helped carry me off the field because I couldn’t walk.”

“That’s when Chris officially retired from softball,” Gonzalez jokingly adds, while they share a good-natured laugh over the memory.

“I guess the moral of the story is, when you’re down, you always remember the people who help you back up,” says Cobb.

As Cobb and Gonzalez celebrate their first year as partners in the vibrant firm they co-founded, they have taken a hard look at what they’ve accomplished and what they still look forward to. Applying their years of experience, they now find themselves not only players in the game, but also coaches, responsible for every member of the team.

“I realize many firms utilize technology, but we’ve done our research and are doing everything we can to leverage technology,” says Cobb. “We’ve done our best to ensure our attorneys and staff have access to truly, cutting-edge technology. We’re as close to a paperless firm as possible, which I know scares some attorneys with whom I’ve worked in the past, but we’re doing our best to help everyone put their best foot forward.”

“My dad used to say, ‘You never want to be able to blame your tools.’ I guess, we’re striving to provide the best, most up-to-date and effective tools we can, so that everyone in this firm can provide the very best for our clients and ultimately there’s no excuse for anything but the best work,” says Gonzalez.

“Working on or being part of a sports team, you learn how to work in a team environment,” notes Cobb, “but more importantly, you learn to identify good coaching and bad coaching. And there’s another thing, that I think is always in the back of the mind of every athlete, and that is while you may have succeeded and may have done things right, there’s always a way to do things better. Communicating that it in a positive manner is a game-changer.”