Colin King: Fighting To Make The World A Safer Place 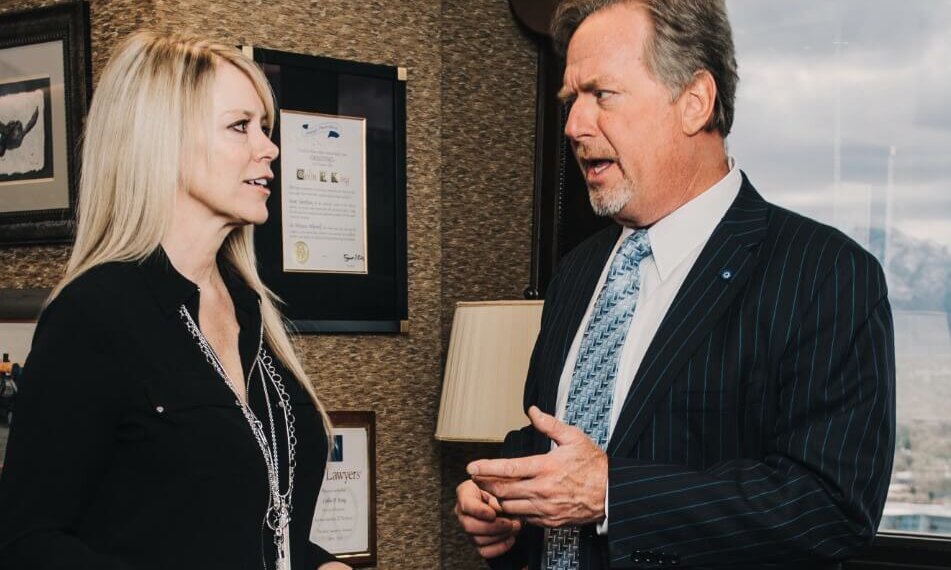 Colin King describes himself as “an under dogger.”

“I’ve been lucky to have the opportunity to help people who don’t have anywhere else to turn. On their behalf, I’m able to face down major corporations responsible for hurting or killing people.” And that’s just what he does.

While no one wants to find themselves or a family member in the midst of catastrophe, many do. Unfortunately, disaster does strike. And, when it does, King is ready to take up the fight for justice. King, a founding member of Dewsnup, King, Olsen, Worel, Havas, Mortensen, is a trial lawyer who focuses his practice on helping those who have experienced catastrophes in their lives due to defective medical drugs and devices, medical malpractice, product malfunctions, workplace injuries and major motor vehicle accidents – either the client has been catastrophically injured or he is representing the family of someone who was killed.

King’s cases have involved a variety of circumstances, but it’s always about helping others. One of the first cases that put him on the map when he was just a young lawyer involved an 83-year-old woman who had lost partial sight in one eye when an aluminum soda cap had blown off a bottle and hit her in the eye. King took the case to trial against 7Up, which was responsible for maintaining the machines that threaded the bottle caps on. The company offered to settle, but King said no and took the case to trial. The jury awarded the client over $10.5 million because they found that 7Up had been aware of the problem, but had deceived customers about it.

He has sued many oil field owners and equipment manufacturers for people injured or killed on oil derricks, drilling sites, work-over rigs, and hot oil equipment, like those in the Uintah Basin in eastern Utah.

In 2007, the Crandall Canyon Mine disaster made national headlines for weeks. Six miners were killed when the mine collapsed; three more were killed trying to rescue them, and a number of others were injured.

King was the lead lawyer on a case against the owners of the mine, suing for negligent oversight. King and his partners filed the first lawsuit on behalf of the coal miners’ families, and won a large eight-figure settlement after two years of work.

“I’ve tried and settled a number of very successful medical malpractice, product liability and major motor vehicle cases in the last few years for multimillion-dollar-results. One of my last jury trials resulted in a $3.1 million verdict,” he shares.

What He’s Most Proud Of

Not only does King win on behalf of his clients, but one of the things loves about his job and being a trial lawyer is that “it has been my goal not only to get compensation for my clients, but to change the conduct of the people or corporate entities that harmed them. I always tell my clients that part of what I want to do for them is change the conduct that caused this death or this injury so it doesn’t keep happening to other people. Often, lawyers overlook that. But I don’t. I’m proud of the fact that I have a very good track record of obtaining commitments by defendants at the time we close the case showing us what they changed in their policies or procedures at the hospital or clinic, or how they’ve changed the design or function of a piece of a equipment or other kind of product so that other injuries or deaths don’t continue to happen.”

“I’ve often contributed to significant design changes in products and devices that have stopped causing the kinds of the injuries my clients have suffered, and that’s been true of automobiles, bottle caps, mining equipment, oil field equipment, medical devices, and changes to policies and procedures in medical clinics, hospitals, and doctor’s offices.

“So that’s another thing I really like about my job – helping to make things safer.”

For the Love of Practice

Early in his career, King clerked for a Utah Supreme Court justice before heading to a small plaintiff’s anti-trust firm, where he represented smaller companies being beat up by larger ones. In 1990, he launched his current firm with his partners. He recounts three points that epitomize what he enjoys most about his practice.

The first, he says, is that he truly loves helping his clients and getting to know them. He cares deeply, which, over the years, has translated into many long-term friendships.

“I think that because I care more, it makes me a better lawyer for my clients,” he says.

The second thing that King loves about his job is his enjoyment of trying cases.

“I like to go to trial and a lot of lawyers don’t like that. You don’t get to go to trial in most cases, but I work up every cases as if I’m going to take it to trial. My adversaries know that I will try the case if necessary, and I think that rewards my clients with better results. No one thinks Colin King is bluffing when I file a case, and that all I want is to settle.”

The third thing that he loves about his job, and which also sets him apart, he says, is that he truly enjoys the intellectual stimulation.

When King takes on a case – which he does very selectively – he is often suing major corporations. Those corporations have “the best lawyers and experts money can buy,” and he often finds himself taking depositions of and cross-examining people with doctorates or other advanced degrees and specialized knowledge, such as doctors, scientists and engineers. “I love the challenge in trial of cross examining an adverse party or expert witness.”

“These cases often have issues that have grey areas in medicine and the law or cutting- edge issues of science, and I’m dealing with people, often in an adversarial fashion, who are exceptionally bright. There’s so much science and medicine I need to master to be a good lawyer for my clients. It’s fascinating and always intellectually challenging.”

The scope and depth to which Colin King approaches his cases – and his track record for successful resolutions – has earned him many recognitions and awards.

He is particularly humbled and proud that he’s been inducted into nationally recognized trial lawyer organizations, into which one must be invited by recommendations of other lawyers and judges, and only after very thorough vetting by colleagues, adversaries and judges.

He is a member of the Inner Circle of Advocates, which is limited to only 100 plaintiff lawyers in the United States with 50 or more plaintiff jury trials who have obtained seven- and eight-figure verdicts. He is the only active Utah trial lawyer in this distinguished group; his mentor and friend Jackson Howard was the first member and is the only other Utah lawyer in the Inner Circle.

King is a fellow in the International Academy of Trial Lawyers, limited to only 500 trial lawyers across the United States.

He is a fellow of The American College of Trial Lawyers, a very prestigious trial lawyer organization.

He has been a member of the American Board of Trial Advocates for about 20 years, and is a former Utah ABOTA chapter president.

King has appeared in Best Lawyers in America for 24 straight years in its plaintiffs’ tort section, and he has continuously held an AV status for 25 years in Martindale-Hubbell lawyer ratings.

He is a founding fellow of the Litigation Council of America.

King credits working on his father’s and grandfather’s ranches in Utah for his drive to help the underdogs. He was one of five boys and learned to love the law from his father, who had gone to Harvard law school after growing up a cowboy. King’s father was a solo practitioner, as well as a rancher.

King grew up amongst cattle and horses, and he spent many days on cross-country cattle drives during the spring and fall from the Henry mountains to the top of the Boulder mountains. He spent up to 18 hours a day in the saddle, herding hundreds and hundreds of cattle and sleeping out under the stars.

“I learned a lot from those days as a cowboy. I learned to have a tough skin. I also learned the value of every last cow, heifer and calf. I think that helped instill in me a sense of caring for the underdogs. Because that was what, in a sense, they were. I learned that that was very important.”

King has played hard his whole life, engaging in many sports, including many years of skiing and “knarly” whitewater kayaking. Nowadays when he isn’t working, he spends time with his wife, Wendy, golfing and hiking, and with his children and grandchildren. He and his family have traveled extensively all over the world.

Colin and Wendy both believe in giving back, and in addition to King’s pro bono efforts, the couple supports the University of Utah’s College of Law with financial contributions. In fact, one of the new training courtrooms has their name over the top of it.

“We think it’s important to support the law school,” he explains. “We think the law is a wonderful thing in the lives of everyone. With all its faults, we still have the best country with the best legal system in the world. I love helping folks obtain access to our courts and preserve justice. “

When asked about his future plans, King says, “I’m at my prime as a trial lawyer. We have a fabulous group of lawyers here at DKOW. I want to work hard and try cases with my partners for many more years.”