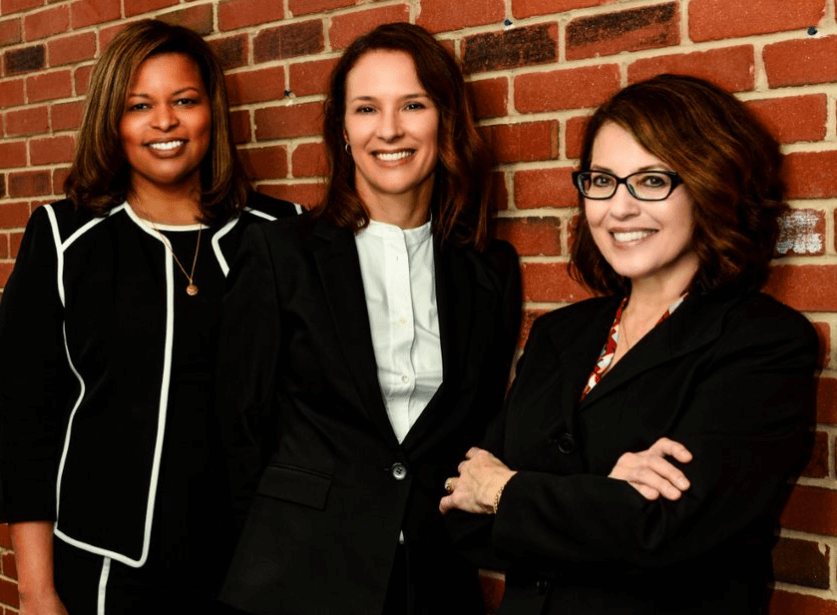 Personal injury law partners Leto Copeley, Valerie Johnson and Ann Groninger of Copeley Johnson & Groninger PLLC are not hesitant about taking cases to trial. “We are disappointed if we don’t go to trial,” Johnson said.

“Preparing to go to trial is challenging. But we like to go to court.”

“There is a reason our founding fathers made sure that the access to civil jury trials was in the Bill of Rights,” said Copeley, referring to the Seventh Amendment which guarantees preservation of the right to trial by jury.

On a Wednesday in April, Groninger was in trial in Union County representing a bicycle rider who had suffered a significant brain injury after being hit by a car. At the same time, in Durham, Copeley and Johnson were preparing to go to trial in a case involving a school bus driver who was injured when the bus he was driving was rammed by an extended cab truck.

They settled the next day, just as the trial was set to begin. “We were geared up and hoping to go to trial,” said Copeley.

“I tell potential clients from the first meeting that I’m going to prepare your case to go to court. Of course, cases get settled before trial for various reasons, but if you want a settlement for optimal value, we must be prepared to go to court,” said Copeley.

“The defendant or the insurance company is not going to take a case seriously unless they know you are willing to take it to trial,” said Groninger.

Copeley Johnson & Groninger PLLC was started in 2011. The three had been partners with Patterson Harkavy LLP, a workers’ compensation and civil rights firm with offices across North Carolina.

Leto Copeley grew up in rural New Jersey. She attended Hunter College in New York City where she earned a bachelor’s degree in sociology. After graduating from Harvard Law School, she moved to North Carolina to clerk for Judge James B. Mc- Millan of the United States District Court for the Western District of North Carolina.

“I was interested in practicing someplace that was not New York. I was looking for an atmosphere that was a little less Type A because I have that Type A tendency.”

Valerie Johnson is from Henderson, North Carolina. After graduating from UNC with a degree in education, she taught second and third grade in Chapel Hill. Johnson then returned to school, graduating from the UNC School of Law.

“I always intended to go to law school, but my family has a long history in education. My father was an administrator, my sister was an elementary school principal, and my brother is a medical school professor.”

Her mother is a celebrated teacher who recently received an honorary doctorate from her alma mater, Shaw University. “My mother was a chemistry teacher who pioneered the use of recycled materials to have enough instructional supplies for her students. She taught me how to make the most of what is available.”

Johnson attributes her upbringing as the reason she is so passionate about her work. “It was a small town, and everyone knew everyone. We all knew to look out for each other. I like to think that I still am looking out for other people.”

Ann Groninger grew up in New York, New Jersey and Michigan. “I was always a bike rider as a kid. I was always trying to ride further and longer. I left home on my bike in the morning, rode around all day and didn’t come back until dinner,” recalled Groninger.

Groninger graduated from Michigan State University with a degree in engineering and earning her Juris Doctor from Tulane University Law School. She puts her engineering degree and interest in biking to use in her practice.

Groninger devotes a portion of her practice to teaching bicycling safety. “I like to think the people I reach are, in the long run, safer. But there are a lot of things a bike rider can’t control. They can control themselves but not other people on the road.”

“I have handled a lot of bike cases, I’ve litigated a lot of bike cases. I understand a lot of misconceptions about how bicycles operate. When somebody calls me and said they were in a crash on their bike, I either have ridden there or dealt with very similar crashes in similar situations and understand what happened. When the defense makes claims that make no sense at all, I know how to explain it to the jury.”

Allegations of sexual harassment in the workplace have long been one of Copeley Johnson & Groninger’s practice areas, well before the emergence of the #MeToo movement.

“It’s interesting to observe how sexual harassment has become a part of our normal conversation,” said Johnson. “I think the focus on the #MeToo movement is a wave that will subside but hopefully we won’t sink to the same depths as before. In the 1990s, there was Anita Hill, but this does not feel like the aftermath of Anita Hill’s accusations. It feels like the conversation is not limited to women who are in powerful jobs. It also includes government, the service industry, and women working in everyday jobs in offices and in factories.”

Copeley and Johnson launched a podcast last year, “The Law Sisters.” Their podcast series about sex harassment and abuse is called “Sex at Work.” Topics have included Title IX, Monica Lewinski, dress codes at work, and how men can be victims, too.

“It’s a chance to reach people. We give lessons in the law and talk about some of the things we are hearing in our employment discrimination practice,” said Johnson. The podcast episodes have about 2,000 listeners.

The members of Copeley Johnson & Groninger are heavily involved in a wide spectrum of bar organizations.

Copeley is the president-elect of the National Crime Victim Bar Association. NCVBA acts a as resource and advocacy organization for crime victims and those who serve them. “Crime victim work is an interesting and developing area of tort law,” said Copeley. “There are unique aspects of the cases to consider; from considering the criminal law involved in the case, to thinking about jury selection and about how the clients are viewed.”

Copeley’s mother-in-law was one of three women living in a retirement home and attacked by an aide. The other two women were murdered. “Having been the family member of a victim I have a sense of what crime victims’ families go through,” she said.

“People like to hear stories. That’s what unites us – our stories. In a trial, we’re telling the plaintiff ’s story in a way that is compelling to people,” said Johnson.

Despite the ever-increasing complexity of forensic evidence, the attorneys have great confidence in their ability to explain it and ultimately in the jury’s ability to comprehend it.

“We try to be very careful about being efficient with our evidence when we put it on,” said Copeley. “In our bus driver case, we were planning to have a number of before and after witnesses get up there and tell what they know about our client and how this wreck had changed his life.”

“I think people are sensitive to the fact that this is really important; to be able to go in and exercise their responsibility as a juror. “People love to talk about their constitutional rights. There are few opportunities to be as close to the Constitution of the United States as when you are called for jury duty,” said Johnson.

“You hear a lot of people talk about trying to get out of jury duty, but once people get seated in a jury box and realize that somebody’s livelihood is at stake, the jurors become invested in it and really want to make the right decision. It might or might not be the decision we agree with, but they try really hard,” said Groninger.

“It is the opportunity for a person who has been injured or wronged to get justice. There is no doubt that justice can be found in the courtroom,” said Johnson.