Dan Boyce: When Everything’s on the Line 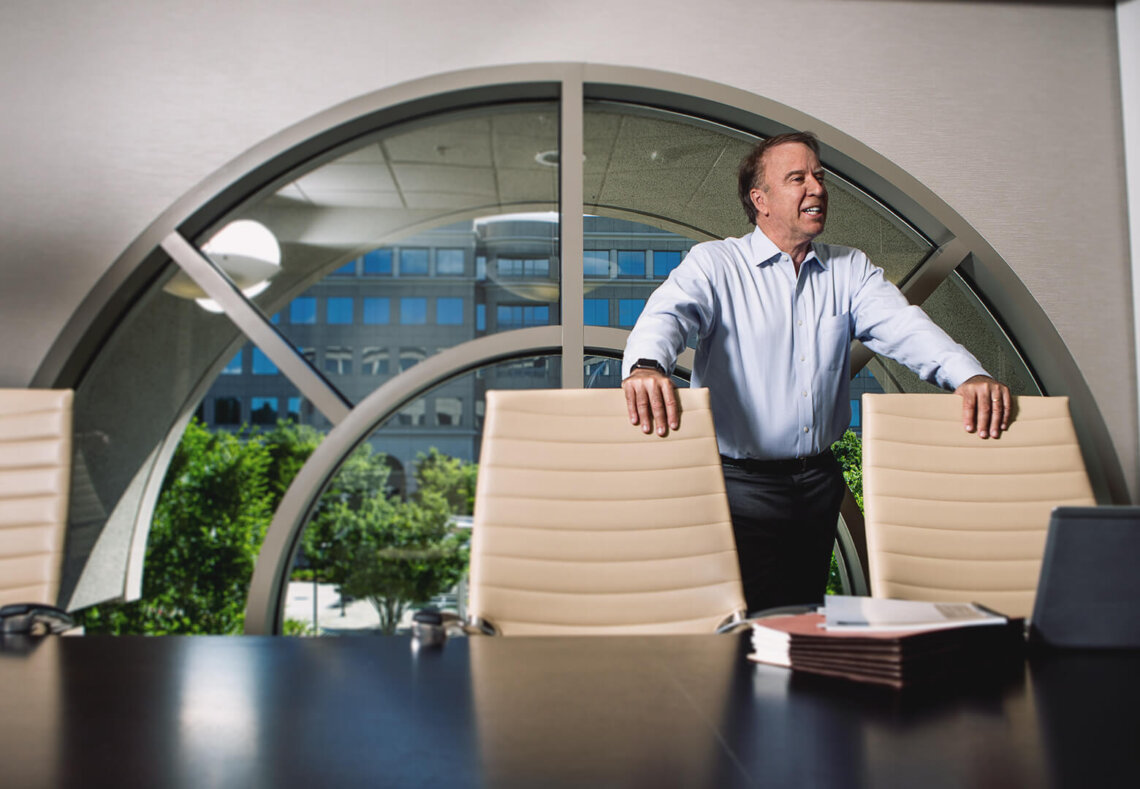 “Hi, I’m Dan Boyce, rush chairman, darn glad to meet you,” said Raleigh attorney Dan Boyce with a grin as members of his team filed into the conference room at Nexsen Pruet with smiles and giggles of their own.

Boyce brings that same quick wit with a twinkle in his eye to his practice along with gravitas and an incredible wealth of experience in high-stakes litigation from his 35-year career.

“I help clients deal with the emotional strain they are under in a moment of crisis. I try to bring a calming influence to the situation and help the client understand there is a light at the end of the tunnel,” said Boyce.

“We work on bet-the-company, bet-the-farm, and bet-the-career – high-stakes cases, where everything is on the line,” he continued. “From an early point in my career, I saw what it’s like for my clients to go through that kind of ordeal. Using my experience, I help our trial team understand how to handle high pressure, high-stakes situations better than other attorneys who haven’t been through those kinds of cases.”

“I’ve heard that an attorney is both a legal counselor and a life counselor. It’s important to be on a personal level with my clients when they’re dealing with some of the most important moments in their lives,” said Boyce.

“In high-stakes litigation, I know my clients are very uncomfortable and unsure on how to proceed. In addition to sorting out the specifics of their legal dispute, I help them understand the judicial system and the formalities, especially in certain courts such as business or federal court. They’ve never been through these situations. Sometimes, humor, at the right time, is the best medicine to put them at ease and make them feel more comfortable with us and with the process. Our team treats our clients just as we would expect to be treated if the roles were reversed.”

R. Daniel “Dan” Boyce was born in Fayetteville and raised in Raleigh. Going into the family business meant stepping into the immense shadow of his father, Eugene Boyce. Gene gained success as a trial lawyer and fame as the lead investigator in the Watergate Hearings led by NC Senator Sam J. Ervin.

“Growing up at the feet of one of the greatest trial lawyers of all time was an extremely positive experience. Even as a young boy, that’s what I wanted to do,” said Boyce.

He graduated from Wake Forest University with a Bachelor of Arts in psychology. He earned his Juris Doctor from UNC.

He lists his father and his father-in-law, Dewey Wells, as his role models. Wells was successful as a trial lawyer, superior court judge, and is in the NC Bar Association General Practice Hall of Fame.

“From my dad, I learned to never give up. He never backed down from a challenge. He’s known for his belief in the judicial system and his willingness to persevere against all odds. From Dewey, I learned honesty, humility, and integrity. He’s a man of great integrity. I’ve heard people call him the Atticus Finch of the North Carolina Bar,” said Boyce.

Boyce practiced with his father for three years then worked in the U.S. Attorney’s office for seven years. He then returned to private practice and worked on class actions, including administration with his father who was the lead lawyer for two of the largest and most successful settlements in the history of NC jurisprudence.

The Bailey class action which was a federal and state retiree case that settled for $799 million and the Smith Shaver Class B Lawsuit related to “intangibles taxes” created by the NC Legislature that had taxed owners of stock in North Carolina corporations. That case settled for $440 million.

“I developed a solid background for class action work from those two cases and thereafter I’ve worked on numerous other cases as both a plaintiff and defense attorney,” said Boyce.

After more than 15 years in a boutique practice, Boyce joined Nexsen Pruet in 2011 because of the ability to draw from a team of attorneys inside the firm with a variety of areas of expertise. “That has allowed us to expand our practice into many different markets,” said Boyce.

“Teamwork is essential. I recently needed expertise in tax, corporate governance, real estate, immigration, and employment issues in the agribusiness, healthcare, and automotive industries for clients who wanted me to represent them. We had lawyers who practiced in those areas.”

“One of the biggest challenges for young attorneys to becoming good trial lawyers is they seldom experience the highs and lows of trial work. Only real courtroom experience can teach you how to fight through a trial whether it’s really dark and nothing falls your way or how to curb your enthusiasm and not overreact when it turns in your favor. The best trial attorneys I’ve worked with have been in the trenches for years.”

Boyce represented LegalZoom when it sued the NC State Bar in 2011. The Bar claimed LegalZoom was engaged in the “unauthorized practice of law.” LegalZoom’s business model offering online document preparation services was unpopular amongst some lawyers because they viewed it as new and unfamiliar competition.

“Some people thought we shouldn’t take on the NC State Bar and that I was crazy to challenge the licensing organization that holds my law license. We concluded that document preparation on the internet was new technology, but not that different from legal forms found in form books, floppy disks, and CD-ROMs. We believed that consumers were entitled to create their own documents,” said Boyce.

I thought that it was in the best interest of the public to allow those services because many users of online document preparation services could not afford to hire attorneys for simple documents,” he added.

Plus, LegalZoom had the right to be represented just like any other litigant, even if it was unpopular with some lawyers,” he continued. “Although I was criticized for having taken the case, ultimately the State Bar worked with us and with the help of some slight legislative tweaks the Legislature fixed outdated statutes. The state ultimately agreed that providing online document preparation services does not constitute the unauthorized practice of law.”

As if the daily competition as a trial lawyer isn’t enough, Boyce’s weekend passions are auto-racing and flying lessons.

“I’ve taken them up late in life. I joined a racing team. We find old cars that aren’t fit to drive on the road; rebuild them and make them safe and functional; and then see if the cars can survive an entire weekend driving around a track. I’m also taking flying lessons. My family jokes that I have a ‘need for speed,’ and I admit, it’s awfully fun,” said Boyce.

Boyce’s wife, Betty, is a retired nurse. They have four children – Robert 27, Sarah, 23, Will, 38, and Hunter, 35. Boyce and Betty have four granddaughters, Leavie, Miller, Alice and Margaret. “I must admit I am more proud of my family than I am of my career,” said Boyce.

Boyce said he learned a lot from practicing with his father, but the practice of law today is more complex.

“Gene’s known for saying, ‘Let’s just put 12 in the box and let the jury decide.’ He had cases that went to trial without doing much discovery. With today’s complex litigation, a lot of our time is spent digging through a million pages of documents until we find the smoking gun,” said Boyce.

I learned from Dewey the value of diplomacy and keeping an open mind in negotiations,” Boyce said. “I am honest with my clients, not every case should go to trial. And a good trial attorney recognizes when it’s time to talk settlement.”

“I hold true to the basics of hard work, perseverance, passion, compassion and caring about your clients just as my father and father-in-law did in the ’60s, ’70s, and ’80s in the midst of their successful careers. We all believe the bottom line is it takes hard work and preparation before and during trial. I hope I can measure up to their standards.”