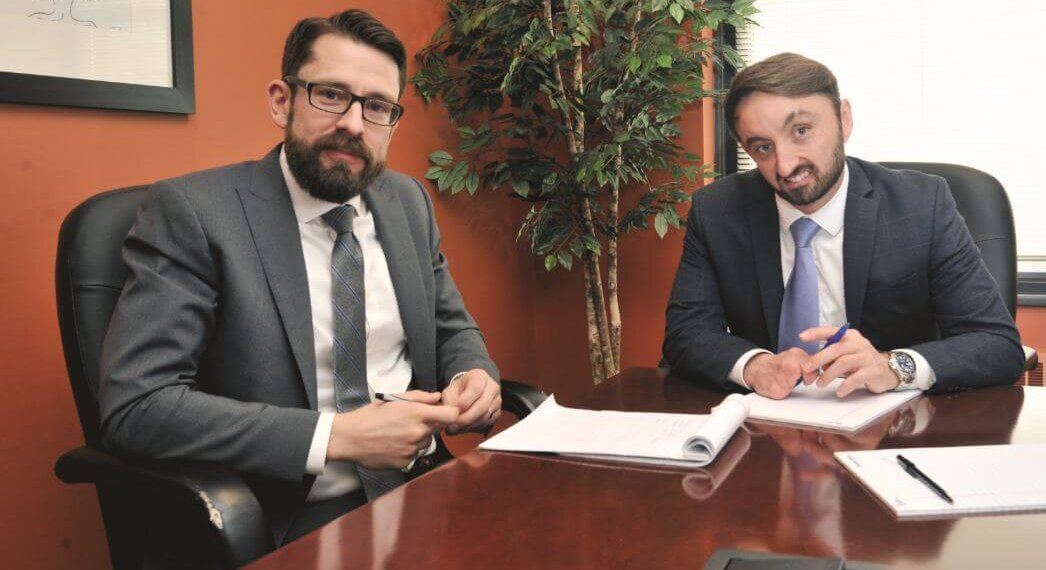 The offices of Schaefer Halleen LLC, are located in downtown Minneapolis, just across the street from the U.S. Federal Courthouse. From their vantage point, the firm’s attorneys can see the courthouse plaza below. Recently, some of them left their desks to fight the good fight alongside the throng of citizens who gathered there to protest the federal government’s stance on immigration. This action is characteristic of the work these attorneys do every day, as passionate advocates for the rights of American workers. Attorneys Darren Sharp and Peter Christian are both former educators who answered the call to social justice advocacy.

After graduating from college, Sharp (a fluent Spanish speaker) joined the esteemed Teacher in Residence program to teach social studies at a middle school in Denver with a high Latino population. While helping the kids, he got close to their families, and he became cognizant of other social struggles they were facing, including workplace discrimination.

Likewise, Christian was selected by the Teach for America program to teach fifth grade students in the nation’s poorest community, located in the Mississippi Delta. The students’ economic disadvantages fueled other social problems, and as a result, those children were far behind their peers academically.

Both Sharp and Christian were inspired to make a difference beyond the classroom, and both found their way to Schaefer Halleen shortly after law school.

Today, these attorneys of the next generation are taking a stand for employees from blue-collar workers to high-level executives. Their practice encompasses a wide range of workplace misconduct, championing workers in employment claims involving discrimination, sexual harassment and whistleblower retaliation. Recently, they have seen a significant increase in women at all levels and industries seeking representation for serious sexual harassment, gender discrimination and pregnancy bias violations.

This firm of seven attorneys is small, but mighty, and they are fearless about taking cases that will challenge the law and judicial precedent, bringing our system of justice into alignment with America’s rising social consciousness. During this era of increasing social activism, with groundbreaking movements like #MeToo and March for Our Lives, they are proud to be fighting on the side of social justice.

“Younger folks are speaking up, especially with sexual harassment,” Sharp says. “They have the attitude, ‘I’m not going to be in this environment and stay quiet while you take advantage of me.’ I feel like we’re carrying the torch from past generations at a significant moment in time. We are proud to be bringing cases under the same landmark civil rights statutes that help define this country, like the Civil Rights Act and the Americans with Disabilities Act. I feel we’re responsible to use those laws for the challenges of today.”

“I think there is an awakening as to what social justice is,” Christian says. “We’re seeing more calls to our firm from women and men who have sort of re-thought what has happened to them and are beginning to believe it is illegal. They’re asking what can be done. Judicial interpretation of the civil rights laws in Minnesota and in the country has resulted in extremely narrow definitions of basic workplace rights and protections that are inconsistent with the values of real people today. The #MeToo movement is evidence of this. The law needs to change to reflect these values, especially with regard to what constitutes sexual harassment. As employee rights attorneys, we need to use this watershed moment to challenge past precedent in light of today’s social values. More victims deserve justice.”

The firm’s co-owner and COO Toni Halleen, conveys, “As zealous advocates, we’re willing to take those cases and fight them, whether that means testing them in court or pressing amendments to current laws. We’re challenging the law every chance we get, and we want employers to get the message that they will be challenged. That’s the way we will effect change.”

These attorneys may be bold reformers, but whether they are negotiating settlement outside the courtroom or taking a matter to trial, they regard all parties as “whole people,” and they seek a dispute process characterized by respect and amicability.

“I come from a family of business owners,” Christian says, “so I understand the challenges employers face. That perspective is fundamental to how I prosecute my clients’ legal claims against employers – and it’s consistent with our firm’s approach. We don’t see this as a good against evil kind of fight. We don’t demonize the other side or make things personal with opposing counsel. We’re often serving our clients’ interests best when we act as problem-solvers instead of flame-throwers.”

Sharp adds, “Our firm has made the choice to be aggressive advocates, but not adversarial. Calling another attorney and yelling at them is rarely productive. If we can work together to find a solution, our clients benefit. There may be an accommodation the employer, and even the employee, may not have thought through that will allow our client to keep their job and return to work without hostility.”

As we are becoming a more inclusive America, the attorneys at Schaefer Halleen are proud to be carrying the banners for change.

“What we do daily is help people stand up against illegal behavior in the workplace and fight for the respect they deserve,” Halleen adds. “This is an exciting time to be a social justice law firm.”