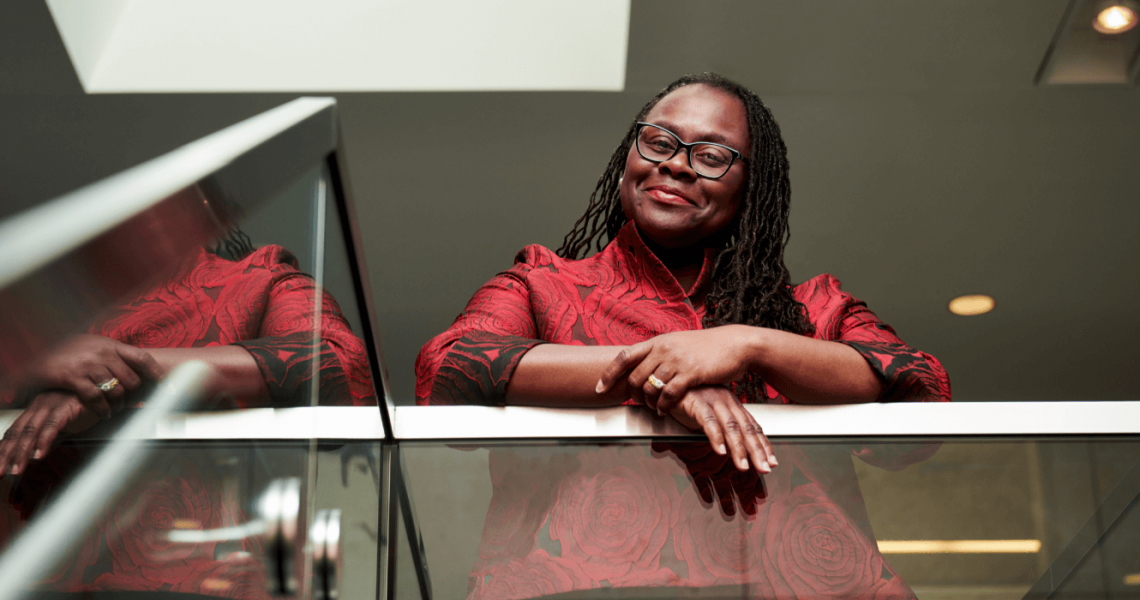 Attorney at Law Magazine recently spoke with Dean Angela Onwuachi-Willig of Boston University School of Law to talk about her career in academia, her writing career and to get her thoughts on various subjects.

AALM: Please give our readers a brief overview of your legal career.

AOW: I graduated from the University of Michigan Law School. After law school, I clerked for two federal judges in Ohio: the Honorable Solomon Oliver, Jr, U.S. District Judge, Northern District of Ohio, and the Honorable Karen Nelson Moore, U.S. Circuit Judge, Sixth Circuit Court of Appeals.  I also practiced law at two large firms: Jones Day and Foley Hoag. Thereafter, I accepted a tenure-track faculty position at the University of California, Davis School of Law, Martin Luther King, Jr. Hall. After three years at UC Davis, we left Davis for Iowa. My husband accepted a tenure-track position at Grinnell College, where we both went to school, and I accepted a tenure-track position at the University of Iowa College of Law. At Iowa, I became the Charles and Marion Kierscht Professor of Law. I served on that faculty for 10 years, sought a couple of judgeships (announced as finalist for Supreme Court of Iowa and interviewed as finalist for Eighth Circuit opening), and returned to graduate school to obtain my Ph.D. Eventually, I left Iowa to become the Chancellor’s Professor of Law at the University of California, Berkeley School of Law; I earned my Ph.D. in Sociology and African American Studies from Yale University while on that faculty. I left Berkeley to become Dean of Boston University School of Law (BU Law) on August 15, 2018.

AALM: What drew you to academia?

AOW: A pipeline program at my undergraduate college, Grinnell, drew me to academia. I never would have dreamed of becoming a professor, but one of my Grinnell professors (in English) suggested that I apply for a grant to conduct summer research for an Associate Colleges of the Midwest (ACM) program that was designed to encourage people of color to become academics. Luckily, I was accepted, and I found the program to be rewarding. Although I really enjoyed conducting research and writing scholarship, I decided to attend law school instead of graduate school. One of the ACM professor mentors for another Grinnell student in the program said to me, “Well, if you like research, you should think about becoming a law professor.” Both the program and her encouraging words stand as an important reminder of how critical pipeline programs are to diversifying different professions. Without that ACM experience and the professor’s words, I never would have become a law professor.

Both the program and her encouraging words stand as an important reminder of how critical pipeline programs are to diversifying different professions.

AOW: A key lesson I learned from Dean Kevin Johnson (UC Davis) has now become famous through the song, “The Room Where It Happens” from Hamilton. He taught me that most decisions have already been made before anyone walks into the room to actually vote on an issue and that key conversations usually occur either through one-on-one discussions or in small group conversations. Essentially, the room where it happens usually means a bunch of small room conversations and agreements.

AOW: My mother always stressed the importance of education, defined broadly. “Nobody can take knowledge away from you.” My mother always taught us that education was important for understanding the world around us and that understanding that world would be key to our navigating our way through the world, particularly as black people. She also stressed how critical education was to upward mobility and, as an immigrant, she gifted me with a perspective that “free” public education was not a luxury afforded many people in other countries, including her own home country. Of course, now, the disparities between different school systems are even wider than they were when I was a child, but that perspective was important for me to have when I was growing up.

AALM: You often speak on the subject of discrimination and inequality for both women and minorities in general. What is your take on the status right now for these professionals within the legal community?

AOW: It is great to see a growing number of professionals of color and women professionals in leadership roles, particularly in law schools. For example, the growing number of deans of color, especially women of color deans, is a sign of progress. At the same time, this growing number is too frequently highlighted as proof of greater progress than we actually see in our society. The overuse of leaders of color as symbols of not-yet-seen advancement places such leaders in a difficult position. Few pay attention to the structural dimensions that make real change, even in the spaces where we are leading, difficult. Also, what often goes unacknowledged are the differences, subtle and obvious, between the experiences of leaders of color and those of our peers in the majority or “insider” group.

Few pay attention to the structural dimensions that make real change, even in the spaces where we are leading, difficult.

AALM: You are a prolific and celebrated writer. What prompted you to write “According to Our Hearts: Rhinelander v. Rhinelander and the Law of the Multiracial Family” and what’s the significance of that message in your life?

AOW: I was motivated both by personal story and the victory that Alice Rhinelander, a black (biracial) chambermaid, obtained in her annulment trial against her husband, Leonard Rhinelander, a wealthy white, descendant of the Huguenot family. I am a black woman married to a white man. Often, people will highlight stories, movies, TV shows, and other items that involve interracial couples to me, though they do it less so these days than before. One of those stories was the story of Alice Rhinelander, who was sued by her husband for an annulment on the grounds of racial fraud in the 1920s. He claimed that she lied to him about her race/misrepresented her race.

AALM: You are an acknowledged expert in critical race theory, employment discrimination, and family law. Could you speak to the origins of these passions, and what you feel you’ve done to make inroads?

AOW: My life is the origin of my passions. I am the daughter of Nigerian immigrants who came to the United States during the Biafran War.  I grew up in a low-income household and was raised by a single mother in the South. I attended a racially, ethnically, and socioeconomically diverse high school that had race “riots.” I grew up in Houston, a city with no zoning law where white flight occurred later than it did in other cities. I grew up in a world where I was constantly grappling with race and racism from as far back as I can remember—four years old. To find my way to where I am now, I had to not only engage in the process of learning myself but also understanding how others see and perceive me and to know how to respond to all of those things. I had to be able to understand how context can shift meanings and the dynamics in different spaces and at different times. Employment discrimination involves those same questions, only in the workplace.

I discovered family law in law school. Then, I was mostly interested in issues around same-sex marriage. I have a lot of friends who did not have the right to marry at that time, and the denial of that right deprived them and their families of real benefits and opportunities. As a woman, I was also interested in how family law constructed gender and gender roles in families and in the inequities the divorce process that tend to leave women far worse off than their former husbands after divorce.

AOW: My family. My husband is my college sweetheart. We’ve been married for 24 years.  We’ve been together for 29 years.  We have three, amazing beautiful children—two in college and one in sixth grade. They keep me grounded. They keep me laughing, and they keep me sane.

Becoming Dean of BU Law is another proud accomplishment. And, being the first person of color to serve in this role has been important to me.  Being in this role has shown me the importance of embodied diversity. I am always taken aback by how much it means to people in our community of all races. Also, it has shown how important it is to have someone with different perspectives and outlooks in this role. One of the issues I have long noticed with law schools is that the faculty and leaders tend to be people for whom law school (and other parts of our world) have largely worked. There is not as much of an outsider perspective as one would like in an educational part of the world designed to promote and ensure justice. It results in so many ways in our simply reproducing ourselves, along with all of our blind spots.

There is not as much of an outsider perspective as one would like in an educational part of the world designed to promote and ensure justice.

AALM: Tell us about the Lutie A. Lytle Black Women Law Faculty Workshop.

AOW: I founded the Lutie A. Lytle Black Women Law Faculty Workshop in 2007 (named for the first female, and first black female, law professor in the United States and, as research suggests, the world). It has had great staying power, and it has evolved to encompass more women and has evolved with changes in the legal academy and the media. The Lytle Workshop affords black female law faculty an unparalleled opportunity to prepare for the job market; develop teaching and leadership skills; hone scholarly agendas; workshop articles, book proposals, and “ideas-in-progress;” and prepare for decanal and other leadership positions in higher education. As of September 30, 2019, Lytle Workshop participants have published more than 1,060 articles, 115 book chapters, and 38 books since its founding. The Lytle Workshop has also helped to produce 12 law deans, 1 provost, and numerous associate deans.

AALM: Who is the Angela who lets down her hair and cuts loose?

AOW: I am a huge “Survivor” fan. I like watching other reality competition shows like “The Challenge.” It’s fascinating to watch these shows.  Who builds alliances? Who finds themselves in the inner circle and how? There are gendered and raced components to it all, and it’s super interesting to watch. My oldest son recently introduced me to “The Circle,” and similar dynamics are at play.

I would say the Angela who lets her hair down is much less of an academic.  That Angela appreciates popular culture much more than most academics.