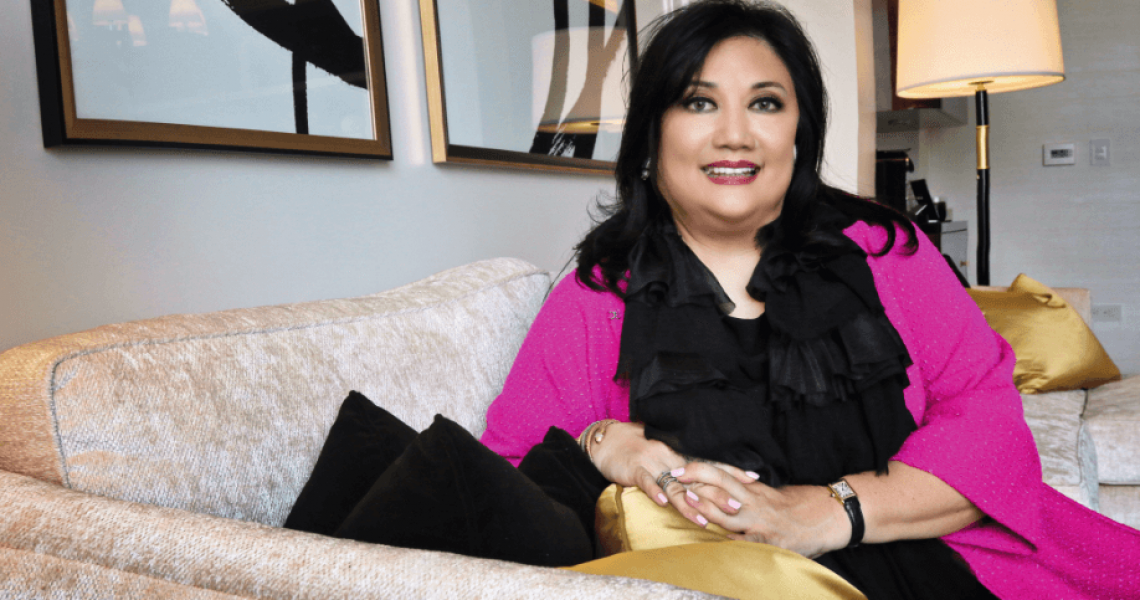 Deborah S. Chang: The Tiger Within — Winning the Chang Way

When Sun Tzu wrote, “know yourself, know your enemy, and you shall win a hundred battles without loss,” he was admittedly referring to strategies of war. Yet, as every trial attorney can attest — sans physical confrontation, gunfire, or the chance of mortal injury — battling it out in the courtroom is not unlike entering a war zone. And though Tzu’s words have been paraphrased countless times in myriad contexts over the centuries, it doesn’t detract from their wisdom or truth.

Unfortunately, as it is with so many famous idioms, few people know or bother to discover the full context of this particular quote. Tzu goes on to suggest that observation and self-education are the best ways to “know thy enemy.” Yes, he also touts the efficiency of utilizing spies, but our judicial system frowns on that particular approach.

It’s not hyperbole to suggest that our Attorney of the Month, Deborah S. Chang of Panish Shea & Boyle LLP, has mastered the art of “knowing thy enemy.” Over the course of her nearly 30-year career, Chang has sat on both sides of the aisle, representing both plaintiffs and defendants throughout the country in products liability, personal injury, wrongful death, commercial litigation, professional liability, securities fraud and complex tort cases.

Furthermore, she consistently augments this dual perspective with rigorous and exhaustive research and preparation.

“When I first began practicing law, there were far fewer women attorneys — especially in products liability cases. I often found myself to be the only woman in a room at a deposition, meeting, hearing or inspection,” she says. “But I used being a woman to my advantage. Many times, my male counterparts thought I would have no understanding of the science or engineering involved in the product and would be genuinely surprised when it turned out that I knew as much, if not more, than them.”

But her research is not limited to the intricacies of the case at hand. As part of her trial preparation, Chang is extensively involved in jury research and focus groups. In 2000, she helped conceptualize and launch one of the first companies to provide online focus groups from a unique database of millions of internet users. It was used by trial attorneys and major insurance companies in prominent cases pending throughout the country, and was recognized by the National Law Journal as “a helpful tool for assessing the strength and value of cases.”

She credits one of her law professors and mentor for helping to develop both her skill set and passion for the law. “I was fortunate to have as my trial advocacy teacher one of the greatest trial lawyers on the planet, Mark Bennett. He is now a very well-respected federal district court judge who was appointed to the bench by President Clinton,” says Chang. “When he was a young trial lawyer, he had almost every record verdict and had argued cases in the United States Supreme Court, and was universally viewed as one of the best legal minds around. He was great in the courtroom — and was a great writer. Basically, he led by example and convinced me that a well-prepared creative trial lawyer can accomplish anything. He had such a strong sense of achieving justice and doing the right thing … it was truly inspirational.”

Chang’s decision to cross over to the plaintiff’s side was inevitable because she began seeking justice for the oppressed early in her career. Most young attorneys embark on their careers with the hope that someday, after years of hard work and experience, they might be fortunate enough to have the opportunity to be involved in a case that will be hailed historic or landmark.

For Chang, that watershed case came impossibly early. Graduating with honors from Drake Law School, she was quickly snapped up by one of the largest law firms in New England after clerking for the chief judge of the Connecticut Appellate Court. Located in the heart of big insurance country in Hartford, Connecticut, it did not surprise her to discover much of her work involved representing various insurance companies. It was here that she found another incredible mentor who would give her the opportunity of a lifetime.

“It was a wonderful place to practice, and I loved the work,” she says. “And when I was a first-year lawyer, I became an instructor for the moot court program at the University of Connecticut Law School for now Judge Michael R. Sheldon, who was then the director of the Criminal Clinic and the interterm moot court program. One day, he called me into his office and said, because I was with this prestigious law firm he wanted me to go see one of his clients who was a prisoner at a maximum-security prison for an ineffective assistance of counsel claim.

“Then, the last thing he said really shocked me,” she continues. “He said, ‘By the way, he has AIDS.’”

Keeping in mind this was the latter part of the 1980s when AIDS was still a relatively new term, shrouded in fear and mystery, Chang’s shock was understandable. She recalls driving to the maximum-security facility fairly shaking with trepidation. Her reception did nothing to ease her angst.

“They had the AIDS prisoners segregated and as we approached that area they shouted out loudly, ‘AIDS! AIDS!’,” she recalls now in horror. “Everyone was getting out protective gloves and covering themselves almost like HAZMAT gear.”

“The first thing he said to me was, ‘I’m not going to live long enough to ever get out of jail, and I want you to drop the ineffective assistance of counsel claim. Instead, I want you to bring a class action on behalf of prisoners with AIDS.’ My jaw dropped. I wanted to reassure him, but let’s face it, I was a baby lawyer and I’m sure he could see that I was quaking in my shoes. And that hurts me to this day because he had done so much research and here he was trying to fight that stigma and his own lawyer was scared of his disease.”

Chang’s fear turned to anger as he related exactly how he and fellow AIDS inmates were treated. Segregated from the general population in a room that became known as “Ward 9,” they had no access to recreation; no access to the library; they couldn’t hold a job, which means no opportunity to earn credits toward early release nor earn money; they were not allowed to eat in the cafeteria; and they had no access to the laundry. Chang went on to learn that convicted prisoners were not the only ones relegated to this section; anyone in the criminal system diagnosed with HIV or AIDS — convicted or not — was sent to this section. One of the Ward 9 inmates was barely 19 and had been arrested for stealing a radio and would never see his trial date.

Fired up, Chang returned to her offices and approached the head of the trial department about initiating the class action. His response was swift and negative, citing time and manpower limitations.

“I just couldn’t take no for an answer,” Chang says. “There was just something about this quiet, dignified man who wasn’t asking for anything for himself, but for his fellow prisoners and those who would undoubtedly come after.”

Chang shared her story with friends at the firm, and they suggested she approach one of the partners, Allen B. Taylor, who had clerked for Justice Thurgood Marshall.

“He was very sympathetic and appealed to the executive committee, and the committee basically overruled the trial head,” she says, “and they gave us their blessing.”

Her trips to the maximum-security prison became so frequent, Chang says, “They set me up my own little office on the floor and I joked that it was almost like one of our branch offices.”

Although no longer fearful to enter the facility, the trips became increasingly agonizing as she watched her clients deteriorate and suffer.

“One of the patients with crytococcal meningitis would be shrieking in pain,” she says, “but those medical professionals who were on staff told me they had nothing that would help. They did not have access to the proper drugs or medical equipment necessary. By being there so often, the staff befriended and trusted me, and they gave the most powerful deposition testimony that established that segregation of these prisoners was a bad idea and that they were in dire need of training, medical experts, additional trained staff, and effective AIDS medication and therapies. In fact, when it came time for important hearings, I had to go whisper to them to sit with the state attorneys on their side because they immediately would come sit behind me.”

Ultimately, Joe Mack passed away before he could see this “newbie” attorney keep her promise and make history doing it. The class action resulted in a landmark settlement that was cited with approval by the 1991 Report to the President and Senate by the National Commission on AIDS, and resulted in the formation of model policies and procedures relating to the housing, programming and medical treatment of prisoners with AIDS currently used in prisons throughout the country. Chang thereafter drafted and lobbied for enacted legislation in Connecticut relating to the release of terminally ill prisoners on medical parole, and she proposed and instituted the first national scholarship fund with the Stewart B. McKinney Foundation for individuals pursuing a medical or nursing degree to work with patients with AIDS. In fact, the first recipient of the scholarship was one of the medics on the defunct Ward 9

A Legacy of Amazing Litigation

But of course, that was just the beginning of a career that is resplendent with numerous milestones. In 1996, while a partner with another large defense firm, she brought the first lawsuit in the country based on the newly enacted Violence Against Women Act of 1994. Chang successfully argued for the upholding of the constitutionality of the statue in the first federal court to consider the issue. Following the successful settlement of the case, she lectured extensively on the issue of gender-motivated violence. Appearing on national TV as a guest commentator, both before and after the U.S. Supreme Court eventually ruled that the civil remedy portion was unconstitutional. Always true to her beliefs, Chang always fights the good fight, all the while maintaining a highly successful practice.

Being on the plaintiff’s side at Panish Shea & Boyle has now enabled Chang to do the type of work she was destined for on an everyday basis.

“Now I’m not limited to a landmark once-in-a-blue-moon case to truly make a difference. With every case or trial or settlement, we have the ability to literally change and improve people’s lives,” she says. “We give a voice to people who are otherwise unable to be heard.”

Of course, not every time up at bat is a homerun, but Chang is philosophical about that, too. “Brian Panish gave me the best advice I ever had after I lost my last case I ever tried as a defense lawyer. He said, ‘If you can’t lose a case with the same grace as when you win, then don’t call yourself a real trial lawyer. If you try enough cases, you are going to win and lose.’”