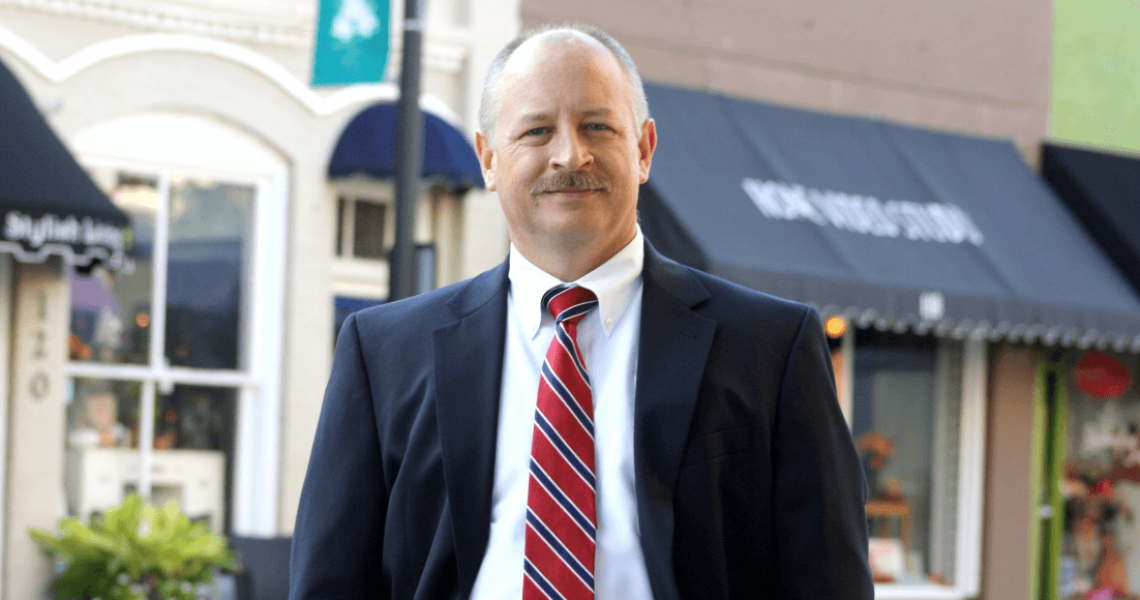 “Filing for bankruptcy is a lot like stock car racing,” said Cary bankruptcy attorney, Dennis Jay Sargent, Jr. who knows something about both subjects. “In bankruptcy, you need people to help you get through the process. In racing it’s a team effort; you can’t do it alone.”

Sargent, 49, was raised in Elmira, New York where several generations of men in his family had been truck drivers and mechanics. He was the first member of his family to go to college. “I come from a bluecollar family and I was the first to wear a white collar,” he said.

Many of Sargent’s clients are lower to middle income wage earners. “I feel like I have a connection with these people because that’s how I grew up. They’re trying to give their families what they need and what they want and it doesn’t always work out that way.” Medical emergencies, marital issues, children and job loss are all events that can land people at his doorstep according to Sargent.

Sargent’s mother was a legal secretary for 42 years for D. Bruce “Pete” Crew, an attorney who became DA and then a judge. Sargent says Crew was a big influence.

“I looked up to him. He had an aura of authority. He wore a suit every day, people respected him and liked him.” Sargent added that he was fascinated by the photos of crime scenes in Crew’s office and as a young child was delighted when Crew let him play in the courtroom and sit in the judge’s chair and bang the gavel.

After high school, Sargent joined the Army where he spent four years on active duty and another two years on activereserve. During six months of his hitch, he was stationed in the Sinai Peninsula’s demilitarized zone between Egypt and Israel as part of the multinational peacekeeping force provided by the 1978 Camp David Peace Accords. “The Egyptians and the Israelis both appreciated the force’s presence because it provided a sense of peace in the region and ended years of conflict,” Sargent said.

The time spent in the Army helped Sargent pay for his bachelor’s degree from Elmira College then a law degree from Widener University School of Law in Delaware. He joined a medium sized law firm in Delaware then moved to Raleigh with his wife, Dana, where he managed the contract and title department for a cell tower leasing company. When the company relocated out of state, Sargent was laid off.

Sargent decided to strike out on his own and purchased a marketing fulfillment franchise. But the franchisor stumbled and Sargent wound up closing the business and filing for personal bankruptcy in 2008. “It was an eye-opening experience. Bankruptcy protected my retirement and my family and we learned how to live without credit cards and we still do,” Sargent said.

Returning to the law in 2010, “I thought opening a bankruptcy practice would be perfect for me because I like numbers and I like helping people and I had firsthand knowledge of the process and stresses,” said Sargent. He focuses on consumer Chapter 7 and 13 bankruptcies.

“If a client is struggling with a decision as to whether they should file, then sometimes I’ll share my experience so they understand that bankruptcy is not a death sentence,” Sargent said. “You can bounce back from it and get that fresh start the law envisions.”

“People want so badly to be successful that they sacrifice everything and they still sometimes fail,” said Sargent of some of his small business clients. “I can empathize with them because I have been there and I understand the phone calls from the landlord and the vendors.”

Sargent does not recommend bankruptcy to all his clients. He helps them look for other solutions. “Every case is unique. Bankruptcy is a last resort,” said Sargent. “Many of my clients have told me afterward how much better they felt, that they didn’t have that stress anymore, that they could refocus themselves on their life and family as opposed to worrying about how to pay the next bill or whether they should answer the phone.”

“Caring, compassion and relief are the cornerstones of my practice,” said Sargent. He has chosen to remain a solo practitioner to protect the one-to-one relationship with his clients. “Every client talks to me and that is by design.”

Dennis Sargent races what he describes as a, “limited late-model, purpose built stock car. It’s a big cage with a skin on it.”

The Sargents have been stock car racers for generations, Dennis III, age 16, is now the fourth generation to race in the Friday and Saturdays night specials. Held at local, short tracks, Sargent said, “It’s a team effort. I love the camaraderie.” His team includes friends and family. Fourteen-year-old daughter, Alexandra and wife, Dana, are stock car racing fans. Dana and Alexandra have been known to be a members of the pit crew.

“It’s not that fast, but you get the feeling that it’s very fast because it’s tight. You’re running door to door with somebody and you’re making quick turns around a corner and you hope the car wants to go that way,” said Sargent. “It’s the adrenaline of racing and the feeling at the end of the night when you had a nice run and you finished well.”

Sargent sends clients an email every four months after their discharge from bankruptcy. “I try to help them stay on the right track and do things to make sure they are successful after bankruptcy and make a positive change in their life,” said Sargent, “I tell my clients, look, I want you to be successful. I hope I never see you again.”