Doug Howard: On the Rules of Improv 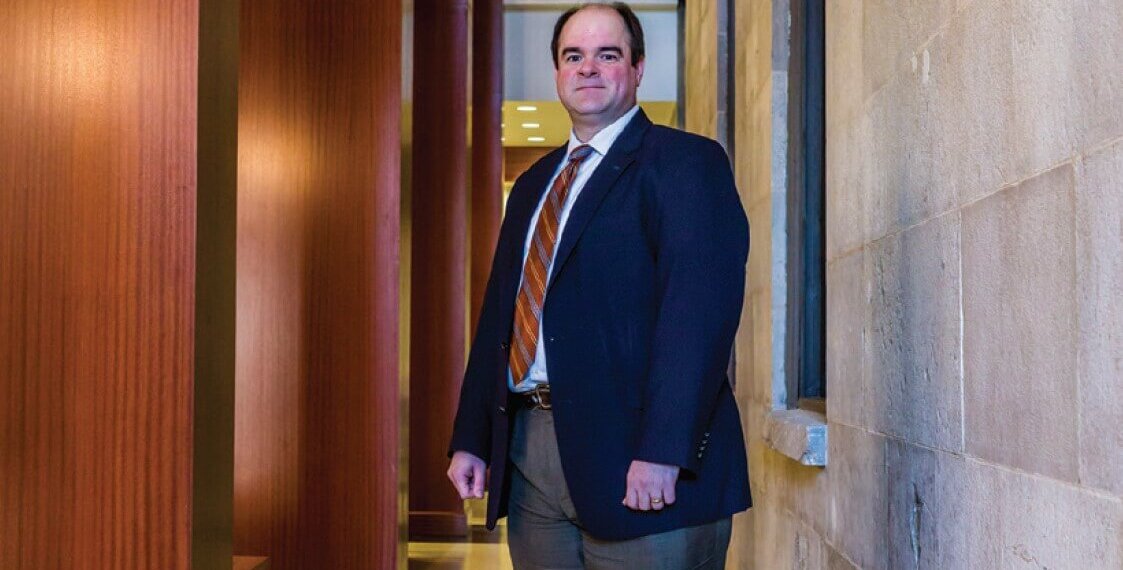 “Our competitive edge is the way we interact with our clients. I know everybody says that, but we really are approachable and we respond quickly to client needs,”says Doug Howard, founder of Frankfort-based Howard Law Group, P.L.L.C.

“One of the biggest problems in the legal field is clients never being able to reach their attorneys. Before I started practicing, I told myself, ‘That will never be me,’ but I quickly realized how much time just a simple phone call takes. One call breaks your concentration and you have to struggle to get back into the groove. That’s why I set aside a block of time every morning and every afternoon just to make phone calls,” he says.

The firm’s practice areas are family law, bankruptcy, and business law. Howard’s team includes a paralegal and a legal assistant who serve 12 counties in central Kentucky. Howard plans to take his services statewide in the near future.

Divorce cases are a substantial part of the firm’s family law practice and Howard has developed a low cost, quick and easy divorce package to help families through the multiple challenges of the proceedings.

The package will also benefit the court system, he says. “We’re serving the public, but we’re also serving the court side of it. The clerks get a lot people who can’t afford traditional legal services bombarding them with questions or filing half-filled in forms, or forms that aren’t correct because they found them online. We try to get them through the system as fast as we can for a low cost and with as little stress as possible from the client side, clerk side and judge’s side.

Howard’s interest in the law came at an early age. “If you hear my mother talk about it, it goes back to when I was in second or third grade. One of the first times I recall was in the eighth grade. I shadowed an attorney and had him come to my class. I recall thinking, ‘That’s very interesting. I’d like to do that.’ I liked the aspect of how he framed things, how he worked within the system to help people, how he addressed their legal problems and tried to do it in a compassionate manner, and how he tried to help out those people who needed it as much as he could.”

Early in his career Howard worked on a number of political campaigns. He then joined a small law firm in Franklin County primarily doing work for creditors. Howard traveled extensively through more than 100 of Kentucky’s 120 counties.

“I enjoyed that because I met a lot of people and experienced a wide variety of situations. For example, judges in adjacent counties can do things in vastly different ways in terms of how they run their docket, what they expect of you, and that was always interesting to me. I saw parts of the state I would not otherwise have gotten to see,” he says.

The idea of starting his own firm had been in the back of his mind for several years and then during the 2008-2009 recession, the firm he worked for closed its central Kentucky office. “I had contemplated opening an office for several years, but the sudden change was a result of the downturn and the recession. About a month later, I hung out my shingle. That was June 16, 2009,” he says.

Being an attorney and a manager is challenging and it is serious business, but Howard has discovered and used the techniques of improvisational comedy to improve his performance, increase his communications skills, and boost his confidence. “Last summer, I wrote a seminar on the rules of improv comedy and how to use them in business. I’ve only given a few of those seminars, but it’s a fascinating process to see how people learn about improv and how to use it in business. It also helps me because in court you have to use those skills in talking before a judge and a jury. It’s definitely helped me be more comfortable in front of a crowd. Those skills have helped out a lot,” he says.

Howard earned a B.A. in History from the University of Notre Dame, graduating in 1995. He earned his Juris Doctor from Catholic University of America School of Law in 1998.

He and his wife of 11 years have two children ages ten and six. Howard volunteers with the Cub Scouts and Boy Scouts. He serves on the board of Downtown Frankfort, Inc., the board of Frankfort/Franklin County Community Education, is active in his church, and served a term on the Frankfort City Commission 2007-2008.