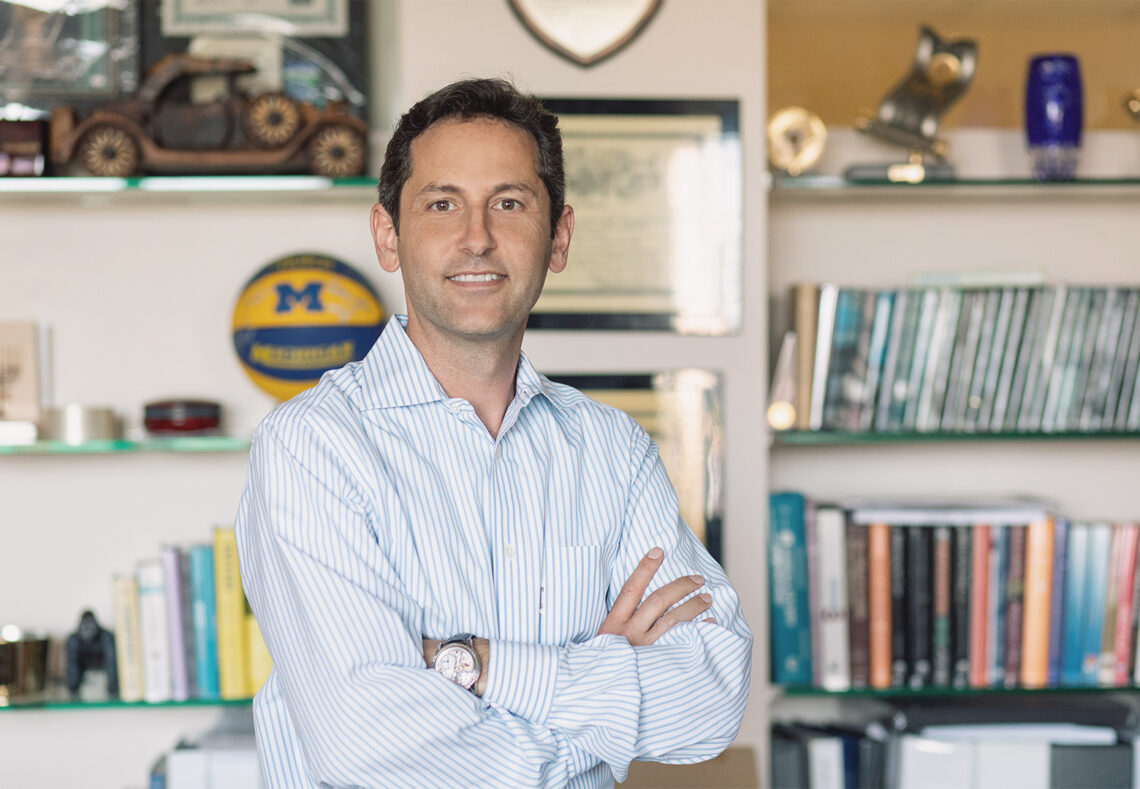 “Someone once told me, winning isn’t everything … it’s the only thing. That’s how I’ve lived my entire life,” says Bradley I. Kramer, M.D., Esq., a Beverly Hills lawyer and medical doctor whose law practice focuses primarily on litigating complex medical malpractice cases. “The flipside—losing—is just about the absolute worst feeling in the world. I hate it more than anything. In sports, in academics, in law, in life. Doesn’t matter. A loss is a loss. Period. In my world, there are no prizes for second place.”

Dr. Kramer’s philosophy is backed by a lifetime of what some might describe as “over-achieving.” One of only a handful of plaintiff ’s medical malpractice lawyers in the United States who are also medical doctors, Dr. Kramer’s expertise in both law and medicine places him in a unique position to litigate hotly contested malpractice cases, many of which come to him only after being rejected by other lawyers.

And that philosophy has paid dividends. Since 2004, Dr. Kramer has recovered nearly $100 million for his clients, earning him wide recognition in the community and the respect of his colleagues in the process.

A fierce competitor from an early age, Dr. Kramer first took his competitive urges to the tennis court, acing out his competition, ranking as the No. 1 junior player in all of Chicago, No. 12 in the Midwest, and as high as No. 84 in the United States.

High school brought continued success, winning the Illinois High School State Tennis Championship in 1993. He then led the University of Michigan Men’s Tennis Team to a Big Ten Conference championship in 1996, a feat which the team has not since repeated in the ensuing 25 years. Not surprisingly, he was also named an Academic All-American.

Indeed, Dr. Kramer’s academic work was so impressive that he graduated in only three years. “I graduated early with a degree in biology,” Kramer says. “But I wasn’t really sure where I wanted to go next. With my dad being a doctor and my love for science, medical school seemed the most logical path, but even from the get-go of the application process, I had some deep-rooted reservations. Ultimately, I decided that I’d give med school a shot, so I came back home to Chicago and attended the University of Illinois.”

Dr. Kramer says he enjoyed the first two years of medical school, thriving on the academics and learning the “language” of medicine.

“Unfortunately, when I got to my third year, we started doing clinical rotations and that’s when the wheels started to fall off the bus. I just didn’t enjoy my work in the hospitals; it was intense psychologically, and my heart wasn’t in it the way that it needed to be if people’s lives were literally going to be in my hands.”

Nevertheless, he finished school, earning his degree with high honors.

“I had no idea at that point what I wanted to do, but I knew it wasn’t medicine,” he says. “By a stroke of luck, I got word of a one-year internship position at UCLA (the first year of residency training) that had just been vacated by an applicant. As long as I completed that one year, I would be able to apply for my medical license. So that was a no brainer. An M.D. degree without a license was essentially worthless, but with a license, I could actually practice medicine and hold myself out as a licensed physician.”

Dr. Kramer completed the internship program and received his California medical license in 2001, knowing full well that his internship year would be his last in medicine. When he decided to instead try his hand at law school, his first choice was naturally the pinnacle of legal education – Stanford Law School. And with a little bit of luck, he was accepted.

“The summer following my first year at Stanford, I spent at an internationally recognized, white shoe law firm with offices across the globe,” he says. “And I hated it. For the summer between my second and third year of law school, I went in a totally different direction, working at Bonne Bridges, a well-established medical malpractice defense firm with an impeccable reputation for defending doctors. And while I enjoyed it far more than the work I did during my first summer, I soon discovered that it was an insurance defense mill. Granted, they were representing good people who were being accused of very bad things, but at the end of the day, I was working on behalf of insurance companies, which was exactly the opposite of who I wanted to work for, even if I was defending well-intentioned doctors.”

Dr. Kramer ultimately graduated from Stanford in 2004, and much like his peers, went straight to work in what would turn out to be corporate law firm hell.

The first firm he joined focused primarily on real estate, entertainment and corporate law. Not exactly in his wheelhouse. After about a year and a half he tried another Los Angeles firm whose primary practice was healthcare regulatory law. “That was more in line with my education,” he says, “but I was still unfulfilled. So, after a year and a half, I left that firm as well.”

“In nearly five years of practicing law, I had realized that I was basically a glorified pencil pusher for the partners in charge. I rarely met the firms’ clients and I had mediated, tried, or settled a total of zero cases at that point. I just knew there was absolutely no way I could do that for the rest of my life. If I was going to continue in the legal field, I knew I needed to get the out of the white shoe corporate law firm structure and hang my own shingle,” he says. “Obviously, it wasn’t working for me to try to fit in at other people’s firms which didn’t allow me to spread my wings, use my competitive impulses, or select my own cases or clients.”

With his competitive juices free to thrive, and the understanding that at this point he didn’t have any choice but to succeed, Dr. Kramer launched his own firm with a basic, grassroots approach. “I opened my firm in late 2009 and began with absolutely nothing,” Kramer says. “No money, no clients, no leads. I had to start somewhere, so I just started looking for cases on Craigslist and contacted any friend or family member I had ever known. I went to every networking event I could think of and handed out business cards. No person or group of people was too big or too small. Some people were shocked at my unfiltered approach to marketing my firm, but they were also intrigued by my background, and slowly but surely, business started coming in.

“I started getting referrals from other plaintiff ’s attorneys who didn’t handle medical malpractice cases,” he says. “Originally, I would only get one or two calls a week from potential clients that had been referred to me by other lawyers. Over the past decade, that has grown to 15-20 intakes a day. My practice is now predominantly focused on plaintiff’s medical malpractice cases, but I have also successfully handled several multimillion-dollar catastrophic personal injury cases when they’ve come to me.”

“From day one, I have been a ferocious competitor with one singular goal in mind – to win for my clients,” he says. “To maximize the emotional and financial recovery of victims who have been injured through someone else’s fault.

“Over the past decade, I’ve been able to recover somewhere in the vicinity of $100 million for my clients,” he continues. “Many of those cases came to my office after being rejected by multiple firms, including one that was settled for over $3 million.”

Dr. Kramer doesn’t hide his astonishment as he describes how medical errors are the third leading cause of death in the United States after heart disease and cancer. “You have an unconscionable number of people who are either seriously injured or killed as the result of medical mistakes,” says Dr. Kramer. “And yet, because the California legal framework is what it is, and with the limitations imposed by California’s MICRA law, you have very few attorneys who are willing to take these cases, especially complex ones.”

“I see people at some of the worst moments in their entire lives. When I’m able to advocate for these people and recover significant compensation for them, my heart feels full. And by holding health care providers accountable, I feel that I’m making the practice of medicine safer for everyone, which is a fundamentally good thing for any community.”

As Dr. Kramer shows me the countless emotional and heartfelt thank you notes, cards and letters he’s received from past clients, it’s clear just how much Kramer’s efforts have impacted the lives of his clients. “There’s absolutely nothing that makes me feel better than knowing that I was able to take someone in an awful and desperate situation and, against all odds, after sometimes having been turned away over and over again by other lawyers, put them at ease, both emotionally and financially,” he says. “That type of winning, not for me, but for people who don’t have the resources or experience to help themselves, is the best type of win I can imagine.”