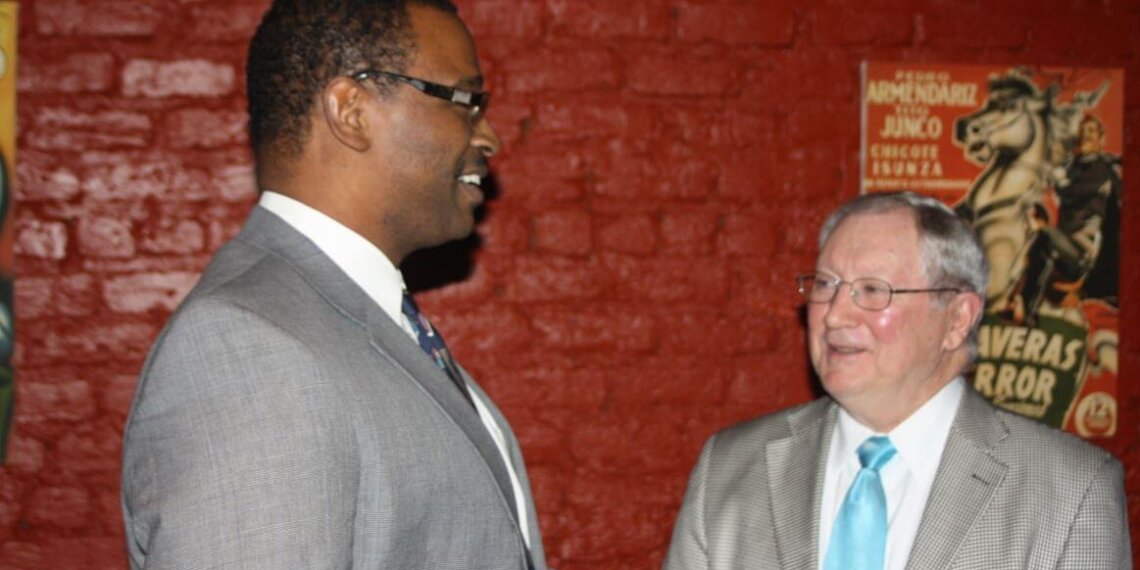 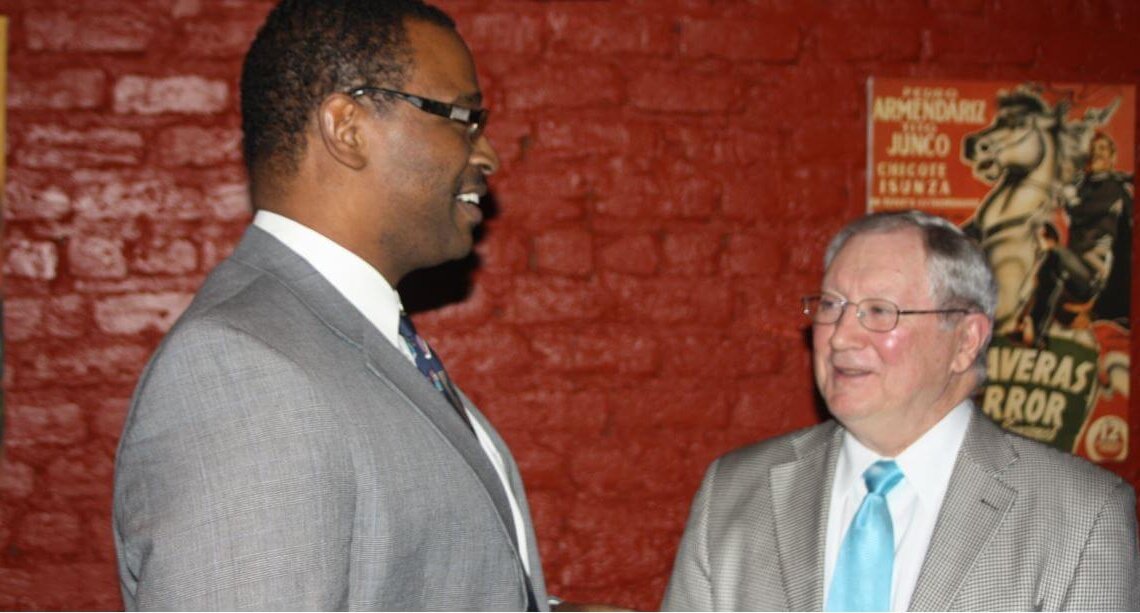 Emily Pappas gripped the podium nervously and glanced up at the bench. She shuffled her notes for her opening argument and took a deep breath.

“Just relax and enjoy yourself,” urged Raleigh attorney E.D. Gaskins, Jr. in the moot courtroom at Campbell School of Law where he was mentoring Pappas, a 3L.

Gaskins is an outspoken advocate for mentoring. “One reason I continue to practice is because I have such fine lawyers to work with both in the firm, those who come in during the summer and the Campbell externs we have working pro bono activities.” He is heavily involved with Connections, a mentoring program between Campbell School of Law and the 10th Judicial District and WCBA for law students and young lawyers.

There has been a sea change in the legal industry in North Carolina; there are more law graduates than jobs. As a result, graduates are opening their own practices and facing a lot of competition. Mentoring has been a casualty of the times. “Some attorneys just don’t do it; apparently they feel no obligation to help younger lawyers. Others do not give it a high priority, particularly when they are under significant pressure to produce billable hours and significant income,” wrote Gaskins in a 2005 paper for Wake Forest School of Law.

“Mentoring is not only teaching young lawyers the skills they need to be effective lawyers but how to act like a lawyer. How a lawyer goes about his or her craft. What’s your attitude and how do you deal with other lawyers, judges and clients,” said Gaskins. “I can’t imagine starting the practice of law without having experienced lawyers to interact with virtually every day.”

Gaskins is a co-founder of Everett Gaskins Hancock where his practice is primarily business litigation. He calls it business problem solving. Companies are now far more willing to reach a settlement through mediation, according to Gaskins. “A lot of it is bringing commonsense and reasonableness into a dispute where sometimes people’s feelings have been hurt or they feel threatened. You have to talk them down and get them to think about the best solution for both parties. What’s the common ground?”

It’s a lesson he conveys to law students who are invited to sit in on client meetings. “Law schools teach the law. Mentors teach you to use the law when dealing with real people,” said Gaskins. He also imparts to them the value of collegiality and professionalism.

When Gaskins began practicing in the late ’60s, there were just over 200 lawyers in Wake County. Many of them had lunch every day at a cafeteria next to the courthouse. “It was a very collegial atmosphere. I can’t tell you how many matters got solved over lunch.”

Today, there are over 5,000 attorneys in Wake County. “The local bar is a small county bar in a large county and there is a premium on professionalism that is a carry- over from those early years of the bar.”

Gaskins promotes the same principals at meetings of the Craven-Everett American Inn of Court. He is a founding master and past president.

“We are a learned profession and our primary purpose is to serve the public, not to make money. We are members of this profession with a common goal and purpose so it only makes sense to treat each other with great respect and dignity and understand that common purpose.”

Gaskin’s commitment to professionalism was recognized in 2004 when the WCBA presented him with its Joseph Branch Professionalism Award.

“YOU OUGHT TO BE A LAWYER” E.D. “Ed” Gaskins, Jr. grew up in New Bern and Monroe, North Carolina. His mother, Arleigh, was a stay-at-home mom. His father, Ed, was a banker at American Bank & Trust Company (later United Carolina BancShares) in Monroe. His younger brother, Greg, is also an attorney.

One of the bank’s customers was prominent local attorney Henry Hall Wilson, who went on to be the liaison to the House of Representatives for the Kennedy and Johnson administrations.

While visiting the bank one afternoon, Wilson spotted Gaskins laboring over his high school biology homework. “Ed, you ought to be a lawyer,” said Wilson, “because as a lawyer you don’t have to memorize anything, you just need to know where to look it up.”

“I think I’d kind of like that,” responded Gaskins.

Coming from a long line of Baptist preachers, his grandmother hoped he would heed the calling of the church. “But I didn’t get that call. I had to tell my grandmother that the call that I got was to serve my fellow man in the practice of law.” Gaskins heard at least part of the call as he has taught Sunday school for 40 years. He tries to put into practice what he teaches. “That’s really tough sometimes. But folks pay more attention to what you do than what you say.”

He earned a bachelor’s degree in English at Wake Forest University and remains fiercely loyal to the men’s basketball team. A season ticket holder for 50 years, he was excited to pose for a photo with head coach Danny Manning and assistant coach Randolph Childress for this story.

Army ROTC kept him out of the military while he was getting his undergraduate degree and a law degree from Duke, then he passed the North Carolina Bar.

LESSON FROM VIETNAM Jan. 30, 1968. The Vietnamese New Year T?t holiday. Gaskins was stationed in Saigon when Viet Cong and North Vietnamese People’s Army of Vietnam forces swarmed into South Vietnam in one of the fiercest battles of the 20-year war. Eighty thousand North Vietnamese and Viet Cong troops struck more than 100 towns and cities in the south including Saigon. “It was a battle zone,” recalled Gaskins.

An Army captain, he was assigned to lead a team of 100 conducting interrogations of villagers and soldiers in South Vietnam. He worked in Saigon and at the Marine base at Dong Ha on the border between North and South Vietnam.

Unlike the renditions and harsh torture of Middle East terrorists in recent years, Gaskins took a very different approach to interrogations. “You should get to know your subject to the extent that you can develop a rapport with them,” Gaskins said. “If you use force, you’re going to get information; it’s just not very reliable.”

“We frequently used the good cop/bad cop,” he said. If an enlisted man handling an interrogation was being stonewalled by the target Gaskins would be called in. “I’d walk in and the subject would see that I’m an officer. I’d go into a tirade in English. The subject would not know what I was saying. Then I’d leave and the enlisted man would say, ‘That’s Captain Gaskins, he’s the meanest son of a gun in the Army and he said that if I don’t get any good information from you, we are both going to be in trouble. That puts the two of them on the same psychological plain and it’s very effective.”

Returning home, Gaskins found some of those interrogation techniques worked in Wake County courts. “If you establish rapport, you generally get a better response than if you are intimidating, threatening or unpleasant. Interrogation techniques are exactly the same as one would use in interviewing a witness or conducting a deposition.” It’s a skill he still teaches to law students he is mentoring.

Gaskins also credits his Army experience for teaching him to be fearless in the courtroom. “When I came back from Vietnam, a lot of people would say, oh judge so-and so-is really tough and I’d just smile because I was thinking, it ain’t nearly as tough as people shooting at you,” he said.

Gaskins has been married to his wife, Ann, for 50 years. She has worked with him in his firm for the last 25 years. They have two daughters, Natalie Sherman, who lives with her husband, Brent, and three children in Chicago; and Meredith Bell whose husband Robert, is also a Raleigh attorney. They also have three children. “I love practicing law; but, when I’m not, I like to spend time with the grandchildren and with Ann at our beach house.”