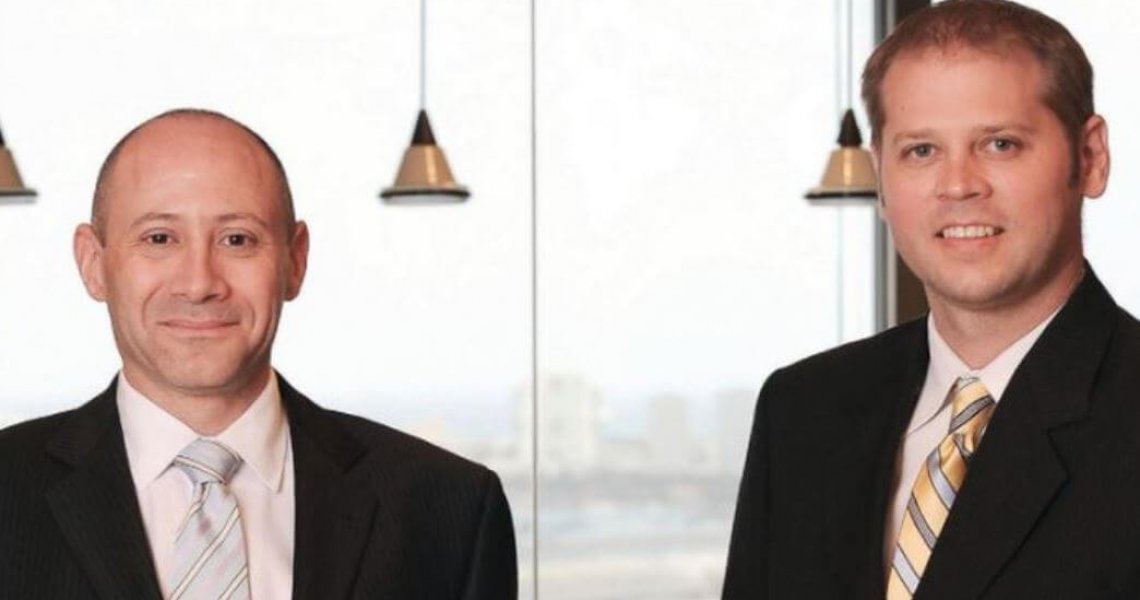 Eaton & Wolk: The Men in the White Hats

Both are members of the Million Dollar Advocates Forum and one is a first-time Super Lawyer. But that’s not what’s impressive about them. What’s impressive about the partners at Eaton & Wolk, a boutique civil litigation firm based in Miami, is that they really are the good guys. And while they don’t save the day riding in on a white horse, they really do wear white hats.

Douglas Eaton and William Wolk founded Eaton & Wolk in 2010, but they’d been working together for almost a decade before then. Both come from a plaintiff ’s personal injury and medical malpractice background and still practice in those fields, but since launching their own firm their practice areas have expanded into class actions, federal and state false claims act prosecutions, healthcare fraud litigation, commercial and insurance coverage litigation and so much more.

They are on the cutting edge of what has been coined as “The Arbitration Wars,” which has to do with protecting an individual’s right to be heard in court against big corporations who slip binding arbitration and class action waiver clauses into everyday contracts, like cell phone and credit card contracts and online agreements, in an effort to immunize themselves and prevent the ‘little guy’ from ever seeking justice.

They are one of the founding law firms of Litigation Partners PL, a consortium of five highly regarded Florida plaintiff ’s firms dedicated to representing whistleblowers and prosecuting False Claims Act and healthcare, tax, and securities fraud cases nationwide. Its website is at www.federalwhistleblowerlawyers.com.

“It’s important to us in a case to get to the heart of the matter and actually do some good,” Wolk said, “and representing the United States against people and corporations who defraud the government is one of the best ways to do it.”

For example, a common problem in healthcare is an almost hidden fraud known as “upcoding.” As Wolk explained, “In many Medicare HMO programs, Medicare pays doctors a fixed monthly amount based on a patient’s diagnosis. The doctor gets a whole lot of money for big chronic diagnoses and much less for ordinary diagnoses. So they “upcode,” and diagnose a patient with a high-paying chronic diagnosis like bipolar disorder, instead of the ordinary, short term depression the patient actually has. The patient gets stigmatized with a diagnosis for a condition they don’t actually have; Medicare pays the doctor or clinic more money for treatment; but the patients don’t get any extra treatment because they don’t need it, since they don’t actually have the condition. The doctor and HMO then get to pocket the extra money.”

“The HMO is profiteering plain and simple by making a false claim and saddling taxpayers with debt and patients with false diagnoses in the process. The federal government and almost every state have laws that help insiders blow the whistle to stop this type of fraud, and we represent those whistleblowers,” said Wolk. “The common thread in our practice has always been helping the little guy against the big guy,” Eaton said about their major practice areas of medical and nursing home malpractice, personal injury, Medicare/Medicaid fraud, and consumer class action cases. “All of these cases hurt the little guy.”

“We recently had a class action case certified against Porsche,” a case Eaton is particularly proud of. “The Porsche battle,” he continues, “lasted six years. It involved the theft of high intensity headlights, mostly from the 911 and Boxster models. The lights could be easily taken in less than a minute from outside the car and were targeted by thieves as a result. The same problems affected certain Nissan and Infinity vehicles. Nissan worked with its customers and law enforcement to fix the problem. But Porsche didn’t. Instead, they made the customer pay, and at more than $1,000 per replacement light, that was simple profiteering.”

As part of Litigation Partners, Wolk is litigating a Federal False Claims Act case in central Ohio. An anesthesiologist there was cleaning and reusing disposable single-use needles in pain management procedures, placing his patients at risk and billing Medicare as if the needles were new to make more money. “Two of his nurses blew the whistle,” according to Wolk, and “we represented them on behalf of the U.S. government to recover the money Medicare paid and fight fraud.” The case is in the process of settling.

“We really are the good-guy lawyers,” said Eaton. “We always try to wear the white hats and be on the right side of issues.”

One of their recent high profile cases include an appeal currently pending against Citibank on the enforceability of its class action waiver in its mandatory arbitration clause. “We defeated the motion to compel arbitration at the trial level,” Eaton said. “The enforceability of class action waivers is a very active and hotly contested area of law. If they are ultimately enforceable, it will signal the end of consumer class actions. Banks, cable companies, cell phone companies among others, all have terms and conditions that put restrictions on how the little guy can seek redress when wronged. When consumers are deprived of $5 or $10 a month, most aren’t going to sue for that little. But when a big company does that to hundreds of thousands of customers, it adds up to millions of dollars. In class actions, when you get a hundred thousand customers asking the company to return that money, all of a sudden it becomes worth someone’s while to fight, and corporations have been working hard to put a stop to consumer class actions as a result.”

“In class action law suits, the little guy can band together with other plaintiffs to pursue a claim that can make real change even against a big impersonal corporation. That’s the point of a class action. This kind of justice levels the playing field to make it fair for everyone.”

“Corporations like Citibank obviously don’t care for a level playing field. So if you look at your agreement with the bank, one of the provisions says that you agree to mandatory binding arbitration, you give up your right to go to court, and you waive your right to bring a class action suit. This completely stops you from holding the company accountable or preventing them from committing bad acts.”

“Unfortunately,” said Eaton, “while many states have been pro consumer and struck down binding arbitration and class action waiver provisions, the U.S. Supreme Court is very pro business. Its recent 5-4 decision in AT&T Mobility LLC v. Concepcion put an end to most arguments against class action waivers except for an exception called ‘vindication of rights.’ That’s a small exception that says if one cannot effectively vindicate their rights in individual arbitration, then the class action ban and mandatory arbitration provisions can be voided. That’s where the current battleground is.” Wolk adds, “Doug to his credit has been asked to speak at national seminars on this issue and is an authority on it.”

“Consumers have lost their last line of defense and continue to be abused by big corporations. Class actions were often the only hope for consumers. What are you going to do without them, rely on the good faith of corporations?” Wolk asks. “Because,” he says, “you know that’s not going to happen.” Wolk, who was in the past successful in persuading insurance giant AIG to reverse a coverage decision and pay a multimillion dollar class action settlement on behalf of its insured, continues: “In the current legal environment, I suspect AIG would have fought much harder, and you have to be prepared for that now.”

In addition to their own cases, Eaton and Wolk also provide litigation support and appellate work for other law firms. “Because we’re trial lawyers,” said Eaton, “we understand appellate issues as trial lawyers and know how to preserve error when it’s made. That’s what sets us apart from other appellate law firms.”

Douglas Eaton is a recent past president of the Miami-Dade Justice Association and William Wolk is now secretary of that organization and serves on its board of directors.