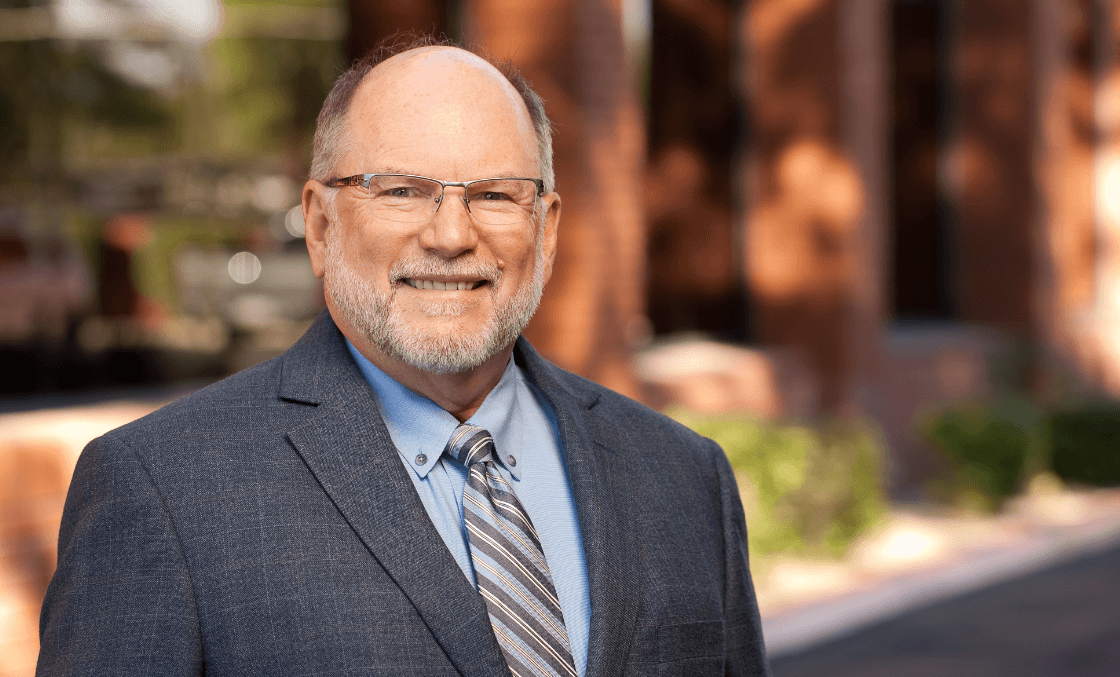 Edwin Bull: Running With The “Bull”

“I love this firm,” says Burch & Cracchiolo’s President and CEO Edwin Bull. “I love the people of this firm. I’m very proud of what we do as lawyers and how we are an integral part of our community.”

It was almost 40 years ago that Bull added his name to the firm’s roster of preeminent attorneys. In a profession known for frequent hopping from one firm to the next, he’s a bit of an anomaly. Bull joined Burch & Cracchiolo directly from law school and never looked back. Fully committed to his colleagues and clients, neither has he shopped for greener pastures.

“There’s no point seeking other opportunities,” he says firmly. “Everything I want or need for a productive and rewarding career is right here. This is where I began my law career and from where I’ll retire; although hopefully that won’t be for a very long time.

“It’s an honor to have been asked by my partners to serve in this role,” Bull adds. “It’s a lot of work and requires a lot of juggling and organization in order to serve my firm as well as my clients, but a dream come true for a Nebraska farm boy who thought law school was just a pipe dream.”

No stranger to hard work and long hours, Bull was raised on a farm in Nebraska. He was a senior in high school when events first led him to imagine a career in law.

“I was asked to be a juvenile representative to the Nebraska State Crime Commission,” he says. “The commission was comprised primarily of attorneys and law makers, so I was just one of two students who were invited to serve. It was my first opportunity to interface with attorneys and judiciary. I liked them and very much respected them and decided if I had the opportunity I would study law.”

That became his focus throughout undergraduate school, his goal to attend law school if possible. “My parents were actually sharecroppers,” he says, “They did not own the land, so I was not in a position to stay on the farm. Financially, even undergraduate school was a stretch. I knew I wanted to go to law school, but I didn’t know where or how.”

Knowing his parents were not in a position to help him financially Bull decided to take a year off from school and concentrate on making enough money to help support him through law school. Together with a couple of buddies, he formed a small construction firm in Nebraska counting on the old adage, “the harder you work the more you’ll make.”

Construction work is slow during Nebraska winters, so Bull and a friend who was in a similar financial situation, took the opportunity to tour law schools. Staying with friends, they visited a number of eastern colleges on a shoestring budget spending only three dollars on lodging. Later, the law school tour took Bull out west where he fell in love with Arizona.

“It was a very young, entrepreneurial state at that time,” he says. “Although I received offers from a variety of schools around the country, there remained what seemed to be the insurmountable problem of money. I presumed that the only way it was ever going to be possible for me to go to law school, was if I stayed in Nebraska where I could take advantage of in-state tuition.”

Then one day, the seemingly impossible happened. Bull received a letter from Arizona State University stating that if he wanted to attend their law school, they would waive any out-of-state fees, essentially offering the same tuition as Arizona students paid.

“Believe it or not, at that time it was cheaper to attend law school at ASU than it would have been had I stayed in Nebraska,” says Bull. “At any rate, I happily accepted their offer, packed up my worldly possessions and headed out west.”

That was in the fall of 1977. He was hired as a law clerk by Burch & Cracchiolo right after his first year and as Bull likes to say, “I’ve been here ever since, I just never got fired.”

In the summer of 1978, he met the woman who would become his wife. “Sue worked here as a legal secretary,” he says. “She did some typing for me and I returned the favor by taking her out to lunch. A few months later, she returned to work for her former boss who had opened his own firm. I wasn’t about to let her get away, I pursued her and four years later we were married.” Ed and Sue just celebrated their 35th anniversary.

Together they’ve raised two daughters. One graduated from ASU law school last spring and just passed the bar. The other is a student at ASU, majoring in bio-chem and integrated health.

“What’s been most rewarding professionally has been having this very small role in helping to build our community,” he says modestly. “Whether it’s a house that someone lives in or a regional mall where they shop, a restaurant where they dine or warehouse where they work, I’ve had the opportunity to work on many developments here in the Valley and I take pride in driving past developments that we had a little bit to do with.”

The recipient of numerous awards, honorary titles and greatly respected by those he serves, Bull has not let any of these accolades go to his head. Bull credits others for his good luck and success. He’s essentially still the Nebraska farm boy with a love of the land and appreciation for nature.

When he’s not helping to shape the Valley’s future development or helping guide the firm, Bull enjoys the outdoors.

“I’ve loved horseback riding since I was a little boy,” he says. “That’s still one of my greatest pleasures, and one that I’ve been delighted to have shared with our daughters. Really, anything outdoors with family and friends is relaxing and enjoyable to me.”

Bull combines his favorite pastimes with his seemingly never-ending desire to give back. An active member of Valley Partnership, he and many others from his firm have been on the front lines when it’s time to plant trees, shovel gravel or paint playground equipment at the annual Community Service Project Day.

“I’m a very fortunate man,” he says. “I’ve been blessed with a career that I love, working with wonderful people whom I admire and respect and have three of the most beautiful, talented and loving women in my life. Not bad for a farm kid from Nebraska!”