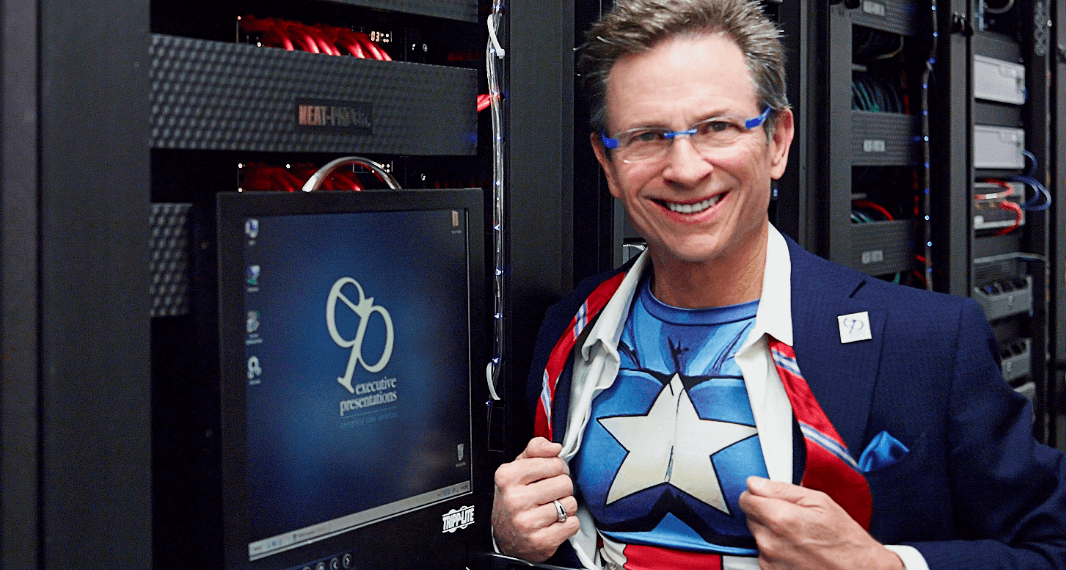 The famed 26.2-mile “Stadium to the Sea” Los Angeles Marathon has been a crowd-pleaser for Southern Californians and visitors alike for more than three decades. And while there were ample reports and celebrations for this year’s winners, one unsung hero deserves acknowledgement as well.

Rick Kraemer, founder and president of Executive Presentations (for once sans his iconic bow tie), was a first-time entry. Despite his distinctive Captain America race attire, this might not seem newsworthy, but there’s more.

Training for six months, Kraemer at 62 years young was physically and mentally prepared on race day. In fact, he covered the first 13 miles in well under two hours. But at the midway point something happened. Searing pain ripped up his right leg as he collapsed to the ground momentarily before girding up and pressing on. Gripped in agony that would certainly make most people concede and head for the ER, Kraemer simply did what he does best, regrouped, pumped up his mental muscles and forced his body to follow suit. Little did he know that he had torn a calf muscle, an injury serious enough to stop even professional athletes.

“I just followed my personal philosophy here at EP,” says Kraemer, “I did what it took to finish, regardless of the circumstances or effort. It’s what I’ve instilled in my team; EP always delivers.”

Deliver he did. This meant dragging his swollen, throbbing leg for more than 4 1/2 hours, until he crossed the finish line.

In addition to his injured leg, Kraemer was carrying the weight of $30,000 that had been pledged predicated on his completing the race. These funds were earmarked for an organization near and dear to Kraemer, the Foundation arm of the American Board of Trial Advocates (ABOTA).

“Once I decided on the L.A. Marathon, I assembled a team,” he says. “My first recruit was my long-time girlfriend, Judy Galanter, and then I challenged Brian Tyson, who has been with ABOTA since 2002 and has been the executive director since 2005. Brian and I had run together in the past, although never more than five miles.”

“After agreeing to run the L.A. Marathon with Rick, I felt I had made a colossal mistake,” says Tyson. “Nevertheless, Rick trained in L.A. and I trained in Dallas. We kept track of our progress and I was amazed at how committed and diligent he was. Just like everything he attempts in life, Rick does it with energy and enthusiasm.”

Galanter, whom Kraemer affectionately describes as his “better half ” and says he’s “so proud of,” had never run in a marathon before, yet she finished ahead of her boyfriend. She does however acknowledge his injury had a lot to do with that.

“Completing the L.A. Marathon and helping to raise $30,000 for the ABOTA Foundation are yet two more examples of Rick’s dedication to things he is passionate about,” she says. “Once he decides to do something, he sets a plan in motion and delivers.”

Integral to this plan was joining the Los Angeles Road Runners, running up to 22 miles every Saturday for 5 1/2 months prior to the marathon. Then, just about a week before the big day, Kraemer sent a note to long-time friend and 2011 ABOTA National President Harry Widmann.

“I just let him know that Brian, Judy and I would be running the marathon,” Kraemer says. “Harry then emailed about 30 people that he’s going to kick in $1,000 each for Brian and me to finish. By race day, we had over $30,000 being donated to The ABOTA Foundation.”

“Rick gives me too much credit,” insists Widmann. “All I did was take advantage of their hard work. None of those three had ever been in a marathon race before and they trained like crazy, we’re all very proud of him. I knew everyone would want to donate when they heard the trio was running.

“He’s the most popular member of ABOTA and he’s not even a member,” Widmann adds with a laugh.

Monetary support by ABOTA members wasn’t exactly surprising. Kraemer has close ties to this organization and has been their official photographer for more than 20 years. “Through my pictures, I’ve become a part of many lawyers’ lives,” he says. “I’ve been to their parties, weddings and funerals. When someone needs a photo, be it a judge, lawyer or industry vendor, they call on me.”

“If there has been one constant over the past two decades, it has been Rick Kraemer’s continuous devotion to ABOTA,” says Lewis R. Sifford, 2007 ABOTA national president. “His tireless efforts make ABOTA events more fun for everyone and are forever captured in the many memorable photographs he takes. Completing the Los Angeles Marathon to raise money for the ABOTA Foundation was just his latest contribution. Rick is truly a treasure.”

Already excited about the upcoming race, this new-found charitable incentive, ultimately benefitting civics education and other ABOTA programs, served to motivate the team further and intensify their competitive edge.

“I looked at training the same way we look at preparing our presentations,” says Kraemer. “Try to anticipate and prepare for every possible eventuality. In the courtroom, you can always expect the unexpected. As things came up in the race — like my injury — we prevailed through dedication, drive and determination. As our clients know, we always deliver.”

It’s only logical that Kraemer would apply the same techniques in preparing for the big race as he does in his business. Building a successful business, consistently delivering the best results for clients is not a sprint but a marathon. As Kraemer has pointed out, this requires not only dedication and determination but precision, pacing, and people who share the same vision.

Under his leadership, the innovative and creatively versatile EP team has already sailed past the 30-year mile mark, with no signs of slowing down. In fact, since bursting on the Los Angeles legal scene in 1986, the pace has only accelerated, continually adopting the latest technology to enhance their famed visually engaging and effective courtroom presentations.

Reaching near celebrity status, EP is the recognized leader in the world of trial presentation services, a unique niche that Kraemer, a veritable marketing genius, conceived and filled more than three decades ago. For the handful of readers who are not familiar with Executive Presentations, the short definition is that they are a comprehensive trial support services firm utilizing multimedia technology to clarify and simplify the strategic points of a case through visual presentations.

Let’s face it, regardless of how riveting or intriguing the subject matter of a case might be, extensive recitations of stats, facts and expert testimony can be confusing, mundane and, for most jurors, abstruse. Kraemer had the foresight to understand this, and utilizing his background in sales and marketing conceived a creative remedy. His intrinsic insight as to how people absorb information, and essentially, what makes them buy what they buy, led to the birth of EP.

“The power of subliminal messaging cannot be ignored,” he says. “You find a way to present to juries to help them comprehend this deluge of facts and figures in a way that’s both clear and engaging. Ultimately allowing them to ‘buy’ not be sold. Our multimedia presentation designers and trial technicians are specialists in litigation concepts and strategy, combining technical and analytical insight with established color psychology and layout theories to develop clear and persuasive presentations specific to each attorney and their case.”

It’s true, beneath all the advertising and marketing techniques lies a solid foundation in the science of human psychology. Abstract concepts, tedious details and a litany of statistics, numbers, and obscure legal precedents do nothing to spark the interest of the average juror. However, offer them a well-executed visual version of this same information and suddenly the glazed look is gone as they sit up and take notice. The collective, “Ah … yes!” is almost palpable.

Just as he’s always had the vision and foresight to continuously seek out the latest and most dynamic technological advancements, so too has Kraemer been intuitive and highly selective in choosing his team. Surrounded by these talented and dedicated professionals, he has carved out an all but exclusive corner on this service niche market.

“Our trial technicians and multimedia specialists have years of wide-ranging ‘hot seat’ experience in both civil and criminal trials,” says Kraemer, “including high-profile, high-stakes cases. We’ve earned our outstanding reputation for in-trial support by consistently delivering the highest level of professionalism in court.”

Those closest to him have only the highest regard for Kraemer and the ethics and standards he espouses. Though she did not run in the marathon, Susan Campbell, general manager and vice president of Executive Presentations, demonstrated her unwavering support along with Alma Hawk, creative services production manager, with loud cheers and hard-to-miss signage rooting for the team along the course.

In much the same way, Campbell has been Kraemer’s proponent, right-hand and business running mate since May 1997, recently celebrating her 20-year anniversary with EP. “I’ve been Rick’s closest professional confidant for 20 years, and it didn’t surprise me a bit that he ran his first marathon at 62,” she says. “And, despite suffering a leg injury at mile 13, he still finishes with a smile. Rick puts enormous energy into everything he does and no obstacle is too daunting for him. Whether he’s out on the street or in the courtroom, his dedication and determination drive him to the finish line.”

For more than 30 years, Kraemer and his team of 20 professionals at Executive Presentations have been helping attorneys win in trial, and in so doing have won the respect and loyalty of California’s legal elite.