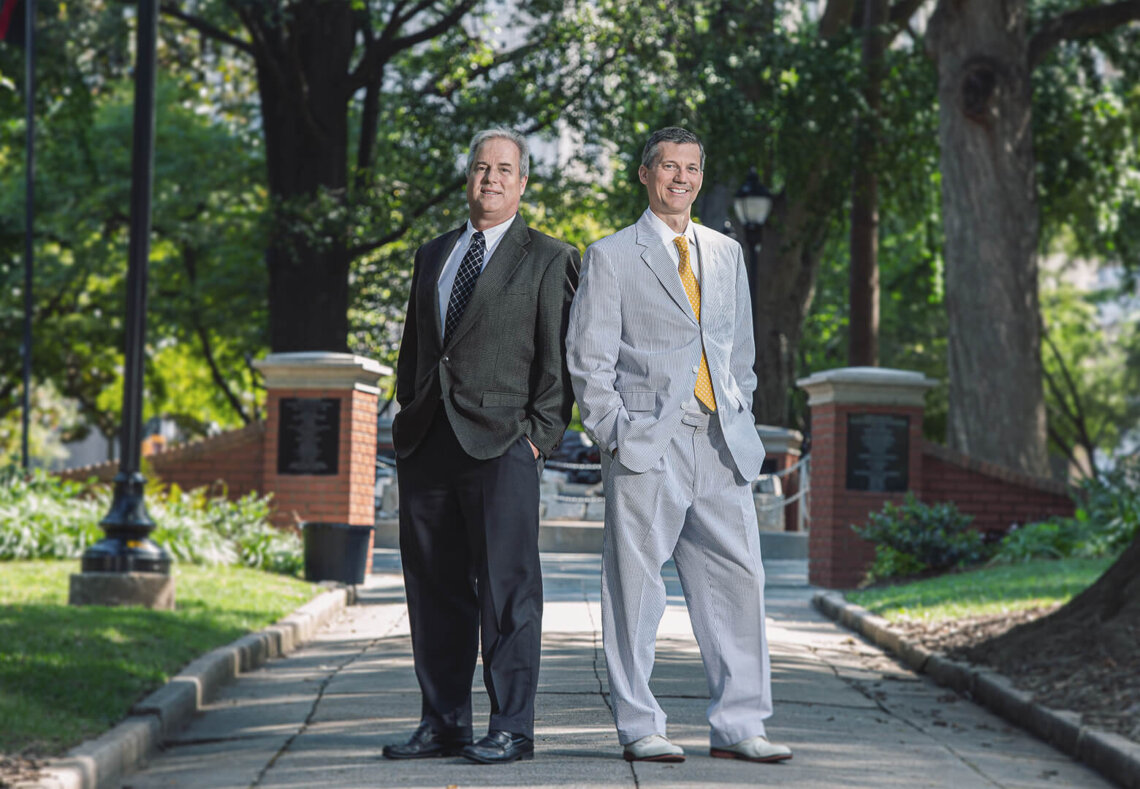 Fiduciary Litigation Group: Dispute Resolution From the Head and the Heart

“A lot of people call and tell us a story like this: ‘Mom is pretty independent but is in the early stages of dementia, has some memory issues, and my sister recently moved in with Mom or moved Mom to her place, and I don’t know what’s going on,’” explained Raleigh fiduciary litigation attorney Lee Laskody. “She is taking Mom to a lawyer, moving bank accounts – I am worried!”

These kinds of cases were the impetus for Laskody and Raleigh fiduciary litigation attorney Tom Sparks to launch Fiduciary Litigation Group last year. The firm represents claimants and fiduciaries involved in adverse estate, trust, and guardianship proceedings. They handle cases involving estates of over $200,000.

The two attorneys crossed paths practicing at a highly respected Durham law firm that specializes in wills and estates. They identified the need for attorneys who could litigate disputes among family members over the assets in an estate.

“Everybody’s perception is their reality,” Sparks said. “In a situation where tempers are short and feelings are brittle, that’s when we get involved. The goal here is not to spend all the money on legal fees. But more making sure that the parties all get the assets.

“The one common denominator in 99 percent of our cases is the failure to communicate,” Sparks continued. “It raises suspicions and there’s really no reason for it. Many of our clients are people who discovered that a family member in a position of trust has taken advantage of the situation. This may involve an elderly parent who is vulnerable, or suspicious changes to a will or trust made right before death.”

EVERY DOCUMENT TELLS A STORY

“Our first step is usually to investigate by following the money,” Sparks continued. “We often review bank and financial records to find out what is really happening. Sometimes we must file a court proceeding so that we can obtain the financial records. If there is financial exploitation, we take legal action to stop it, remove the off ender from their fiduciary role, and return the funds whenever possible.”

“The number one kind of abuse that we see is what I have come to call ‘theft by power of attorney,’” said Laskody. “And it’s a horrible way of saying it because sometimes it’s inadvertent, but it is a situation where somebody becomes the attorney-in-fact for an elder person whose health is in decline, and they transfer all of the person’s accounts beneficiary designations, etc. to themselves. Sometimes they isolate their mom or dad, and now their other family members can’t reach them by phone. When they come and visit, they’re unwelcome. And this other family member is telling Mom or Dad that everyone else is out to get them or so-and-so is a bad actor.”

“Most of the people who do that honestly believe they’re consolidating things for the elderly person,” Sparks said. “They may not trust their siblings. But regardless of intent, there are enough of them to keep us busy stopping that abuse, and to the extent that we can, we reverse whatever has been done.”

Other issues can arise when the elderly person has not updated their will to reflect a blended family, new family members, or a second marriage.

Sparks is quick to point out that he and Laskody are almost complete opposites.

“When both my parents passed away, I went through the dying process with them, and that changed my thinking about all the issues that come up around mortality. I decided I wanted to get into elder law,” said Laskody.

Sparks is currently going through the challenge of helping manage his father’s estate for his family as his father struggles with Alzheimer’s.

Both said their strategy for their clients is the same as for their own aging family members.

“We want their lives to be better. These people have worked hard all their lives, and they obviously have something that somebody’s fighting over,” said Sparks. “We tell the families, it’s not your money; it’s your parent’s money. If they want to take it out in $1 bills, put it in the front yard, pour butane on it and burn it, they can do that. It is their money.”

“So, the fight shouldn’t be about what you’re going to get. It should be about the quality of life that the elder can experience from here moving forward and that’s our focus,” added Laskody.

“The challenge for us is that we do this thing that is very analytic. What is the legal situation, and what can we do? That part is the head. But I want to approach it with my heart also – to care about people. If you put someone in front of me who’s having some challenging and hard times, I want to think about how we can make this situation better. How can we resolve it for them?”