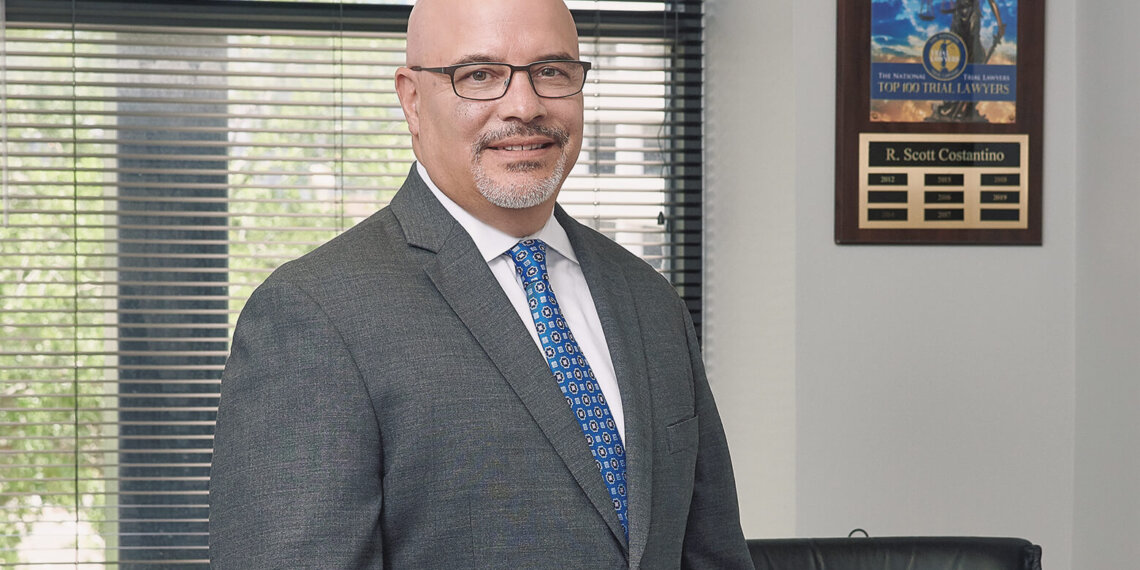 R. Scott Costantino has been selected as President of the Florida Chapters of the American Board of Trial Advocates after serving as an active, engaged member for the past 12 years. In 2012, Costantino was selected as the Jacksonville Chapter’s Lawyer of the Year and served as their President in 2015. He has received multiple awards and recognitions throughout his 30 years in civil trial law for his dedication and commitment to his clients. Costantino said he is honored to stand in the shoes of the great civil trial lawyers who have led FLABOTA before him. Howard Coker, Bob Cole, Josh Whitman, Joe Milton, Patricia Crauwels, Chuck Baumberger, and Jeff Goodis are just some of those he credits for having shown by example the importance of civility and professionalism in the practice of law.

FLABOTA is made up of eleven Florida Chapters of a national organization known as the American Board of Trial Advocates (ABOTA). The preservation of the civil jury trial, “Justice by the People,” is the primary purpose of the ABOTA. They seek attorneys who display skill, civility, and integrity, to help younger attorneys achieve a higher level of trial advocacy and to educate the public about the vital importance of the Seventh Amendment: the right to jury trial. Membership is by invitation only and split in half, consisting of 50% civil plaintiff trial lawyers and 50% civil defense trial lawyers.

“I love the fact that our organization is split evenly between plaintiff and defense civil trial lawyers,” said Costantino. “Th is ensures that our priority is to promote a legal system that is fair to all parties. Further, the judges do not hesitate to reach out to FLABOTA when a trial practice issue needs attention.” Costantino believes that being hands-on is imperative to the process of improving the practice of law and ABOTA gives its members a multitude of opportunities through its initiatives to improve their own practice as well.

Costantino hopes to raise FLABOTA’s profile in the legal community so that the organization will be one that younger civil trial lawyers aspire to join once their trial experience has grown. The goal is to encourage prospective members to try as many civil cases as possible. It’s understandable that the vast majority of civil cases settle prior to trial. However, FLABOTA exists for lawyers who try civil cases, so they offer programs to raise the level of professionalism and ethical behavior for their civil trial lawyers. Once a member of FLABOTA, the best way to join the leadership is to get involved in some of the many outreach programs they offer.

Costantino recently attended the Florida Bar Voluntary Bar Leaders Conference in Tampa, Florida. At this conference, Costantino met with leaders from other voluntary bar associations in an effort to work together to achieve the common goals of each organization. Each ABOTA chapter also holds quarterly luncheons with featured speakers on various topics including legislative updates that are usually well attended by the local judiciary. The chapters also hold professionalism seminars that are tailored toward the practice of civil trial law.

“My goal is to attend at least one function held by each of our eleven FLABOTA Chapters,” said Costantino. “I want to ensure that each of our members are fully aware of FLABOTA’s outreach programs so that hopefully all our chapters will be active and participating in achieving our mission.”

LOOKING TO THE FUTURE

Historically, the trend has been a decrease in the number of civil jury trials, and over time, there will be fewer experienced civil trial lawyers to actually try the cases that need to be tried. Trials are expensive and time consuming, and often involve very high stakes for the parties. Alternatives to trials, such as arbitration and mediation, are also resulting in fewer civil jury trials.

“Our founding fathers had the wisdom to see that a civil jury made up of ordinary citizens is still the best way to resolve disputes between parties when negotiations fail. This is a right guaranteed to us by the 7th Amendment,” said Costantino. “To this end, we will always need professional and ethical civil trial lawyers who have the experience to take cases to trial when all other avenues of resolution have failed.”

The mission of FLABOTA is to preserve the right to jury trial in civil cases as guaranteed by the 7th Amendment to the U.S. Constitution, promote professionalism and civility in the practice of law, and protect the independence of the judiciary so that it is free from political influence. They pursue these goals through their outreach programs, such as The Teachers’ Law School and the 7th Amendment Symposium, their professionalism programs for civil trial lawyers, such as Civility Matters, and their efforts to defend our judges against unfair criticism in the media.

Charlene is the Founder and Creative Director of CSPR. Prior to starting her own company to bring excellence to area events, Charlene was selected Best Local Pitchman, by Folio Magazine and Most Crush-Worthy Celebrity by the Florida Times Union. She is also an Emmy nominated writer and received numerous awards for her contribution to broadcasting.