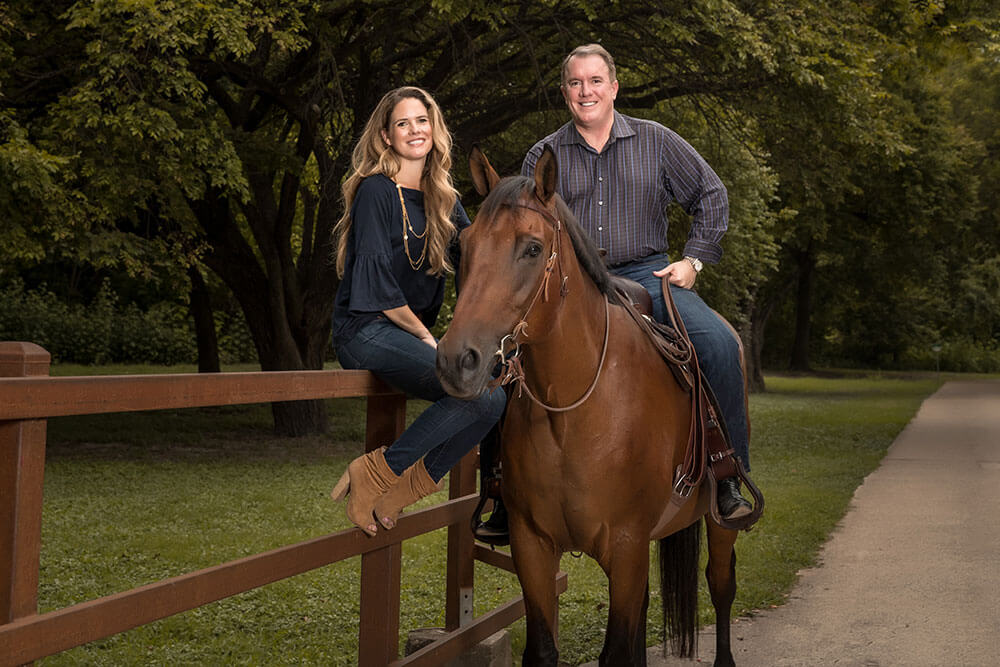 George Milner: Thrown From a Horse Landing On a Career

Milner was hired by the Dallas County District Attorney’s Office, where he surprised himself by falling in love with criminal work.  He resolved never to return to civil practice.

In the long run the loss proved to be a win. Milner pursued other avenues, and eventually co-founded Milner & Finn, a criminal defense firm that has obtained hundreds of jury trial acquittals, more than 100 felony no-bills, and countless dismissals. Milner himself has tried more than 250 criminal cases. Creating his own firm was, however, not in his original career plans.

THE MARKET FALLS; AN ATTORNEY RISES

Milner is the son of George Milner, Jr., a legendary Texas attorney. He grew up watching his father experience first-hand the struggles and challenges an attorney faces to be successful. “I never wanted to be a lawyer as a result of what I saw my dad go through. I didn’t know anything about the work other than I knew what he did for a living. I didn’t participate in it in any way and it truly did not seem appealing to me.”

His career sights were set on becoming either a commercial real estate professional or a stock broker. But when Milner graduated SMU, the nation’s economic situation created the need and the option for a career in another direction – the law.

“I didn’t want to leave Dallas. That limited my options. The stock market crashed, real estate was not doing well, and I found myself tending bar part-time,” he says.

A family friend, a partner in a law firm, found him a position clerking at the law firm Hughes & Luce in the litigation section.

Of his time there, Milner recalls: “On the totem pole, I was the bottom. But the work was exciting. We’d get hired on a case and you’d have to become an expert in that area. You had to learn that industry. I thought it was a fascinating deal- every new case allows you the opportunity to become an expert in some area whether it be technology or oil and gas or some other field.”

He found he also loved the people, “I thought, ‘This is the deal for me,’ I applied to law school, got accepted, and moved on in a direction I’d never planned.”

Milner was hired by the Dallas County District Attorney’s Office, where he surprised himself by falling in love with criminal work. He resolved never to return to civil practice. In 1994, Milner left the District Attorney’s Office to join his father, George Milner, Jr., and began defending some of the same people he’d previously prosecuted. One such client said, “It didn’t take me long in the first trial when you prosecuted me to realize I needed you as my lawyer.”

Milner has appeared three times on the nationally broadcast Court TV, has been selected numerous times as one of Dallas’ Best Lawyers in D Magazine, and has been named by Texas Monthly Magazine, as a Texas Super Lawyer in the field of white-collar criminal defense. He is AV rated by Martindale-Hubbell, a multi-volume national listing of attorneys.

“I love being a lawyer; I’ve been doing it for 26 years. I’m blessed to have fallen into something I love. And, I happen to be pretty good at it,” he says.

Milner’s philosophy for building a successful criminal defense firm was to seek out experienced lawyers who were “hungry” – lawyers who had a solid track record of accomplishment, but who were looking to invest themselves fully in an up-and-coming organization. Milner says there wasn’t time to train rookies. We all had about a decade of experience. “We built this juggernaut and we quickly became known as a powerhouse. We also had a lot of fun taking care of the people we represented.”

He says that contrary to images in popular culture, most of his clients are normal, everyday people. “The clients we represent are people you would go to lunch with or invite into your home. They are people who happened to be accused of something. We are not representing someone who sticks up 7/Elevens or something like that. That’s just not what we do. We represent the kind of things that ordinary, law abiding people could find themselves accused of.”

A major element in the firm’s rapid rise and their success is Milner’s application of lessons learned while on the high school rodeo circuit, such as the value of individual success within a team environment. He says, “On the rodeo team, we helped each other even though we were essentially competing against one another. If a rider on a different team needed help, you’d help them. You want everybody to compete at their best when you’re in the arena. That’s what it’s like in the courtroom and our law firm. It’s the opportunity for individual achievement, but you want everybody to do well.”

One of the greatest rewards of criminal defense, Milner says, is the opportunity to give someone a second chance in life whether or not they did something wrong. “I had a federal client who every time he and his wife had a new baby, he would send me a picture with a card. He would write, ‘This child would not have been born if not for you.’ I was truly touched. Words like that give you an amazing sense of accomplishment.”

Milner says, “I believe that my presence in a case will make a difference to the client – that there will be a better result because I am on the case. I genuinely care about my clients. I have had many clients who needed a lawyer to handle a non-criminal matter, but who would want me to personally handle it. I tell them this isn’t my area of expertise, but I’ll find a lawyer for you. Even when I’d find a lawyer for them, they’d still want me to be involved. They trust me, and they know I’ve got their backs.”