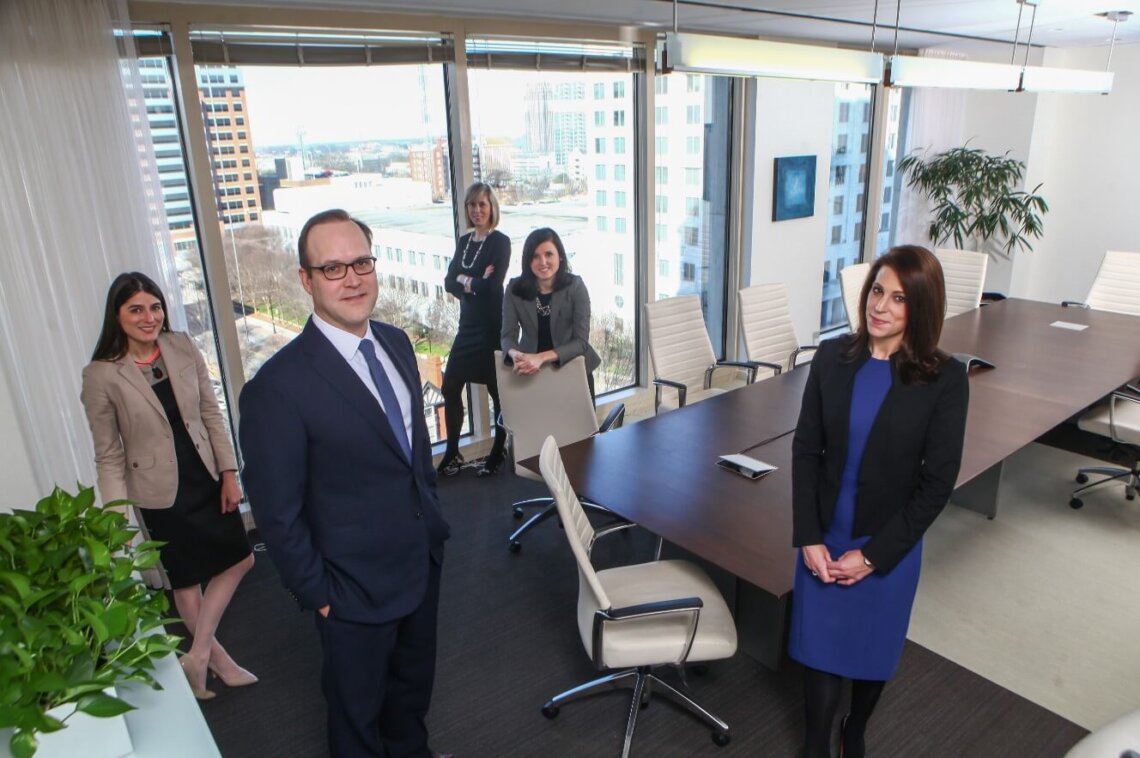 As courtrooms go, this DeKalb County chamber – with its beige ceiling and picture-free olive walls surrounding four rows of audience-filled pews set behind seven attorneys, two defendants and one plaintiff sitting at two picnic-size tables – was unspectacular. The judge was perched in front of the Georgia State seal and the Georgia and United States flags. The jury was comprised of six males and six females. But to everyone involved on the two opposing sides, like with most catastrophic medical malpractice cases, this multi-million-dollar lawsuit was personal, professional and stressful.

It was also the nearly 100th case on which Daniel J. Huff has served as trial counsel.

“I love the challenge of a trial,” says Huff who has tried 35 medical malpractice cases in the past five years. “I’m a true believer in the jury system. It’s exciting to present a case to a bunch of citizens trying to do their best. As attorneys, we try to learn as much as we can about a particular area, and then try to figure out the best way to explain something that is complicated. You need to be very visual. I don’t agree that you dumb it down for juries. We use a lot of poster boards and video, showing anatomy and medical instruments. There’s no way to be too visual when explaining something. And it’s rewarding seeing the understanding in the jurors’ faces.”

Winning catastrophic medical malpractice cases – those that entail permanent injury to someone – requires special expertise, especially when defending health care professionals or medical institutions. Plaintiffs, in these cases, have suffered an enormous loss of some kind. Defense lawyers must be sensitive to that loss, while defending and protecting their clients who have devoted their lives to taking care of people. “You have to have experience with juries,” says Huff, to know what can or cannot be persuasive in trial. “Our firm is dedicated to defending and trying catastrophic cases, and we continue to receive harder and harder cases to defend.”

“We have the privilege to try cases that are complex and high profile,” adds R. Page Powell, Jr. “There’s a lot at stake, both financially and in terms of the defendant’s professional reputation. It requires a unique skill to take a case that involves complex scientific medical issues and synthesize it into a story that will resonate with the jury.”

Prior to opening their firm, Huff Powell & Bailey LLP, each of the attorneys had worked in medical malpractice defense, Huff starting in 1991, Powell in 1994 and M. Scott Bailey in 1996. “Often, there would be multiple defendants so we worked together,” recalls Powell, whose father was a surgeon. “For the first 10 years, we got to know each other and developed a lot of respect for each other. We were roughly the same age and all had the privilege of being trained by really good lawyers who gave us experience early in our careers. There was a lot of commonality.”

In fact, they even had common clients who thought there was a need for a new defense firm, says Bailey, who has tried nearly 50 medical cases only one of which resulted in a plaintiff ’s verdict. “Many attorneys of our age had gone over to the plaintiffs’ side. Many of our contemporaries are now successful lawyers representing plaintiffs.”

Powell, whose focus includes pediatric medical malpractice, refers to the three launching their firm as “serendipity.”

“The timing converged coincidentally,” he says. “We were friends and knew each other professionally. We were each ready to make a change. As a firm of trial lawyers, we really think we are uniquely positioned and qualified to try high-profile catastrophic injury cases in the modern world. We use cutting-edge technology, and have a unique niche. No other firm combines our youth, energy and depth of experience.”

More than half of the attorneys in the firm are under age 40. This contrasts with, Huff points out, the average age of malpractice defense attorneys rising every year – at the same time that juries are getting younger. “That’s why the visual part of a trial is so important,” he says. “The younger juries, raised on technology, have shorter attention spans and have a different way of learning.” They don’t relate to 60-year-old attorneys lecturing them at trials.

Huff emphasizes that he particularly enjoys “being able to teach younger lawyers to be trial lawyers. You see how they get better, and the camaraderie that develops as we get ready for trials. I know I enjoyed learning by doing. And when I’m done, I will have left a group of people behind who are able to successfully do this work.”

Bailey, who recently passed along the job of managing partner to Anna Fretwell after 12 years, says he is also especially proud of the young lawyers the firm has developed. “There’s not a lot of turnover,” he says.

Fretwell, like Huff, Powell and Bailey, values the early experience she had as a trial lawyer. “I did not have a medical or scientific background, but knew in law school that I wanted to try cases and work for a small firm where I would get a lot of experience early in my career,” she says.

“I had the unusual opportunity of serving as lead counsel in a medical malpractice case at the end of my first year of practice,” she continues. “A couple of weeks before trial, the senior lawyer decided to make a career change and left. Because I was the only lawyer familiar with the case, and because it was relatively straightforward as malpractice cases go, I did voir dire, opening and closing, as well as several witness examinations. A partner coached me before and during the trial, but the experience gave me a lot of confidence.

“The learning curve was steep, but I loved the work from the beginning and was grateful for the chance to continue representing physicians and health care providers when Huff, Powell & Bailey was founded in 2003,” she adds. “No two cases are alike, so it never gets boring. And our clients are so invested in defending themselves and so appreciative of our services that it is rewarding to help them navigate the litigation process and (most of the time) achieve a satisfying result for them.”

Partner Michael R. Boorman is the go-to man for product liability cases. “Product liability is an interesting and rewarding practice area because you have to view the product through a few lenses – engineering, law and, most importantly, common sense,” he says. “Because the stakes are often high, it provides the opportunity to work with and against intelligent and accomplished lawyers. We generally work for large companies. There is a perception amongst some that big companies only consider the bottom line and are willing to put profits over safety. My experience has been the opposite. The men and women who spend their lives making a product take pride in their work. They care deeply about the safety of their customers. The challenge is overcoming sympathy and defeating bias by explaining the great lengths taken during the design process.”

For Huff, whose father was an attorney, one of the biggest challenges of his work is preparing clients for trials and for taking the stand. “For a physician, there’s nothing more personal and professionally life changing,” he says. “A trial is very public. The physician sits there and listens to charges. They don’t have control over the process and they are used to having control.”

“These trials are probably the most traumatic experience for both the plaintiff and the doctor,” adds Bailey.

Partner Jeffrey D. Braintwain particularly relates to the firm’s clients. “I was always interested in medical malpractice having grown up with a physician father. I saw the effect of claims on physicians – how personally the allegations are taken. I understood that for dedicated health care providers, claims and lawsuits are not just part of the job; they are every bit as personal and all-consuming to them as they are to aggrieved patients and family members. I wanted to be on the side of people who devote their lives to helping others.”

A large part of Braintwain’s practice involves emergency medicine. “The cases are stimulating intellectually and tend to involve legal issues that are more complex than the typical med mal case.”

The partners refer to their trial work as a high-wire act. But they don’t perform without a net. The team of partners and associates work together on cases.

One of Bailey’s legal mentors emphasized to him early on that being a trial attorney is very stressful. “When in trial, you must accept that you’ll be a terrible father, husband and friend. It’s total immersion. But when we win, it’s worth it.”