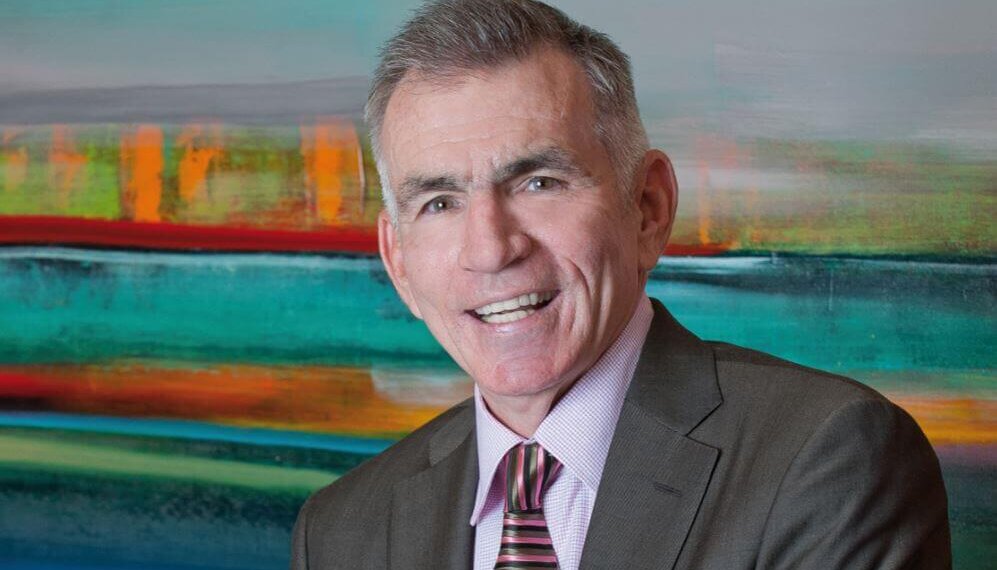 “Great leaders are almost always great simplifiers, who can cut through argument, debate, and doubt to offer a solution everybody can understand.” — General Colin Powell

John Genovese, senior founding shareholder at Genovese Joblove & Battista, P.A. (GJB) epitomizes the qualities found in a great leader. His unpretentious and authentic character is unquestionable and the passion he shows for his practice is infectious. AV-rated by Martindale-Hubbell, Genovese has been listed in every edition of Woodward/White’s The Best Lawyers in America since 1989 and has been named to the Legal Media Group’s guide to the World’s Leading Insolvency and Restructuring Lawyers, one of only sixteen Florida attorneys named. He has been described by Chambers & Partners USA as “tough as nails when fighting to get a solution.” They have also named him a top Florida bankruptcy attorney.

A self-proclaimed “lawyers’ lawyer,” Genovese recognizes the importance of working collegially with other attorneys. “Practicing insolvency litigation for so long, I have come to recognize nearly every opposing counsel, either by name, face or reputation. I truly value the importance of working collegially with other attorneys because you will come across them again and for us, many end up referring their clients if they find they are unable to come up with a suitable solution on their behalf. You can do all the public relations you want, but our opposing counsel are astute about choosing other attorneys. Your reputation precedes you and we strive to keep ours in good order.”

AV-rated Shareholder Allison R. Day concurs with Genovese. “We protect our reputation as straight forward, collaborative attorneys who work with clients and opposing counsel to determine the best solution. We are aware that litigation isn’t always the answer,” noted Day. “Judges know us in and out of the court and appreciate the integrity that we exhibit in relation to all of our cases.” Genovese co-chairs the firm’s reorganization and insolvency practice with Paul J. Battista. John’s practice includes troubled loan workouts, bankruptcy, and insurance insolvencies with an emphasis on complex litigation in bankruptcy and U.S. District Courts.

While the firm is smaller, the number of partners, associates and assistants in the insolvency practice rivals that of some of the largest firms in South Florida. GJB is recognized in the top band in Florida for insolvency by Chambers & Partners USA and offers its clients a ‘deep bench’ of attorneys, with years of successful litigation and restructuring experience. “Aft er spending nearly 30 years serving clients in insolvency cases, it has become readily apparent that it is oft en better for the clients to work with smaller firms,” noted Genovese. GJB is known for its efficiency, employing large firm policies in a small firm setting. “Each case is assigned a partner who takes lead, based on their individual strong suit, ensuring that our clients get the right fit,” noted Mariaelena Gayo-Guitian, partner, GJB. “Unlike larger firms, each associate gets involved in cases from day one and John and Paul help mentor the young attorneys like a coach. It is because of this nurturing environment that our team continues to grow.”

GJB is unlike other firms in that they have experienced very little turnover since its inception.

“We have had nearly no turnover at the partner level and very little in the associate and director levels,” said Genovese. “Over the past 14 years, we have grown rapidly to become one of only two or three local firms who are able to handle all sides of complex insolvency cases, reorganization and litigation and offer the bandwidth to see all of our cases through to fruition.”

“Because of the positive environment that John fosters, we sincerely enjoy coming to work,” noted Glenn D. Moses, a shareholder at GJB. “It’s a bonus that we all genuinely like each other and foster healthy respect for one another, which adds to a positive work environment that is tangible to clients and potential clients who visit our offices.”

Firm Partner Barry P. Gruher agrees. “We have a cohesive team of very talented attorneys, with a seamless cooperation between offices. John ensures that there is no divisiveness in the firm and we all are very supportive of one another.”

Leading a team of 10 AV-rated partners who offer a wealth of backgrounds gleaned from years of practice in this specialty, Genovese is imbued with a strong belief in a team mentality. He enforces an ‘open door policy,’ making himself available to colleagues who may need a sounding board to discuss the firm’s current cases whenever possible and recognizes and acknowledges the value of each member of his team.

“John is a brilliant attorney,” noted Robert F. Elgidely, a partner at GJB. “He has an innate ability to hone in on the most relevant facts and despite his incredible case load, he manages to remain approachable and adheres to his belief in a team approach.”

“John has successfully argued and negotiated hundreds of bankruptcy cases over the course of his career and it goes without saying that he has probably come across nearly every issue that may arise in relation to bankruptcy litigation,” noted Battista, a member of the American College of Bankruptcy, shareholder and lead for the Chapter 11 reorganization side of the insolvency practice at GJB. “Th at said, he is an invaluable asset to our firm and to us as individual attorneys. He is always willing to offer his perspective and advice when solicited.”

Genovese and the insolvency team at GJB have a long roster of ongoing and recently completed cases. The team has participated in many monumental cases resulting in unparalleled monetary recoveries on behalf of their clients.

For example, Genovese acted as co-counsel for the class action shareholders/noteholders in the Enron Chapter 11 proceeding handling insolvency issues in the Enron Chapter 11 and related cases, which class action resulted in settlements in excess of $7.2 billion. With firm Partners Robert F. Elgidely, David C. Cimo and Theresa Van Vliet, Genovese is currently serving as litigation counsel to the Chapter 11 trustee in re Rothstein Rosenfeldt Adler, P.A., reported to be the largest Florida Ponzi case and the 4th largest in U.S. history. GJB, together with Ver Ploeg & Lumpkin, P.A., pursued claims against Gibraltar Private Bank and Trust Co. for aiding and abetting Mr. Rothstein’s breaches of fiduciary duty to RRA, aiding and abetting conversion and wire transfer negligence. In his lawsuit against Gibraltar, the trustee alleged that Rothstein used Gibraltar in order to prop up the house of cards and permit him to loot RRA. Rothstein also used these accounts to fund a lavish lifestyle with diverted monies. GJB has litigated and has been involved settling litigation matters for an excess of $100 million, which could result in an unprecedented 100% return to unsubordinated general unsecured creditors.

Genovese also worked closely with Partners Robert F. Elgidely and David C. Cimo on another substantial Ponzi scheme case pending in Tampa, Florida. Ulrich Engler was a German national who purported to operate a day trading business in Cape Coral, Florida, and who solicited investments from individuals located throughout Europe. GJB was then hired by a large number of European creditors in order to file an involuntary bankruptcy petition against Engler so that litigation could be pursued and assets could be equitably distributed. The bankruptcy trustee then hired GJB to prosecute the litigation claims for the debtor’s creditors. “Despite the unique challenges in this bankruptcy case resulting from Engler’s status as a fugitive and the unavailability of traditional corporate records, over $10 million has been recovered to date for the debtor’s creditors,” noted Robert Elgidely, partner at GJB. The team’s prowess and hard work is evident in their success record and is even echoed in sentiments from presiding judges. In the Fiddler’s Creek Chapter 11, the Honorable Judge K. Rodney May said on the record that “GJB did simply a masterful job orchestrating the case, the best he has seen in his career.” Attorneys Paul J. Battista, Mariaelena Gayo-Guitian and Heather L. Harmon worked tirelessly on this case of first impressions. GJB represented Fiddler’s Creek and 27 of its subsidiaries and affiliates, developers of luxury homes in Naples, Florida, in their Chapter 11 proceedings and confirmed 100% payment plan. After an 8-day, highly contested confirmation hearing, the bankruptcy court allowed GJB’s clients to decelerate and restructure the tax bonds, allowing for the restructuring of hundreds of millions of dollars.

“There are far-reaching consequences related to the resolution to this case,” said Heather Harmon. “It could result in more negotiation and less litigation in relation to tax bond holders.”

Firm attorneys Paul J. Battista, Allison R. Day and Carlos E. Sardi are currently involved in litigation on behalf of their client, Maury Rosenberg, who was forced into involuntary bankruptcy by special purpose entities. GJB was able to get the case dismissed by arguing that the petitioner did not have any standing. The jury trial was bifurcated and the team received a favorable result on the behalf of the client including a punitive damage award.

“The mold has been broken as a result of the unique resolution of this case,” stated Carlos Sardi, the newest partner at GJB. “With involuntary bankruptcy, our client’s reputation was tarnished; his loans accelerated. It’s difficult to put a monetary amount on the damages he suffered, but we are optimistic about reaching an agreeable resolution.”

Away from the Office

While leading the insolvency practice requires a great deal of commitment to meet both client and firm needs, Genovese stresses the importance of maintaining a healthy work-life balance. “We, as attorneys, recognize that our practice will be demanding of our time,” noted Genovese. “That does not, however, mean that I am unable to recognize the important things in my life. I enjoy spending time with my wife Lauren, and supporting her work on charitable causes and, of course, with my two children and my extended family in the firm.”