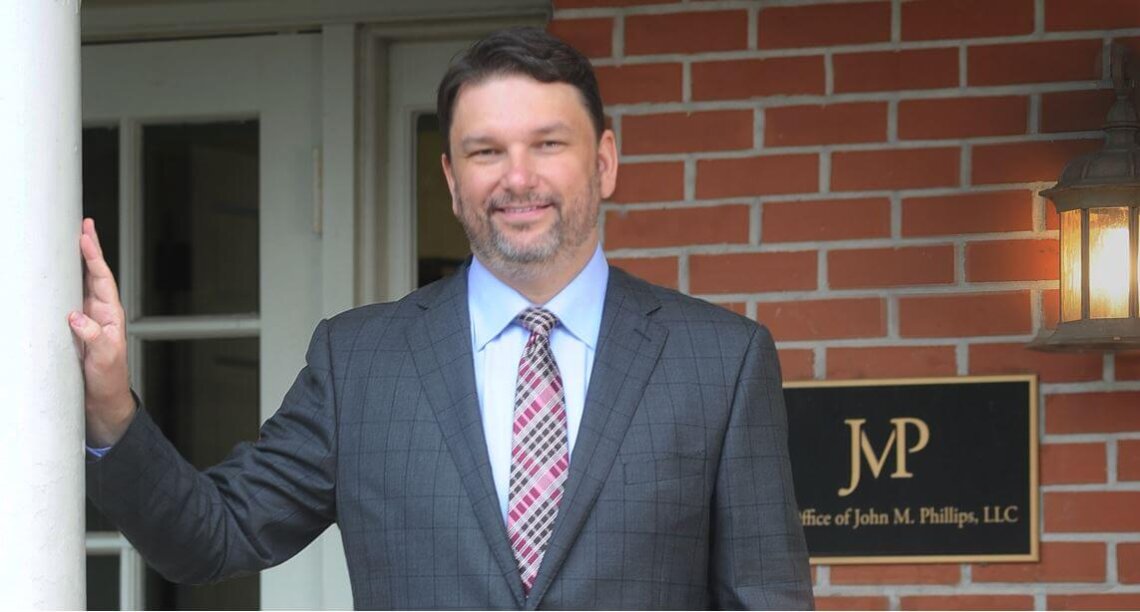 John M. Phillips A Walk in Someone Else’s Skin

As a young man, John M. Phillips remembers hearing stories about his grandfather and great-grandfather – a lawyer and judge, respectively, in Mississippi – and was inspired by their work. They went into all types of homes and accepted what people could pay, and let morality be their guide. Growing up in Alabama, Phillips found the character of Atticus Finch from Harper Lee’s “To Kill a Mockingbird” resonates well with the philosophy he strives to fulfill each day. He credits his grandfather, great-grandfather, Atticus Finch and his mother’s ability to tell a story as the reason he chose law and became a trial lawyer.

Coming out of law school, Phillips said finding a job was mostly about where he could get hired. Aft er a one-year judicial clerkship, he was presented an opportunity to work for an insurance defense firm. He spent eight years doing so, reaching named partner at Dore, Lanier & Phillips before eventually transitioning to representing victims while practicing with Morgan & Morgan. Phillips stated that the firm wasn’t for him in the sense that it was too big and not personal enough. He felt that the emphasis on quantity eventually outweighed the quality of the work he could perform, so he branched out and decided to open his own firm. Quotas, forced trial requirements and a constant focus on money shaped his first decade in the practice – a model he was determined to get away from. Phillips’ office now has a staff of about 14 people and feels as if he’s reached more of a pinnacle of his profession. His firm doesn’t even charge clients for postage and lawyers attend every client meeting.

Like Atticus, Phillips a family man, saying, “Being a lawyer is not all that I am; it is what I do.” In 2011, he lost his mother, only days aft er showing her sonogram photos of his soon-to-be first child, Bennett Busby Phillips. Bennett carries his mother, grandfather and great grandfather’s surname, Busby, and Bennett is Latin for “little blessed one.” Phillips’ wife and best friend, Angela, has stood by his side, planned charity events for the firm, been to court to sit with clients and helped keep their family balanced despite the immense growth in Phillips’ law practice since opening in 2011.

“You never really understand a person until you consider things from his point of view … until you climb into his skin and walk around in it.” This advice from Atticus Finch is well-received and accepted by Phillips. He quoted this in his recent TEDx Talk where he described growing up in Alabama, including several years in Monroeville where Harper Lee grew up and set her novel.

“We’ve all heard the saying about walking a mile in someone’s shoes,” Phillips said. “To walk in someone’s skin is a very diff erent issue, especially when it is a diff erent color than yours.”

Phillips became more aware of his skin in a recent case, which escalated him to a national stage. He represented the family of a young black teen shot and killed by a white man. The victim, Jordan Davis, was killed while sitting in his car listening to loud music. Loud music and the lack of benefit of the doubt and self control initiated a confrontation, which led Michael Dunn to open fire on the vehicle, resulting in Davis’ death. It was the first of several funerals Phillips would attend as a “family lawyer.”

Ultimately, Dunn was convicted, the family received a fairly unprecedented civil settlement from both Dunn’s auto carrier and one from the family’s uninsured motorist carrier and more importantly, Jordan Davis became part of a national conversation about race and equality. The case was the subject of two documentaries. “3 ½ Minutes, 10 Bullets” delves into the details of Davis’ life and death and the murder trial of Dunn. It was on the Academy Award’s shortlist for Best Documentary. “Armor of Light” premiered at Tribeca and talks about the movement Jordan caused, including amongst Phillips’ family. Phillips noted that the level of loss and love that he experienced during the span of those few months allowed him to better understand the loss the Davis family felt.

“Unless you are a parent who has lost a child, it is still impossible to truly walk around in someone’s skin,” he said.

One thing clients see in Phillips is he understands that a monetary recovery isn’t the only goal. He recently brought a claim against the Department of Motor Vehicles aft er it kept producing tragic mistakes on licenses. A legally blind man, Andrew Flaherty, moved to Florida and went to the tax collector’s office to obtain a state identification card. While there, he asked to be registered as an organ donor. Instead of organ donor, the innocuous looking number “943.0435” was typed on his license. When Flaherty later tried to access entry to the base at NAS Jacksonville with his brother, he was threatened and detained, as that code wrongly indicated he was a registered sex off ender. The same thing happened to an Orlando mother who had “sexual predator” printed on her license. Aft er filing suit in the first case, Phillips put a foot down and demanded the DMV change the system within 10 days to prevent more “Scarlet lettering” of innocent Florida residents. The state complied and admitted that this had happened to over 200 people. He was able to secure a settlement for Flaherty’s family and the state portal now has protections to make sure no one is accidentally labeled as a sexual off ender ever again.

“We made our name taking cases others wouldn’t,” Phillips said. “Flaherty approached one of the advertising personal injury firms before he came to us. We seem to do more with less, as we aren’t confined to looking at cases as inventory or based on a profit motive.”

Phillips will soon be featured on ABC’s “20/20” based on another case which reached unchartered territory. It also showcased Phillips’ devotion to protecting his clients and the people in his community. A Jacksonville mother posted photos of her daughter’s mouth on social media, depicting a dental appointment where her daughter was only supposed to have work done on one tooth and was now missing eight teeth. The girl’s mouth was bleeding, her forehead was bruised and she was disoriented aft er the unconsented procedures and rushed to the emergency room. She was one of several victims of a pediatric dentist who was alleged to perform myriad unnecessary procedures and who has since been charged with multiple counts of Medicaid fraud.

Phillips ended up representing 104 children. Most of the victims were on Medicaid and many others had varying disabilities. Ultimately, the dentist was forced to retire and was arrested. And, although Phillips couldn’t talk about the specifics of some, he helped the families obtain justice and “amicably resolved” 104 cases of dental malpractice in less than a year.

He didn’t stop there. Every year, Phillips’ office hosts a Toys for Tots fundraiser. Phillips wanted to do something extraordinary to make it a little more special for the 104 children he represented. He had 20 tons of snow delivered to his law office’s front lawn and shaped it into a snow slide. Many of the 104 children he represented in the dental malpractice case, as well as his own two children – who had never seen snow before – were able to play together.

“Seeing those smiles – even though many were toothless – was special,” Phillips recounted. Phillips has a unique perspective of his service as a personal injury attorney in the respect of defining the words he fights for everyday – justice.

“Justice is spelled one way,” he explains, “but it is defined many different ways and is different to every family, every victim. Our goal isn’t just financial recovery; it is justice by every measure we can find. Even in the simple car accident case, people can be treated better.”

Future of the Law Offices of John M. Phillips

“There is always someone that needs help,” Phillips explained. His firm has evolved from his specialty of personal injury to add criminal defense and family law. Phillips knows that in order to stay on top of the ever-changing field of law, he must adapt to where the clients in need are. While he still specializes in personal injury and wrongful death cases and became one of the youngest lawyers in the area to be board certified in civil trial law, his office has grown to what he calls a “specialized, general practice” of law.

Phillips admittedly stole a line from Harper Lee, paraphrasing, “We make sure our family and firm know that there is only one type of folks in this world – ‘folks.’ Race, religion, sexual orientation, ability to pay, socioeconomic factors and the like don’t decide who we can help. Our ability to tell their stories decides who we help.”

“We also help other lawyers tell their stories,” Phillips continued. “Between the speeches, documentaries and trials, it is a busy life. Our goal is to keep telling stories.” He was also recently appointed by Jacksonville’s Mayor to the Human Rights Commission, where he serves as a voluntary commissioner and stated that he was following in the footsteps of his mother’s father and grandfather. He also has photos of them hanging above his desk.

“If it is a sin to kill a mockingbird because they sing their hearts out for us and leave the world better,” Phillips suggested, “maybe we can emulate that. We can tell stories and fight for those who need help and leave the world in a little better place than we found it. Even if we fail, we sang the best song we could sing.”