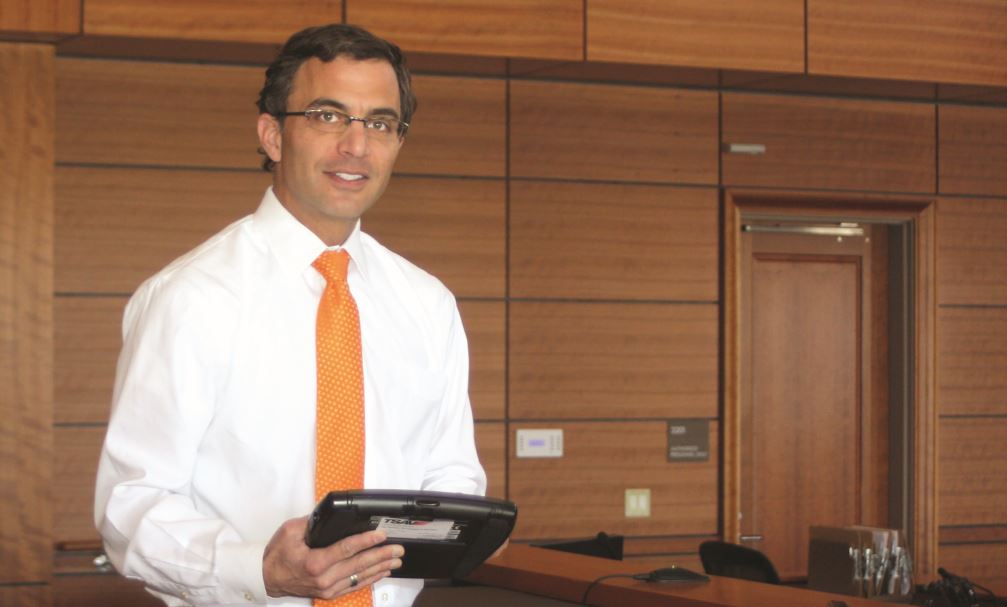 It was shortly after 3 p.m. when Allen Baddour climbed out of a steaming shower to see a flurry of texts and missed calls.

“Are you okay? Have you heard the news?” the messages said.

Baddour wondered what they were talking about. He had checked in with his wife, Holly, and their sons, Henry and Jack, who were still a few blocks over at a friend’s house. He had gone for a long run earlier in the day.

“What news?” he started texting back, while also going online.

Homebody North Carolina Resident Court Judge Allen Baddour has not strayed far from family and Chapel Hill in Orange County where he was born and raised.

He earned an undergraduate degree in political science from UNC and his Juris Doctor at UNC School of Law.

Baddour practiced in Chapel Hill for several years before joining the Chatham County DA’s office as the managing assistant district attorney under DA Carl Fox. In 2006, Baddour was appointed as a superior court judge for Judicial District 15B which includes Chatham and Orange Counties.

His office is next door to senior resident superior court Judge Carl Fox in the new Chatham County Courthouse in Pittsboro. Baddour had a hand in designing the courthouse that opened in 2011. “We sought the input of clerks, district attorneys, public defenders, the private defense bar and probation officers as to how to design the building and improve efficiency,” he said.

Topping his wish list for the new courthouse was technology. “The technology enhances the trial process and improves our efficiency. I find that the jurors like it when it is used well. It helps bolster a case,” Baddour explained. “I can activate the system in stages, so that the computer screen can show up first for the attorneys, then the witness, and finally publish it to the jury when appropriate.”

“I find working with juries to be fascinating and rewarding,” said Baddour. “Time and time again I’ll talk to jurors who clearly did not want to be there when they showed up but leave the process feeling really good about our system of justice. It’s such a bedrock part of our way of life.”

After a trial, Baddour often answers questions about the process jurors just participated in. He then follows up with an online survey of the former jurors. “I ask them what they thought about the process; everything from the procedural process to how I did, how the lawyers did, if they felt like any innovative trial techniques were used and if so were they helpful to the jury?”

Some of the feedback Baddour gets from the survey is about the lawyers. “This lawyer did a great job and was well-prepared and it showed, or the opposite, expressing frustration with lawyers that wasted time or weren’t prepared.” These elements of the practice of law strike at the heart of the professionalism Baddour values.

He is president of the Susie Sharp Inn of Court, a group of judges, attorneys and law school students who meet to discuss professionalism. “The benchmarks are integrity, candor with the court and opposing counsel, making a good faith effort to work with the other attorney and preparedness for a hearing or a trial.”

In Chatham County, Baddour is working on a pilot program that is actively pursuing “a smarter sentencing approach that is more evidence-based. There are times when people are put on probation and the judge’s tendency is to require them do a variety of things like get a GED, do substance abuse counseling, do community service and do parenting classes, and on and on.

“The problem is, when you load somebody up like that, it criminalizes their failure to do those things. Two or three of those things might be good hooks to get someone on the right side of the law,” he explained.

Living in the Present Playing basketball was one of Baddour’s passions while growing up. He coached Parks & Rec and YMCA basketball teams for about 25 years and is now a member of the board of the YMCA of the Triangle. “The Y does a great job providing an outlet for fitness, sportsmanship, and personal growth – individually and, importantly, as a family,” he explained.

Distance running is another of his interests that blossomed after college. He ran a marathon or two, but more dedicated running was placed on hold until about five years ago by which time he was serving as a judge.

“Being a judge and being a marathon runner are pretty solitary endeavors but the camaraderie and the ability to easily talk with a fellow runner about running or a fellow judge about judging is incredibly similar. I didn’t expect to make such good friends in either arena and I think I have because of that shared experience and passion.”

Baddour has competed in over 20 marathons. He placed ninth out of over 6,000 runners in this May’s Tar Heel 10 Miler in Chapel Hill.

“I really like training for marathons and the race itself is a nice bonus. I think the training is good for the mind, the body and the spirit. It helps me focus and relax. It’s a way to challenge myself,” he said. “I think in some way my running has inspired my family to be more active. My wife is now a long-distance walker. My kids run 5Ks. It’s a really great thing.”

At a little after 3 p.m. Baddour climbed out of the shower to see all those messages on his cellphone. He had run the Boston Marathon earlier that day.

“The bombings left me shocked, and grief stricken for those who were injured or killed, but also offered the opportunity for reflection, which allowed me to be grateful for the gift of family and friends,” said Baddour. “Things can change in an instant, so living in the present with gratitude is important.”