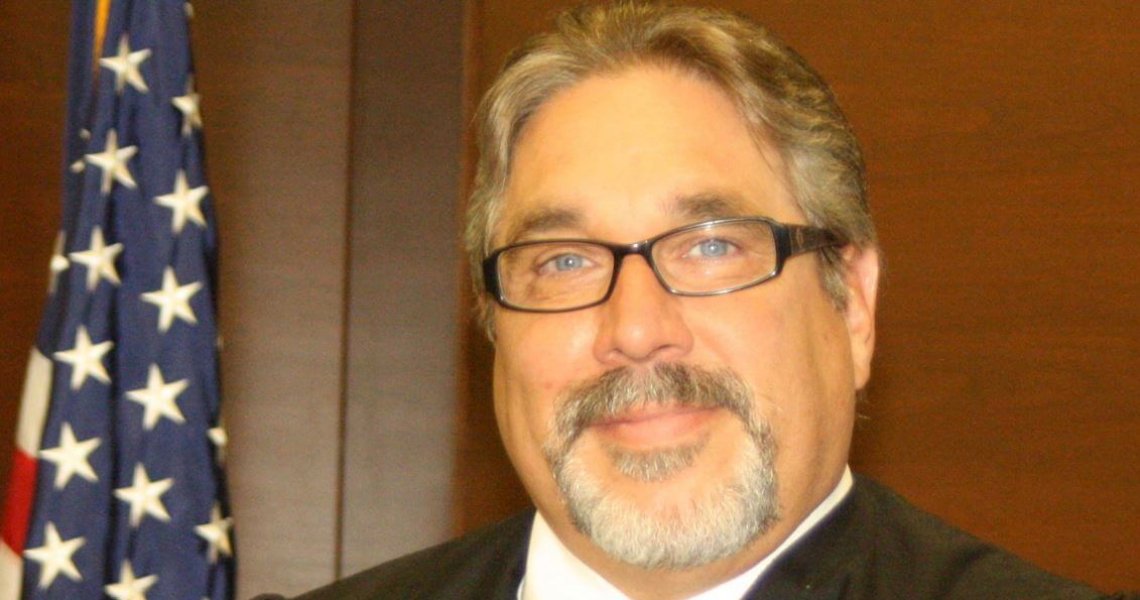 Fred S. Battaglia, Jr. was elected as a district court judge for Durham County in 2014 and sworn in January 2015. In July, I was able to get a close-up look at an attorney transitioning from private practice to the bench.

District Court Judge Fred Battaglia Jr. pointed to Trabia, a small town east of Palermo, Sicily on the map in his his office. It’s where his family originally came from. “My great-grandparents came over in a boat. It took 30 days and there were a lot of hardships,” he said. “I have great grandparents I’ve never met but I owe them a debt I can never repay because they left everything to come over here.”

Because Sicily is very poor, Battaglia said he feels a connection and a desire to help “the poor, the underserved and the underdogs” in Durham County. During his 29 years in private practice, Battaglia advocated for that segment of the population.

Battaglia is drawing on his Sicilian family’s values and those he has learned in life as he embraces the challenges and responsibilities of being a judge.

“I do believe in old-fashioned values of working hard and playing hard,” he said. “Visits to my farm on the weekend keep me grounded. I try to stay close to the soil. I think having outside interests other than the law is important.”

Battaglia is a man of faith. He has been involved with the Immaculate Conception Catholic Church in Durham for years.

“Faith is important to me,” he said. “I don’t believe in opening court with prayer and I don’t preach to people but I think it’s been a great help to me. The wisdom of Solomon is as important today as it was 2,000 years ago when he asked for an understanding heart and the difference between right and wrong and that’s as simple as it can get.”

When Battaglia went off to law school at NCCU, Solomon was not his role model. “My goal in law school was to graduate last in my class as did F. Lee Bailey when he was in law school,” he said. “But I messed up my GPA by getting an A in civil rights.”

Bailey was a criminal defense attorney in cases involving the Boston Strangler, Patty Hearst and he was on O.J. Simpson’s defense team.

“Bailey was an excellent cross-examiner. He did a great job cross-examining someone with the expertise of communicating with the jury at the same time.”

Battaglia followed Bailey’s road into the courtroom. Much of his career in private practice was spent in court handling everything from traffic and criminal cases to personal injury cases.

Battaglia was elected President of the Durham County Bar Association in June where he has been a fixture for years. At bar events, he is gregarious and laughs out loud as he chats up colleagues.

Back in his judge’s chambers, the black robe hanging on the back of his door, he is contemplative and humble, shouldering to the role and responsibility of being a jurist.

“Everything from the time I get up, to when I eat, to reflecting on things has changed. I have to make a judgment so everything in my perspective has changed as to the law,” he said. “To say that I don’t go home and ask myself, why did I rule that way, would be an understatement.”

Make no mistake about it, Fred Battaglia loves being a judge. He repeatedly mentions how much he is enjoying the job and how honored he is to have been elected. At the same time, he is adjusting to certain changes.

“Being a lawyer, I was very into collaborativeness,” he said. “I would talk to lawyers; I would talk to whoever about a situation and keep talking about it. As a judge, it’s more restrictive. While I do talk to other judges, it’s very different.

“I really enjoyed my clients,” he continued. “They were family to me. I do miss not having any clients. When you represent someone, you have control of the direction of the case. It’s a very different view from the bench. You don’t have the luxury of spending time together with a client. When you are a judge, you have to bring resolution to a case as a stranger. I urge everyone to try to put aside their differences to come to a mutual understanding through negotiation. It may not be the best solution, but it’s a solution.”

“You analyze everything about yourself now as a judge because what you do affects people,” said Battaglia.

“I don’t have a judicial philosophy yet,” he said. “I’m too new. But I’ve read other judicial philosophies and the one I like is to strive to convict the guilty, free the innocent and hopefully place the child with the right parent. The cases that keep me tossing and turning at night are the ones that are related directly to children such as when I’m in family court or drug court.

“Sometimes my subconscious, the fact that I was an advocate for almost 29 years comes out,” he continued. “I realize I really don’t have to say a lot; I just have to render a judgment. I’ve asked other judges about how they overcame this subconscious thought process. They say it becomes less and less over time, so, I’m a work in progress.”

“My judicial philosophy right now is to go from the backdoor to the bench without falling down.” he laughs.

According to the judge, people told him he would question his decisions. “You wonder why you make decisions as a judge,” he said. “It has happened more frequently that I wanted. At home or in a quiet moment, I will ask myself why I made the decision I did. It’s an evolving process and I enjoy it. I’ve embraced this questioning of my decisions.”

As a judge, Battaglia has noticed a shift in the people around him. “Some try to treat me differently, but I don’t let them,” he said. “Sometimes they’ll call me judge, I will ignore them until they call me Fred.”

“It’s an honor to wear the robe,” he said. “I’ve always wanted to be a judge. There is an old saying that when you increase knowledge you increase sorrow. As a judge you have tremendous power to better a situation. Hopefully in the long term being a judge will make me a more compassionate person.”