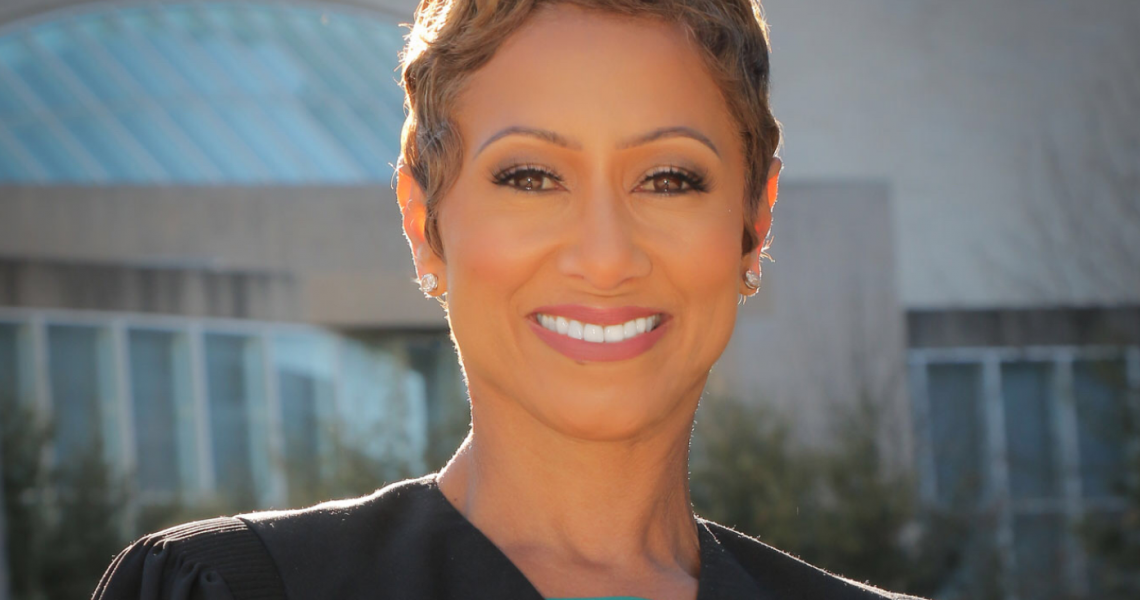 Attorney at Law Magazine Dallas publisher PJ Hines sat down with Judge Monica Purdy, an associate judge of the Civil District Courts, to discuss her career. Judge Purdy is responsible for seven of the 13 district courts. She oversees jury and bench trials, injunctions, temporary restraining orders and discovery disputes. She was unanimously selected for her bench by a merit panel, consisting of the 13 elected Civil Court District judges in February 2013.

MP: I preside as an associate judge of the Civil District Courts. I am responsible for 7 of the 13 District Courts. I handle multiple day-to-day judicial tasks, which include both jury and bench trials, injunctions, temporary restraining orders, presiding over motions, and discovery disputes. I was unanimously selected by a merit panel in February 2013, consisting of all the then presiding thirteen elected Civil Court District Judges.

MP: My transition from my career as an attorney to judge was prompted by my desire to accommodate the needs of my growing family. I began my legal career at a national law firm rising to the ranks of partner and wanted a better work-life balance with two small children and a husband. I love the practice of law and the opportunities it has afforded, but I also wanted to have time to enjoy my family. Professionally, I knew at some point I wanted to become a judge, so when I left my law firm practice to achieve that balance, I served as local counsel for several law firms. After less than a year of being in my own practice, I had the unique opportunity to become an associate municipal court judge for the City of Dallas which allowed me to maintain my private practice. Within three years of serving in that role, I pursued my passion and became an associate judge for the Civil District Courts. I have served in this role for the past seven years.

MP: My style in the courtroom is attention to the issues, patience and respect for all the parties, and of course being prepared. One of the best pieces of advice that I received before taking the bench is to rule. You know more about the case before you at the time of the hearing then you will ever know about the case once the parties leave your courtroom. If you aren’t ruling because you are afraid of being wrong, then you will never rule. A ruling helps the parties to move their case along. You owe it to the parties that have taken the time and energy to properly prepare the case before you; not ruling slows down the process and has a domino effect on all aspects of the parties’ case. Thus, I do my best to make a thoughtful, reasoned decision based upon the evidence before me and move on to my next case.

AALM: How did you decide to become an attorney?

MP: I decided to become an attorney in the sixth grade. We had a close family friend who was a lawyer and neighbor. He was kind enough to introduce me to the practice of law. I spent summers working in his law office and accompanying him to court. I knew I wanted to advocate for those who could not advocate for themselves, and I ultimately wanted to be a part of a profession that trained you to figure things out and to get results. Lawyers are change agents, lawyers are leaders in their communities, and they are trained to solve problems. I wanted to be a part of a profession that represented all these things.

MP: What I love most about my job is that no two days are alike. It can be exciting, difficult, serious, challenging and rewarding. I appreciate the fact that this role allows me to draw upon my everyday experiences while remaining my authentic self.

MP: The biggest difference between practicing law and presiding as a judge is that you are no longer there to advocate on behalf of your client or advance his/her interests. Your job as a judge is to ensure that the parties obtain justice. A judge is responsible for presiding over her courtroom and ensuring a fair, neutral and balanced forum in which the parties may present their case. As a judge you are there to interpret the law, apply the law and seek a resolution.

AALM: Are there any challenges you believe need to be corrected in the legal community?

MP: I think that judges and lawyers must make a long-term commitment and play a meaningful role in correcting the impact of racial disparities in our courts and legal decisions. The most recent events of social injustice witnessed this summer must cease. Its longstanding history has existed for way too long and does absolutely nothing to move our country and legal system forward. It is time to collectively work together to find a solution. Lawyers are trained to get things done, courts ensure equity and I am hopeful there can and will be a real solution soon.

MP: I am very involved in the community. I believe the public’s trust should be paramount in our appointed and elected officials because ultimately this is who we work for. I have been involved in the community long before becoming a lawyer or a judge because my parents stressed the importance of being involved and giving back. This was the example set for me and one that I also feel is of the utmost importance that I set for my own children as well. I am involved in various boards and community service organizations on both a local and national level. I am passionate about educating the public about the importance of voting, and issues affecting justice and our courts.

MP: The biggest change in the future that I am looking forward to is to become the next judge of the 95th Civil District Court. I am currently the Democratic nominee and will head to the general election on November 3, 2020. With the support and votes of Dallas County voters, I am looking forward to becoming the next elected judge which will give me the autonomy to create policy and procedures that I have been able to hone from my years as an associate judge in order to ensure an effective and efficiently run court.