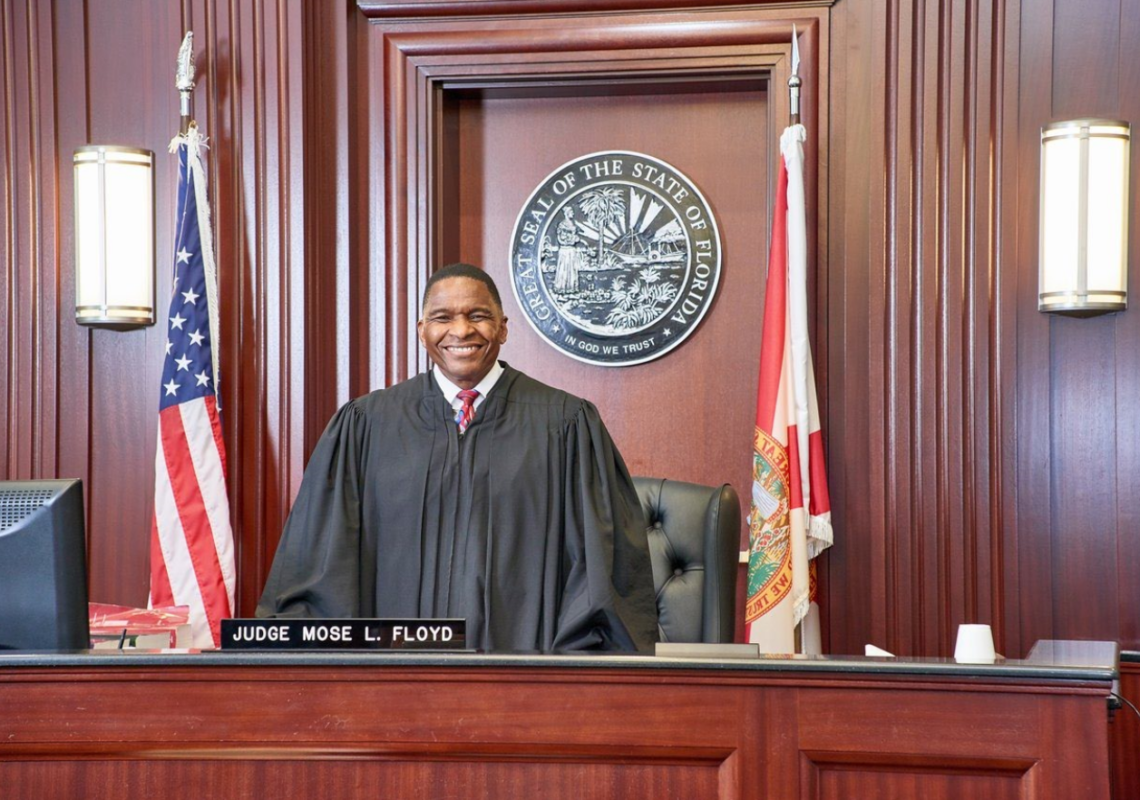 Duval County Court Judge Mose Floyd has served both overseas and in the courtroom. His dedication to country and community stems in part from his childhood experiences. “My father had no formal education but taught himself several trades and did what he had to do to support a family of 12 kids,” he said. “I’ve always felt an obligation to pay back, to give to those who aren’t as fortunate as myself.”

After attending the U.S. Naval Academy, Judge Floyd served as an officer in the Marine Corps from 1977 to 1999 and retired as a Lieutenant Colonel. Among his several military awards, one of his three Meritorious Service Medals was the result of Judge Floyd’s instrumental leadership in the modernization of the Marine Corps’ ground weapons and equipment.

“My leadership style has always been to lead by example, be supportive of those who I lead, and inspire them to be their better selves,” he said. “I’d much rather lead those who genuinely want to do the work and want to support me as their leader.”

After retiring from the Marine Corps, Judge Floyd transferred his leadership style to the courtroom. His decision to become a prosecutor was influenced both by his own experiences and by former Marine and State Attorney Harry L. Shorstein.

“I always harken back to where I was raised in the south as a young black kid where I noticed that many who looked like me weren’t getting the same breaks as others in the justice system,” he said. “Those who were underprivileged didn’t get the same advantages as those who could afford the better attorneys when they came to court, and I wanted to try to level the playing field and ensure equal justice.”

Although initially planning to become a defense attorney, it was Mr. Shorstein who convinced Judge Floyd to become a prosecutor. “Mr. Shorstein explained that I could do so much more to achieve equal justice by being a prosecutor because I would be dealing with a larger number of cases and I’d be making very important decisions up front including what the charges would be (if any), what sentence to seek, what bond recommendations to make, and the ability to ensure that the police officers involved with the cases were doing the right thing,” he said. “Mr. Shorstein won me over and the rest is history; I didn’t make it out of his office.”
Judge Floyd’s hard work and meticulous attention to detail allowed him to become division chief before promotion to director of Duval County Court in the State Attorney’s Office; then managing attorney for the St. Augustine State Attorney’s Office.

“I peeled back every layer of the onion and made sure that no one knew more about what was going on with a case than I did,” he said. “I did my research, went to the crime scenes, visited with officers and I was very rarely surprised in court.”

These efforts resulted in a 96% conviction rate in his felony trials.

One of his proudest achievements as judge has been the Veterans Treatment Court (VTC), which has connected his military and legal careers in a meaningful way. The program allows veterans who have committed a crime due to PTSD, injury, or addiction brought on by the stress of war and the rigorous demands of military life to enroll in a yearlong rehabilitation program with mentors. “I try to get them back to the mental state they were in when they were defending our country and protecting their families and communities,” he said. “Some of them have been on drugs for so long that they’ve forgotten what that was like. I try to remind them that they were establishing their legacies for their families to follow, and that if they wanted better for their family they have to stand up and be their role model and their rock.”

The VTC program has garnered positive reactions from both military and civilians. “The military really respects what we’re doing in VTC and when we make recommendations, they generally go along with us,” he said. “We’ve saved lives, salvaged careers, and restored families. That’s why I’m so proud about what we do in VTC.”

Today, Judge Floyd is looking forward to overcoming the challenges the courtroom has had to face in the midst of the COVID-19 pandemic. “That interpersonal relationship is something I miss most because I get a better sense of the people on both sides of the aisle in order to determine what is just in each case,” he said. “I’m looking forward to retrieving those interpersonal relationships and getting out of this Zoom environment.”

In the meantime, he continues to live by values inspired by the Marine Corps and his legal hero Harry L. Shorstein. “Mr. Shorstein’s only instruction to us was to do the right thing for the case, never throw low blows in court, and be a man of your word,” he said. “Even when doing the right thing means hurting your case, you still do the right thing.”