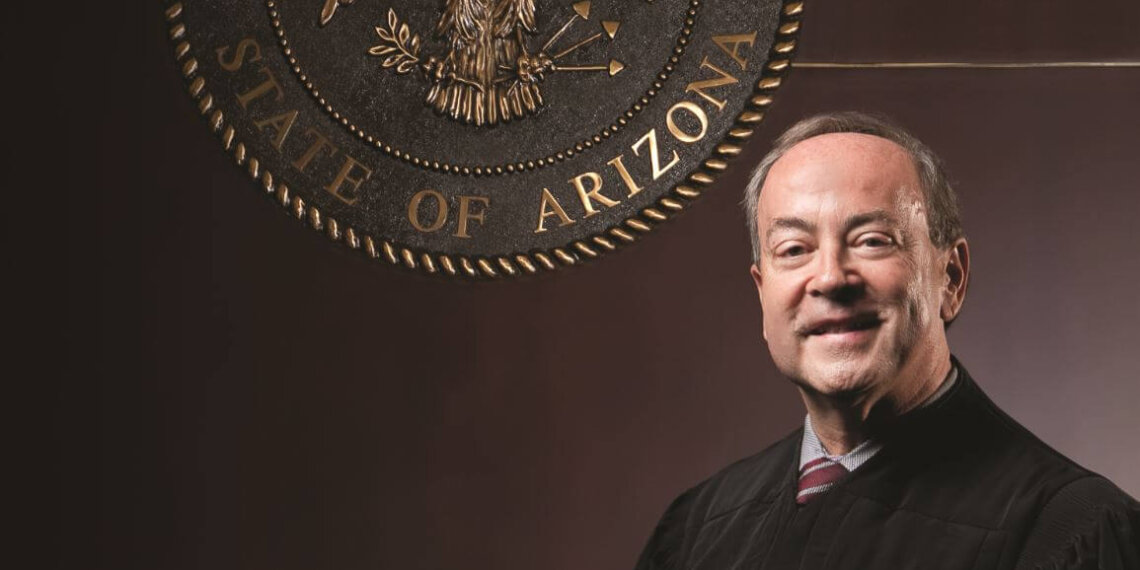 Attorney at Law Magazine Publisher Charlie Douglass sat down with Justice Clint Bolick to discuss what he hopes to accomplish in his judicial role.

Bolick: From a young age, I planned to be a schoolteacher and go into politics. During college, I interned in an inner-city high school and was shocked at the chaos and poor quality of education. I also interned one summer on Capitol Hill for then-freshman Sen. Orrin Hatch. Although I admired Sen. Hatch, I learned that politics is not a congenial environment for an idealist. Around that same time, I took a two-semester course in constitutional law. Cases like Brown v. Board of Education were an epiphany. Here was a way to change the world in a positive way while being faithful to ideals. So I decided in my senior year of college that I would be a constitutional lawyer. Luckily, no one told me that the odds of getting to practice constitutional law are close to zero.

AALM: Tell us about your time with Institute for Justice. What was it like leading a case before the U.S. Supreme Court?

Bolick: The Institute for Justice was the culmination of a dream I shared with Chip Mellor, my first boss out of law school. We wanted to start a public-interest law firm that focused on principles, funded by individuals who shared those principles rather than being motivated by personal gain – a sort of libertarian ACLU. Fortunately, in 1991 we were able to open our doors, initially with four attorneys and three support staffers. Today it has grown to a staff of dozens, with offices around the country. It has had an enormous impact on American jurisprudence, winning key precedents in its core mission areas of school choice, freedom of enterprise, private property rights, and freedom of speech. My pride in cofounding IJ and leading its litigation team for its first 13 years goes beyond words.

Arguing before the U.S. Supreme Court is a sublime experience for a litigator – as close as a nerdy constitutional lawyer could ever get to playing a Super Bowl. The preparation that goes into developing cases that will end up in the Supremes takes years, and even then the odds of getting there are low. The argument takes months of preparation and practice. It is an absolute blast, even better if you win. Given that our court has a mandatory retirement age, perhaps I’ll have more opportunities to bring and argue cases before the U.S. Supreme Court.

Arguing before the U.S. Supreme Court is a sublime experience for a litigator – as close as a nerdy constitutional lawyer could ever get to playing a Super Bowl.

AALM: What was your first reaction when Gov. Ducey approached you about being a justice?

Bolick: The governor selects justices following merit selection, in which applicants go through a lengthy and challenging process and a commission chooses which candidates will go forward. In my nomination, I was one of seven candidates whose names were presented to the governor. The other six are distinguished judges on our Court of Appeals, so the competition was stiff. When the governor called to offer me the position, I accidentally hung up on him. Fortunately, he answered when I called back. I was excited and humbled by his appointment. Having never thought seriously about being a judge until applying for this position, it is still a situation where I ask myself most mornings whether it’s actually true that I’m on the Arizona Supreme Court.

AALM: What do you most hope to accomplish in your judicial role? In your position within the community?

Bolick: More than anything else, I’d like to have a role in developing the relatively young jurisprudence of our state Constitution. My overriding message in the community is that the Arizona Constitution embodies far greater protections of individual rights than our federal Constitution. Very few people are aware of the independent vitality of state constitutions, and few law students take courses in state constitutional law. Constitutional rights are mere verbiage unless lawyers invoke them and judges enforce them.

AALM: Tell us about your relationship with the other justices. How do you work together?

Bolick: The Arizona Supreme Court is a very collegial group. My colleagues are super smart, constructive, independent and patient. We work very hard collectively to reach the right conclusion in cases, but there is no pressure to conform. When we disagree, we do so in an agreeable way.

AALM: Tell us about your approach to adjudicating cases.

Bolick: I have a steep learning curve because there are many areas in which I’ve never practiced that come before the court. But the transition from advocacy to judging has been surprisingly easy. Any good litigator has to objectively size up a case before taking it on. Indeed, a litigator’s success depends heavily on honing that skill. That is precisely what a judge does. Like any judge, I bring my values and experiences to the task of judging cases, but most cases have an objectively correct outcome. It’s a matter of sifting through the law and facts with your able colleagues until you find it.

Bolick: Be prepared for questions. As a litigator and justice, I’ve never seen the Arizona Supreme Court go more than a minute or so before asking questions, and then they don’t stop. That’s lucky for the litigators because they find out what’s on the justices’ minds. The more they respond to our concerns, the greater their odds of success. Never overstate your case – that can be fatal – but be prepared with crisp, accurate answers.

AALM: What do you believe is the role of the Arizona Supreme Court? How do you hope to contribute?

Bolick: The Arizona Supreme Court provides the final word on interpretation of the state Constitution and statutes. While most of our review is discretionary, we must hear all death penalty appeals and many election cases. Most justices on the U.S. Supreme Court have extensive experience in constitutional law, but that is the exception on most state supreme courts. I hope my constitutional law experience will aid in the development of our jurisprudence, including the area of criminal law, in which most cases present issues of constitutional or statutory interpretation.

AALM: Tell us a little bit about the man behind the robe. What do you do in your spare time? Do you have any hobbies?

Bolick: I still have two kids at home, ages 11 and 14, as well as a young grandson and a granddaughter on the way, so most of my free time revolves around family. We travel extensively, with a trip to South Africa coming up. My wife is active in politics, and while my role is on the sidelines, it is a common interest. We love to hike and share a common passion for food and wine. We are both very active in the community, especially education. Arizona is a great place to call home and raise a family.

As a justice, I hope most to emulate Clarence Thomas, who also was a mentor early in my career when I worked for the U.S. Equal Employment Opportunity Commission.

Bolick: As a litigator, my role model was Thurgood Marshall. His long-term, systematic campaign to overturn separate but equal was an inspiration and also provided a brilliant playbook for litigation strategy. As a justice, I hope most to emulate Clarence Thomas, who also was a mentor early in my career when I worked for the U.S. Equal Employment Opportunity Commission. Although I sometimes disagree with his opinions, he is fastidious in tracing constitutional intent and in his fidelity to that intent. He also writes clearly and understandably. Both of those qualities are important in advancing the rule of law.