NC Supreme Court Justice Robin Hudson: “Where Do We Go From Here?” 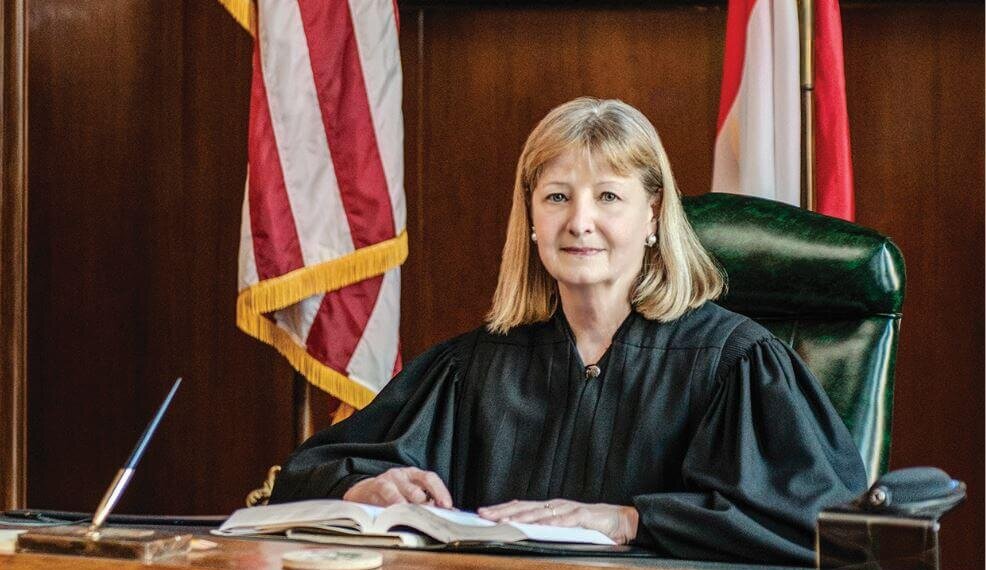 “The dust is still settling,” said North Carolina Supreme Court Justice Robin Hudson. Her primary election a year ago to retain her seat on the high court was described as a “maddening, harshly partisan race,” by the News and Observer and it sparked a national debate about campaign financing of judicial races.

Hudson had to part the red-state sea of money being spent on attack ads against her. The Washington, DCbased Republican State Leadership Committee, a conservative PAC partially funded by the Koch brothers spent $1 million trying to knock Hudson out of the primaries.

“I was the poster child for the attack ad last year,” said Hudson. Her statewide re-election campaign suddenly turned into a national story. “I started getting calls for the New York Times, The Wall Street Journal; and the Washington Post had an article about the race. I was interviewed by network TV and NPR affiliate stations.”

“Big groups out of Washington funded by big corporate entities had a national plan to spend money in states around the country on Supreme Court races in an attempt to build a firewall around their legislative agenda,” said Hudson. Supreme Court campaigns in Missouri, Montana and Tennessee were also targeted by conservative PACs.

“I’m encouraged that it didn’t work in North Carolina or any of the other states where they did that last year because they spent a lot more than any of the judges could raise. People did not respond positively to the attack ads on judges,” said Hudson.

In her remarks at her investiture in January of this year, Hudson said out-of-state PAC money in judicial elections is, “inconsistent with the oath that we take and what our job is which is to dispense justice without favoritism and to be fair and impartial. That means not bringing a political or personal agenda of any kind to the bench. It means being open minded and even handed.”

“I think we are at the crossroads and we have to be careful that we don’t allow the influence of outside money to affect the quality of our judges,” warned Hudson.

“Horrified and Outraged” Hudson who was first elected to the high court in 2006 when, “judicial elections were sleepy, boring affairs where it was difficult to get anyone to vote,” she said.

The 2014 primary was shaping up as another low-key contest between Hudson, a democrat, and Superior Court Judge Eric L. Levinson, a republican from Mecklenburg County.

Just days before the filing deadline for the primaries, republican Jeanette Doran, a former executive director and general counsel of the conservative North Carolina Institute for Constitutional Law joined the race.

The PAC Money Began to Pour in. “Ten days before the election, which was the first day of early voting, I got an email from one of my campaign people with a link to an attack ad that had started that day on TV that accused me of siding with child molesters.”

The TV ad labeled Hudson as “Not tough on child molesters. Not fair to victims.” The accusations stemmed from a 2010 Supreme Court ruling involving a convicted child molester who was required to wear a tracking device on his ankle under a law enacted after his conviction. “Three of us on the Supreme Court thought that didn’t do anything to protect children and was primarily punitive in effect and therefore an ex post facto law which violates the Constitution,” said Hudson.

“The spinmeisters turned that into I sided with child molesters which couldn’t be farther from the truth. I was horrified and outraged because it was so untrue and such a distortion,” said Hudson.

A Valuable Perspective Hudson’s victory in the 2014 election was partially the result of voter’s opposition to outside money in the campaign. It was also due in part to the relationship she had developed with North Carolinians crisscrossing the state as a practicing attorney representing textile workers suffering from cotton-dust related illnesses.

“I had a career for 25 years representing individuals; workers’ comp cases involving toxic exposures, workplace injuries, family law matters, personal injury cases as well as a lot of court-appointed criminal cases. I travelled a long way with a lot of people from different walks of life and I think that’s a valuable perspective I brought to the court of appeals and it’s a valuable perspective I bring here to the Supreme Court.”

When Hudson was elected to the North Carolina Court of Appeals in 2000, elections for appellate judge were partisan. Judges were not allowed to ask directly for contributions.

By 2004, elections for appellate judges were non-partisan. Judges could ask for contributions of up to $500 from registered North Carolina voters and 350 donors were required to qualify for public financing for the general election. “It was widely praised around the country as a model because it kept big money pretty much out of judicial politics,” said Hudson. Those rules were in effect when Hudson was first elected to the NC Supreme Court in 2006.

The Citizens United ruling in 2010 kicked the door open for public interest money in local, state and national elections, including judicial races like the one for Hudson’s seat last year.

“Bottom line, it didn’t work in North Carolina or a lot of other states which tells me people are getting wise to the negative ads that are very likely not true,” said Hudson. “I’ve heard from people all over the state that they saw the attack ad, knew it couldn’t possibly be true and made them so mad that they went out and voted for me and told everyone they knew to go out and do the same thing.”

After the barrage of ads aimed at Hudson in the primary, the general election only saw the attacks ads tweaked for YouTube and emailed to conservative voters in the state.

Hudson won the general election by a wide margin.

Where Do We Go From Here? “My biggest concern is that this will discourage good people from wanting to serve on the court because of the chance they may have to face something like that. It would be a very negative development for our court system.”

Hudson said the election is still very fresh in her mind.

“I still have a lot of thinking to do about what we learned in reflection and where we went and where we are going. I want to go back at some point when I have a sufficient distance on it and re-read all of the coverage on it and think what lessons have we learned and where do we go from here.”

“This is an enormous issue looming out there in the country. It does come down to, what do we want our judiciary to be like? The Constitution sets up this three branch system and the judges are designed to be impartial, not coming to the bench with an agenda. If you have people out there spending money to try to get judges who do have an agenda, we have a fundamental problem.”