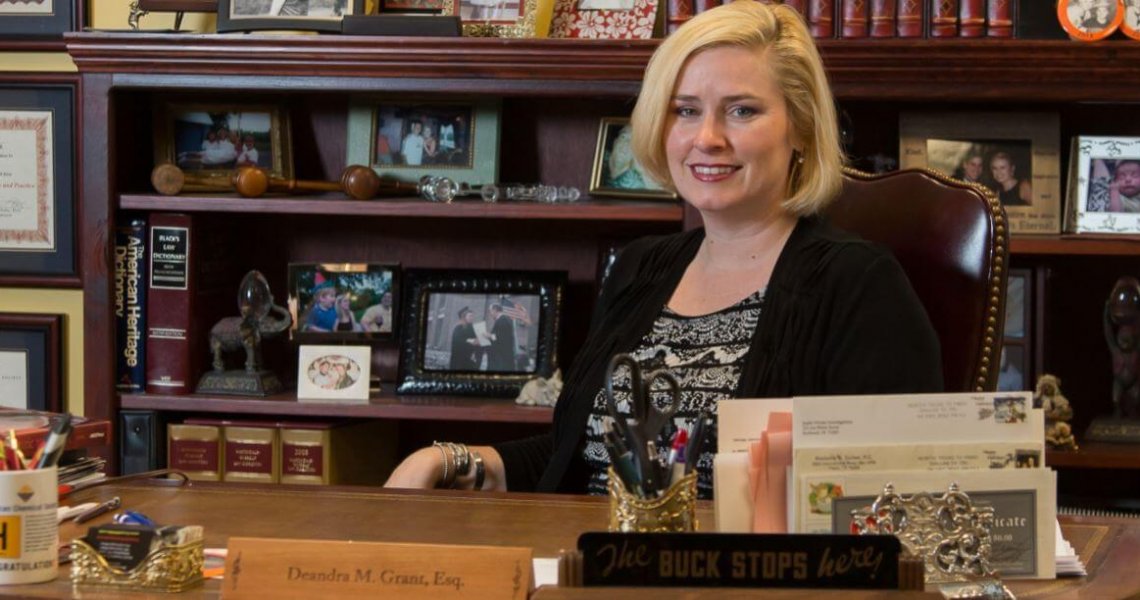 Deandra Grant describes herself as a criminal defense attorney, wife and mom from Dallas, Texas. She has carved these varied roles into a successful criminal defense practice. Grant was interested in the practice of law from an early age, and she had a legal career in mind when she graduated with her Bachelor of Science degree from Trinity University in San Antonio, Texas.

Grant worked as an intern for the Dallas County District Attorney’s Office while she attended law school at Southern Methodist University School of Law. After she graduated and passed the bar, she went on to work as an assistant district attorney. “It was a great learning experience and I had the opportunity to try a lot of cases and work with some terrific and talented people,” Grant said.

Grant left the district attorney’s office to begin her own criminal defense practice. Regarding DWI defense in particular, she reached two conclusions: First, there are a lot of individuals who need quality DWI representation. Second, she needed more scientific knowledge to master DWI defense. “I started learning as much as I could. My motivation was my desire to be the most effective advocate that I can be,” Grant recalled.

In 2004, Grant went to Florida to learn about breath-testing. At that time, Florida was using the same testing instrument as Texas. “I couldn’t get the same training in Texas, and I wanted to really understand how it worked,” Grant explained. Breath-testing was the focus in DWI cases at the time but, as technology has advanced, that focus has shifted to blood analysis. “I have always wanted to know as much or more about the science being testified about than any state expert. As a result, I have been very successful at cross-examining experts during my career.”

In 2008, Grant went to Georgia to take a course in forensic blood and urine testing for DWI cases. The world renowned scientist Dr. A.W. Jones was one of her instructors. She later attended a hands-on course in forensic gas chromatography at Axion Labs in Chicago in conjunction with the American Chemical Society. Gas chromatography is the method used in crime labs to determine the blood alcohol concentration in a blood sample. Her instructors included Dr. Lee Polite and the legendary Dr. Harold McNair.

Grant also attended a course on administering field sobriety tests. She has since become an instructor. She has taught seminars to attorneys and helped train them on the same techniques used by law enforcement to make arrest decisions in DWI investigations. Recently, she has moved into the area of drug recognition and the methods taught to officers to help them try and recognize signs of drug impairment.

DNA analysis now plays a pivotal role in many DWI cases. Grant explained, “It’s not unusual for people to be ejected from a car during an accident. As a result, we may have to analyze the evidence to determine who the driver of the car actually was. Often, people in accidents don’t know themselves whether they were driving or not. It’s becoming more and more common for prosecutors to test DNA on air bags to determine who was sitting in the driver’s seat.”

Grant recently represented a client in a case where the “biggest issue was whether or not my client’s DNA was on the air bag that deployed during the accident.” This kind of evolution in case analysis demonstrates how important it is for those involved in the process to understand the underlying science.

Grant works constantly to stay abreast of the science that is integral to criminal and DWI cases. She is currently pursuing her masters in forensic science at the University of Florida, College of Pharmacy. She uses her knowledge not only to defend her clients, but to educate others in the legal community. In addition to her trial practice, she is president of International Legal and Forensic Science Services, Inc., a firm dedicated to providing forensic training to attorneys. Grant also lectures throughout the country, presenting at judicial and legal seminars and serving as a guest lecturer at law schools.

“My friends and I often joke that so many of us went to law school because we didn’t want to go to medical school,” Grant said. “Now, we find we have to learn medical science in order to effectively represent our clients.”

Despite the demands of her law practice and busy travel schedule, Grant still finds time to be a wife and mom. “I have two kids and they keep me very grounded. It is a whole different ballgame for a female trial lawyer raising children. It is quite an adventure. I am fortunate to have a very supportive husband, parents and mother-in-law,” Grant said.

One of Grant’s proudest career achievements was finishing her book, “The Texas DWI Manual,” now a staple reference guide for the legal community. Grant was approached by her co-author, DWI attorney Kimberly Griffin Tucker and James Publishing to participate in a rewrite of a DWI book written in the 1990s. Grant was engaged to draft all of the scientific material for the book. “It was a major undertaking that took three years,” Grant said. “The book is intended to serve as a trial guide for lawyers who try DWI cases. The first supplement is due summer of 2014. We have made numerous additions, and we are receiving a lot of good feedback. Judges are using it, and many law schools are including it in their libraries.”

“Lawyers often hire me to serve as co-counsel to handle the scientific aspects of their cases,” Grant said. “Sometimes civil lawyers will consult with me on lawsuits where intoxication is an issue. I will work with them so that they can determine if someone was intoxicated or how reliable the medical or lab records are. It has created a new practice area that I did not have before.”

Technological advances coupled with television shows such as CSI have increased the expectations of jurors, as well. “As opposed to 15 years ago, I believe that jurors today expect there to be some forensic evidence presented in cases like these,” Grant said. “It may really complicate things for the prosecution if they don’t have it. On the other hand, defense attorneys also have to educate themselves on the science and ever-changing standards. My trial practice and strategy have changed greatly due to evolving science and technologies.”

Another major challenge in defending DWI cases arises from the lack of quality controls on the part of government run crime labs that process evidence. “I understand errors in testing, how alcohol works on the body and blood testing procedures. In many ways you have to become your own expert in order to look for potential problems with crime labs,” Grant said.

Questionable practices and compromised lab results have become such a problem that the issue has caught the attention of Congress, which ordered a special report on the matter several years ago. Grant opined that those working in crime labs often “think of themselves as part of law enforcement rather than as independent, neutral scientists,” even going so far as to be “more communicative with the prosecution. They don’t always have best practices and quality control standards, which leads to errors. There have been several scandals in Texas involving people who were prosecuted for fraudulent lab practices.”

As a recognized voice in the forensic community, Grant is currently writing an abstract for the American Chemical Society about another type of testing issue: it has become common practice in Texas for hospitals to subject accident victims to a standard plasma screening panel, which includes a test for blood alcohol. Such testing is, according to Grant, “not as reliable and is not the same as the forensic testing procedure for whole blood alcohol concentration (BAC). The government can subpoena these records to prosecute a DWI case. These tests can be as much as 100 percent wrong.”

In a recent case, the prosecution used the results of such a test to allege that her client’s BAC was .266. Grant educated the jury about the true scope of the testing procedure and demonstrated that the test result was likely erroneous. “The jury found my client not guilty after only about an hour of deliberation,” Grant said. “These tests were never intended for courtroom use.”

Grant is an advocate of responsible social drinking. “If I have a client that I think has a drinking problem, I am one of the first people there telling them that they need to get some help,” Grant said. “I have assisted many clients in their decision to enter rehab.”

As a service to her clients and to the public, Grant has developed a mobile app. It includes a chart based upon federal averages so a person may calculate their own BAC. “One of the biggest problems we have in society is that people are not very educated about alcohol,” Grant said. “They don’t always realize the effect it’s having on them and how much they are actually drinking.” According to Grant, one mistake that people commonly make is counting individual drinks rather than ounces. “They count containers, but the amount of liquor may vary by the glass.” The app also outlines DWI consequences in Texas and offers a link to call a cab.

Grant leads an exceptional legal team. Clay Graham maintains the office in Fort Worth and handles court appearances for Tarrant County. “He’s also a registered nurse,” Grant said. “We make a great team when we are working together on a case that involves significant scientific evidence. He’s also an expert at dealing with licensing boards. If someone who is licensed in a particular field is charged with DWI, he provides excellent representation in those hearings.”

Laura Buehner is a former Dallas city attorney. She handles municipal court matters as well as misdemeanor and felony cases in north Texas.

DWI is a crime with very significant consequences, and convictions are often based upon subjective findings. “The stakes are very high. A conviction has such a lasting impact on a person’s life,” Grant said. “A DWI conviction for someone in their 20s could ruin their chances for getting a job in their 40s. To be successful in representing cases that involve forensic science, you have to be educated. You cannot just wing it.”

Grant summed up her practice philosophy, “I have a bracelet that I wear every day that says, ‘What would Atticus do?’ It is, of course, referring to Atticus Finch. It doesn’t matter who a person is, or what they are accused of doing, everyone is entitled to quality representation. Not everyone who is arrested is guilty. There are a lot of people in prison who have been convicted based upon scientific testimony that turned out to be wrong because the person who testified didn’t have the qualifications to render a particular opinion. I just want to make sure that isn’t happening in any of my cases.”