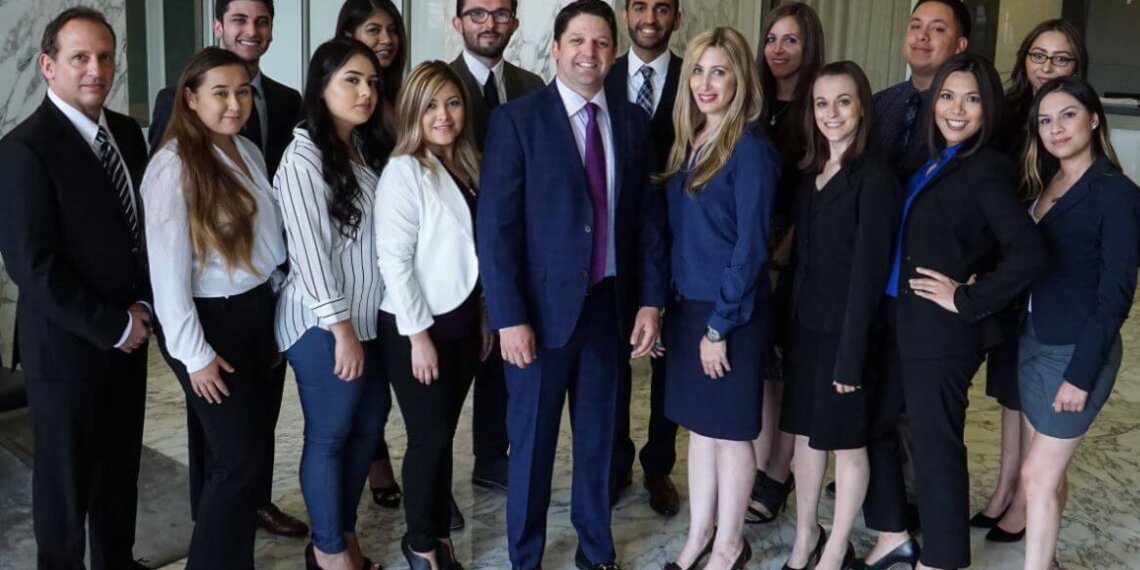 The Law Offices of Bradley S. Wallace PC: A Victor for the Victims

Walking into the personal-injury firm Law Offices of Bradley S. Wallace PC, one feels the presence of champions.

Lining the offices and hallways and perched on desks is a museum’s worth of sports memorabilia—autographed photos of special moments, equipment signed by superstars, commemorative displays and more—each piece with special meaning.

“My three favorites are a goalie mask signed by the entire 1980 Gold Medal winning U.S. Men’s Hockey Team (the “Miracle on Ice” team), a signed Sandy Koufax jersey and a signed canvas picture of Kobe Bryant standing on the scorer’s table at Staples Center after the Lakers Game 7 win against the Celtics to win the NBA Championship,” Bradley Wallace, the firm’s founder, says. “All of the pieces were obtained after a successful policy limit settlement at the firm.”

Though the firm has only been open for business since January 2016, Wallace is no rookie in the court of law or on the field of personal injury business.

“It was the natural progression of my legal career which, over the first 10 years of my practice, had been spent learning and growing from others both in and out of the courtroom,” he says. “I reached a point where it made sense to forge my own path and create a law practice built from my own vision.”

“I reached a point where it made sense to forge my own path and create a law practice built from my own vision.”

That vision: To create a new contingency-fee civil litigation practice firm that reflected his values and goals — a firm that utilized modern technologies and efficiencies while maintaining an old-school emphasis on client service and accessibility.

For the firm’s clients, that means a culture rooted in a strong belief in the justice system, particularly the Seventh Amendment’s guarantee to a right to a jury trial in civil cases. Wallace explains this right is what enables the average person in society to seek and obtain justice against insurance companies and government entities that have more resources than they do.

“I feel honored and humbled each time I am retained on a new case and I take the responsibility of representing people very seriously,” he says. “That ambition and sense of responsibility is what drives the firm every day and will continue to do so.”

Wallace doesn’t do it all alone. He calls his team of lawyers and staff an amazing mix of driven professionals, many of whom have been with him since the firm’s inception. The office’s paperless environment lends itself to a collaborative atmosphere where the office staff remains connected on all matters.

Behind these doors, it’s impossible to forget the team is there to win. They work in sight and earshot of three large flat screen TVs that are consistently tuned to sporting events throughout the day. The state-of-the-art office also includes a mock-jury conference room that is equipped with audio and video capabilities, enabling the attorneys to run focus groups on all of its cases, including case framing and witness preparation for trial.

“The office environment, both for the staff and for clients and referring attorneys that visit, is a very important aspect of the firm,” says Wallace, whose strong interest in law and government, as well as an outgoing personality and penchant for being argumentative and questioning authority, drew him at an early age to law and the courtroom.

Apparently it’s getting more so. In nearly three years, the firm has expanded its office space twice and added attorneys and staff at a “significant rate,” with business growing tremendously overall. Balancing his practice with running the business is a challenge he finds “invigorating and exciting every day.”

Wallace credits the firm’s evolution to its relationships with its referring attorneys and law firms.

“Once they see our level of legal work and professionalism, as well as the results achieved on cases they have referred to our firm, these attorneys have steadily increased the number of cases they are referring to us,” Wallace says.

Staying active in the community helps get business, too, and for that no one gets to sit on the bench. Every member of the firm, including attorneys and staff, is a member of CAALA (Consumer Attorneys Association of Los Angeles), the nation’s largest association of plaintiffs’ attorneys. He and his team have formed strong relationships with fellow members from other plaintiff firms and regularly attend the organization’s educational and social events.

Further, Wallace is a member of the Board of Directors for the Los Angeles Trial Lawyers’ Charities, a non-profit founded and run by plaintiff trial attorneys committed to giving back to the greater Los Angeles community, and his team regularly volunteers at LATLC events.

“I am a big believer in having my entire staff aware of the bigger picture of what we do and understanding the impact that consumer advocacy has in our society,” Wallace says.

The firm is flexing its advocacy muscle these days in several high-profile cases. Wallace regularly handles injury cases against celebrity defendants and has several active cases being covered by TMZ.

In addition, the Law Offices of Bradley S. Wallace PC was recently retained by many victims of the Sylmar Creek Fire and is prosecuting the case against the City of Los Angeles Department of Water and Power for its role in causing that devastating fire.

“With the recent outbreak of wildfires across California, I am excited that our firm is positioned to be at the forefront of representing victims of wildfires for the foreseeable future,” Wallace says.

His cases might be getting larger, but Wallace’s commitment to turning victims into winners hasn’t waivered.

“My practice has always been focused exclusively on representing individuals who have suffered harm and need a voice,” he says, “And that will remain my focus for the entirety of my career.”