Lawrence Whittaker: Working Harder To Be The Best 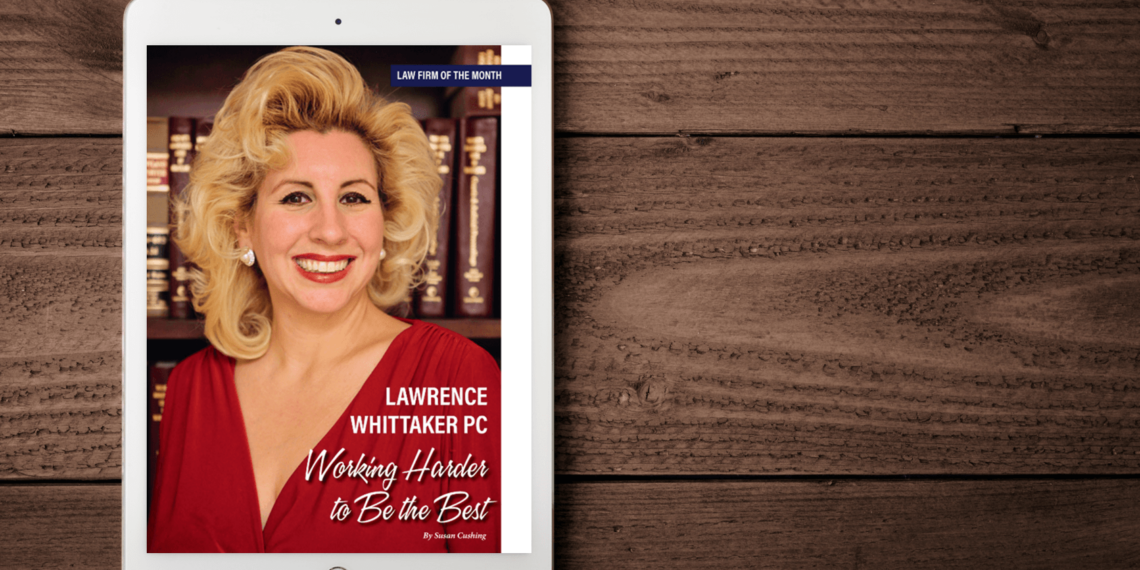 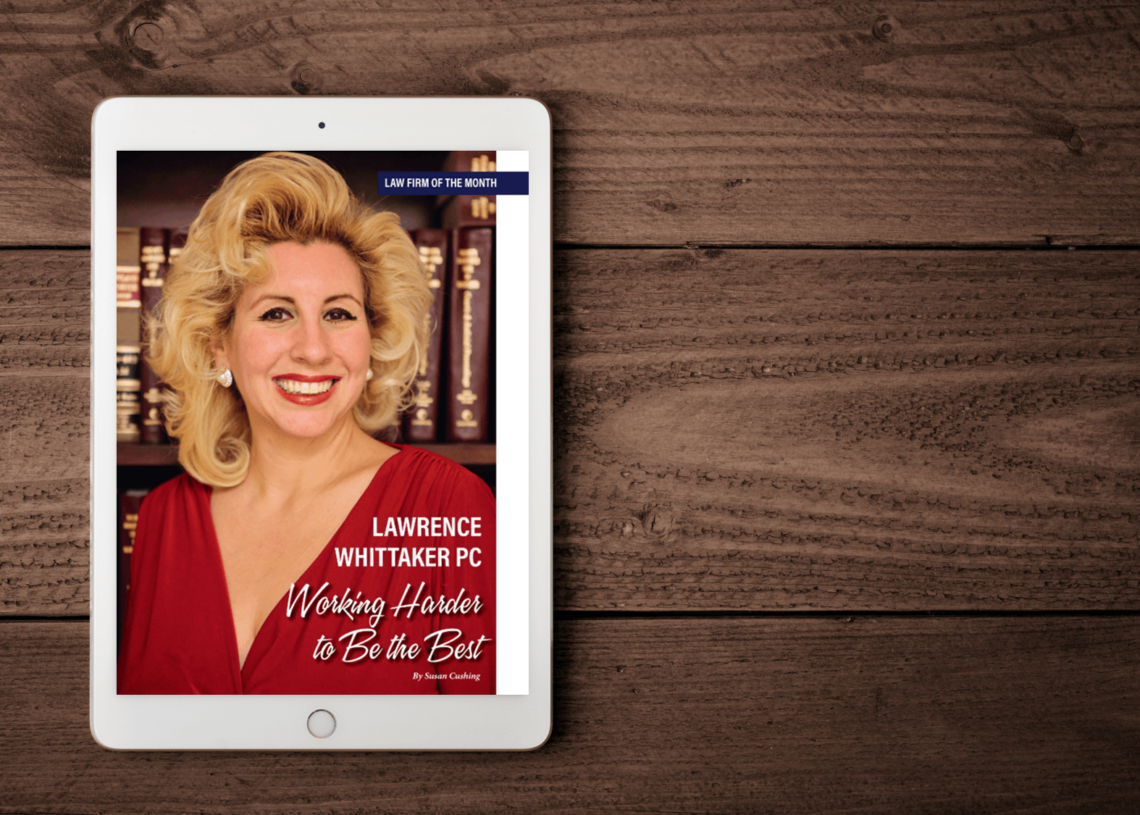 In a career spanning nearly two decades, Lorraine Lawrence-Whittaker has not only established one of the most dynamic and respected trial and litigation firms in Maryland, but also a reputation as the go-to hired gun for other attorneys seeking a true superstar litigator. As founder and managing partner of Lawrence Whittaker PC, she heads up a group of highly skilled and dedicated professionals concentrating in the areas of family law, business litigation, estates and trusts litigation, personal injury and criminal defense.

This award-winning firm has been recognized by the American Institute of Family Law Attorneys as one of the Top 10 firms for client satisfaction, “recognizing excellence … allowing clients to make wise decisions.”

Currently, an all-female firm, Lawrence- Whittaker says, “That was not necessarily by design. It’s not something we planned; it just worked out that way. But, we are a great, cohesive team, supporting and helping each other and really consider ourselves friends as well as colleagues.”

Lawrence-Whittaker’s legal career began with a jumpstart, three rungs up the proverbial ladder, as an associate with the prestigious plaintiff’s firm of Snyder, Weiner, Weltchek, Vogelstein & Brown. A “newbie,” fresh out of law school, she shined as a member of the legal team that secured a $185 million professional negligence settlement from Ernst & Young LLP. She also was the primary associate on a products liability case against Bristol Myers, helping to secure the largest compensatory breast implant award on record in the United States.

After leaving Snyder, Weiner, Weltcheck, she joined Portner & Shure PA. “Probably the biggest PI firm in the state, now,” says Lawrence-Whittaker. “I did a lot of PI, criminal law and a little family law. I wanted to be trying cases and was given ample opportunities.”

Landing such plum positions right out of school requires intellect, skill and, according to Lawrence-Whittaker, a little luck. She credits an unexpected, temporary career in journalism for providing that last element.

While summer clerking jobs are probably the most common options for law students hoping to land a spot after graduation, Lawrence-Whittaker’s path was one that proves the power of the pen. While attending Duquesne University School of Law, she served as managing editor of Juris, the ABA’s top law school magazine. After graduating, while waiting to take the bar exam, Lawrence-Whittaker worked as a legal reporter for The Daily Record in Baltimore, also serving as its editor of the Family Law Journal and Business Law Journal.

“Becoming a journalist was not something I’d ever intended,” she says. “Quite simply, I needed a job. It turned out to be not only something I really enjoyed, but it proved to be quite advantageous to my career. It was a lot of fun working with such a young bullpen; plus, I was coming to a legal market where I didn’t know anyone and these positions opened many doors for me.”

An astute and gifted writer, Lawrence- Whittaker’s work earned her various journalism awards as well as a bit of name recognition, particularly within the legal community.

For Lawrence-Whittaker, the “School of Hard Knocks” was quite literal. Two serious accidents during college delayed graduation by two years. The resulting injuries, particularly the second, could have ended her legal career (not to mention her life) before it even began.

Becoming a lawyer was something Lawrence- Whittaker had dreamt about since the second grade. “I was quite definite about that,” she says, “but I’m also pragmatic. By the time I graduated from high school in 1988, there was a glut of attorneys, so I opted for Plan B.”

Particularly strong in mathematics, her Plan B was to attend Allegany College of Pennsylvania to earn a math degree before going to Columbia University to earn another undergraduate degree in engineering.

However, Lawrence-Whittaker’s first “hard knock” derailed this plan. It occurred during a friendly softball game in her freshman year.

“The ball took a bad bounce and knocked me out,” Lawrence-Whittaker explains. “I didn’t realize how bad it was at the time, but calculus stopped making sense. It was the ’80s and nobody really knew about concussions.”

Frustrated and confused about her diminished math skills, Lawrence-Whittaker turned to her mother who responded by reminding her that she’d always dreamed of being a lawyer. Then, she offered this wise advice: “There might be a lot of lawyers out there, but there’s always room for one great one.”

It was just the encouragement Lawrence- Whittaker needed. Soon after, she switched to the more affordable Penn State, and then fate struck again. It was during her senior year, while walking to class that she was hit by a car. Her injuries, not surprisingly, were extensive and serious, including surgery to reconstruct her left knee. She spent time during her remaining college career on crutches.

For many, a traumatic calamity such as this would have resulted in self-pity, depression or even the desire to give up. However, Lawrence-Whittaker says there was never any question of “if ” she would return, it was only a matter of “how quickly.”

She also chose to view the incident not as bad luck or a major stumbling block, but rather just a “hiccup,” for which she claims to actually be grateful.

“Despite the fact that I was a pedestrian, in a crosswalk, we lost the case,” she says. “After the trial, we spoke to some of the jurors. What it came down to was that the woman who hit me was an elderly widow. They perceived me as a young woman heading for law school, undoubtedly destined for a career that they thought would make me wealthy. Even though they agreed she was clearly in the wrong, they voted against me because they felt sorry for her, thinking I would ruin her financially.

“It was a real eye-opener for me,” Lawrence-Whittaker continues. “But, having that experience made me sensitive to how juries think. Being cognizant of those things, I think, also made me a much better trial attorney. What I found most interesting was that no one thought anything about (or objected to) the fact that they asked me about my plans to go to law school, which was completely irrelevant. Ultimately, it was one of those lessons that feels expensive at the time, but ends up being very economical to learn that early in life.”

Lawrence-Whittaker’s fortitude and strength, both physical and psychological, seem to be family traits. Growing up in Mt. Lebanon Township, a suburb of Pittsburgh, she was one of five children. Both grandfathers, with basically eighth-grade educations, worked the coal mines. Her father, an outstanding athlete, attended college on a full-ride football scholarship. His athletic prowess eventually led him to a career in professional ball.

“I’m so grateful to my father,” says Lawrence-Whittaker. “He parlayed that into five kids going to college and me, law school. My parents did the work of three generations.”

She also attributes her strong work ethic, and motivation to perform at a top level, to values taught by her parents. “We come from a longline of hardworking people,” she says, “and it was baked into us.”

Married for 20 years, she and husband, Eric, have two children – Ty, 12, and Grace, 7. Both children inherited their grandfather’s and parents’ athleticism. Ty plays travel basketball as well as travel baseball; Grace, a budding gymnast, plays fast-pitch softball and soccer with mom as her coach. Grace also sings and plays the piano.

While there are no immediate plans, this energetic and enthusiastic founder of Lawrence Whittaker PC says the firm will continue to grow to meet its ever-growing roster of clients. However, she says, she chooses to remain moderate in size in order to best meet client needs.

“My goals or vision for our practice are not necessarily based on size, but on how well we take care of our clients,” she says. “Our combined goal is to do things better than we did yesterday.

“ We are acutely aware that people are placing their trust in us when they’re dealing with their hardest stuff,” Lawrence- Whittaker adds. “You have to respect that and give them your best every day.”