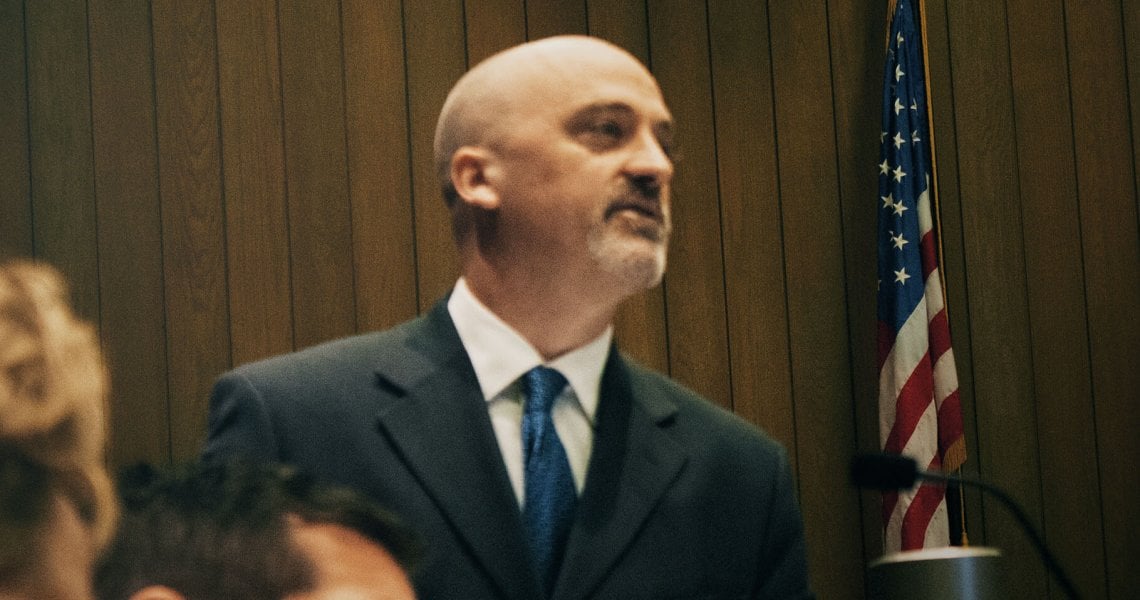 Netflix’s documentary “How to Fix a Drug Scandal” thrust Massachusetts criminal defense attorney Luke Ryan into the national spotlight in a role for which he jokingly suggests he was not overly prepared.

“It’s kind of ironic,” he says with a wry grin. “I sometimes tell people I was absent the day they taught chemistry in school, so I’m kind of an odd lawyer to have fallen into this forensic science drama. I think it pushed me in a lot of ways to grow as an attorney. What happens is when you’re entrusted with the representation of people in these really perilous situations, you’re often forced to educate yourself on things you may know little about. Becoming knowledgeable in this field was a function of trying to serve my clients.”

In this compelling four part mini-series, filmmaker Erin Lee Carr chronicles the repercussions of questionable drug lab results in the wake of chemists Sonja Farak and Annie Dookhan tainting evidence in separate but equally disturbing ways. While confessed addict Farak was using confiscated drugs as her personal stash Dookhan wasn’t even testing her drugs, just pushing all tests through as positive to impress her superiors with her speed and efficiency.

Sadly, theirs weren’t the greatest crimes in this real-life drama. State prosecutors attempted to minimize and then ultimately conceal evidence that ultimately proved to have impacted more than 30,000 criminal convictions all based on results emanating from these two labs.

Front and center, and arguably the saga’s hero, Ryan’s tenacious pursuit for justice on behalf of clients Rolando Penate and Rafael Rodriguez proved to be the match that lit this entire debacle ablaze. Both men convicted based on results emanating from these labs were represented by Ryan in a lengthy and industrious investigative process. Despite seemingly insurmountable obstacles in his pursuit for truth, Ryan is quick to point out that while challenging, his efforts might not have even been conceivable in other states.

“For all of the imperfections, Massachusetts does a better than average job in terms of providing indigent defense,” he says. “There are caseload limits and continuing legal education requirements, so defense attorneys have the bandwidth to roll up their sleeves and provide quality representation. If you think about other jurisdictions that are, as Steve Bright from the Southern Center for Human Rights refers to as ‘meet ‘em and plead ‘em’ states, our state is ahead of the curve. Generally, public defenders and people who provide representation to indigent defenders can’t possibly do the kinds of investigations that would ever lead to these kinds of results. It’s important to appreciate the role defense lawyers play in holding the government accountable.”

While pleased that the documentary brought more awareness, Ryan also makes clear that it did not adequately recognize the efforts of another key player in unearthing crucial information.

“Any time I have the chance, I sing the praise of Rebecca Jacobstein,” he says. “She appears only briefly in the documentary but played a pivotal role in the dismissals. Her advocacy persuaded the court to remand not just her case but also mine on behalf of Mr. Rodriquez, back to the trial court. Really what she did is what made what I found legally consequential. The work of an appellate attorney might not get much screen time, but I was very fortunate to work with Rebecca and consider her an unsung hero.”

A Legacy of Law

While the documentary brought new attention to Ryan’s tenacity and dedication, the Massachusetts legal community and countless underdogs within his purview have long recognized his dogged determination. Yet, some would argue that this fifth-generation Massachusetts native is not the perceived prototype of what an advocate for the underserved looks like. Indeed, at times bearing the epithets of defense attorney and activist seem to surprise even him.

“I come from a long line of attorneys and legal icons,” says Ryan. “My grandfather, who I was named after, was an attorney who became a district court judge. My office is on the third floor of a building where he has an office on the second floor. His oldest son, my father, became an attorney and then a judge in the same courthouse where his father was the presiding judge. I guess you could say it was in the very air that I breathed. I should also note that I was quite determined not to go into law. Many people had those expectations of me, but it was not something that I thought I would enjoy. So, I did not go to college with that intent.”

In fact, as he has relayed in other interviews, Ryan did not seem to be heading in any constructive direction during his undergraduate years. “I don’t think I took a sober breath my entire college years,” he readily admits.

“When I was in high school my best friend took his own life. It was one of those life-changing moments and I ended up getting through the remainder of my high school experience primarily through athletics,” he says. “But once I got to college, I was basically self-medicating. When I got to the other side of that, I realized if you tallied the number of crimes I committed during those days it was off the charts. There was underage possession of alcohol practically every day, marijuana was illegal at the time and I started smoking on a daily basis. It was somewhat shocking to me when I became liberated from those substances that I’d had no doors closed to me.

“That’s not by accident. I was considered someone who was ‘sowing his wild oats’ and that if I was just given a chance I would eventually grow up and become a contributing member of society,” he adds. “That is what happened, but it’s certainly not what happens with the people I represent who are BIPOC who don’t have that opportunity to ‘find’ themselves. We take a very different approach to the same behavior on their part where I was kind of given a free pass. They don’t have an opportunity to process trauma but are quickly pegged or labeled as addicts and/or career criminals. Really, they never have a chance.”

Ryan’s surprisingly perspicuous awareness of his own White Privilege advantage, no doubt has played a part in shaping the man and attorney he is today. In stark contrast to his college experience, Ryan received his Juris Doctor, magna cum laude, from Western New England College of Law where he served as the editor of the Law Review. He’s built a thriving practice that focuses on criminal defense at the trial and appellate level and in civil rights litigation. A cooperating attorney with the American Civil Liberties Union of Massachusetts and the Center for Constitutional Rights, Ryan has published articles on the rights of criminal defendants to access internal affairs files in self-defense cases, challenging search warrants in drug cases and abusive police interrogation practices.

Viewing his clients and their circumstances in contrast to the leniency he was afforded has made Ryan an aggressive crusader. He unabashedly acknowledges how different his life would have played out had it not been for the accident of birth in the right socio-economic environ.

“From just watching what happens to my clients I think when you fall into substance misuse you’re labeled,” he says. “It’s a medical condition that we criminalize. We don’t just criminalize, it becomes a brand on people. It prevents them from becoming anything else. Looking back for instance in my case, it’s easy to say, ‘Well, it was just marijuana,’ but if that had become my identity that I was a ‘drug offender,’ then my life certainly would have turned out differently.

“When society passes that judgement and they don’t provide opportunities to become anything else, then a lot of these individuals end up embracing that stigma and becoming what they’ve been pigeon-holed as,” Ryan continues. “My involvement never was in the direction of harder drugs, but I think that was largely a function of the fact I wasn’t pushed in that direction. I wasn’t pushed into becoming a dealer because I didn’t have the money because I wasn’t able to get a job because of a drug conviction. I can’t sit here today and say I overcame that phase of my life because I made good choices. I think I was privileged enough to not have suffered the consequences the poor and people of color are forced to endure throughout this country.”

Indeed, Ryan has very definite feelings regarding our country’s handling (or mishandling) of the drug crises.

“The War on Drugs is a failure and it’s time to reevaluate,” Ryan maintains. “I cannot fathom how we can continue to afford this from a purely economic standpoint, let alone the cost of lives. Fifty years into this and drugs are more prevalent, more potent and cheaper than they have ever been. We have wasted billions of dollars and millions of lives to end up in a worse position than we started. There are places in the world, such as Portugal that we need to be following. Just like the ‘noble experiment’ of prohibition, this is a dismal failure.”

Practicing law since 2007, Ryan has built not only an impressive portfolio of significant wins, but beyond the courtroom consistently puts his fierce convictions into action. Active in numerous organizations such as the Performance Project, Out Now, Arise for Social Justice and Springfield No One Leaves, he’s been recognized as a Massachusetts Super Lawyer in the area of criminal defense and served on the board of directors for the Massachusetts Association of Criminal Defense Lawyers. Not surprisingly, Ryan’s also been recognized with the Edward J. Dugan Award for Zealous Advocacy and Outstanding Legal Services to the Poor.

One specific area of concern for this hands-on attorney, is that there appears to be a considerable gap between actual laws and what happens on the streets between police and citizens. In an effort to help bridge this gap, Ryan conducts seminars and workshops that have drawn huge crowds at every event.

“Invariably I learn more than I teach,” he says. “Through my work I have some understanding about various laws that apply in civilian and police encounters out on the street, but those laws on the books are often not the law of the street. I think we’re living through a period when it’s painfully obvious that these incidents are survival moments. I can tell them how to protect their constitutional rights but as far as their wellbeing, the folks on the front lines have a lot more to teach than to learn.”

Seven years after he first embarked on this now historical journey through the labyrinth of faulty drug testing, the withholding of exculpatory evidence and eventual overturned convictions of more than 30,000 defendants, Ryan is still enmeshed in some remaining aspects including a civil suit he filed on behalf of wrongly convicted client Penate, but has no pending criminal cases with the attorney general’s office.

Although his path was drastically diverted by this scandalous drama, he has no regrets. With a thriving practice he still finds time to volunteer to those organizations he believes support human rights and dignity and while the Netflix docuseries sometimes created unwelcome distractions, he believes the good definitely outweighs any negatives.

“If nothing else,” says Ryan, “it started a lot of meaningful conversations. Not just about this case specifically, but many things that I care about very deeply. I think it was a quality film and I hope that it eventually leads to some systemic changes.”