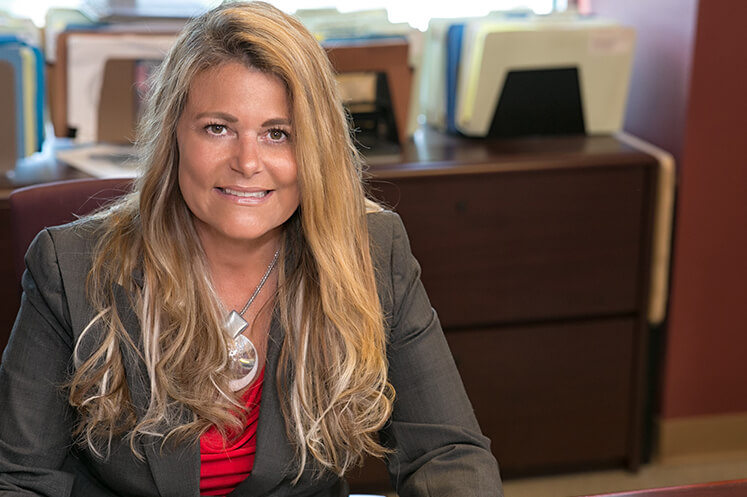 “Thinking like a lawyer is very different,” says family law attorney Marjorie G. DiLima with a playful smile. “You have to think much differently than the average bear.”

As serious as she is when it comes to her practice, DiLima has a mischievous sense of humor that fits perfectly with her zealous appetite for life. Everything she does is with great enthusiasm and complete commitment. Her education is a prime example. Not knowing exactly where she was headed career wise, DiLima had two degrees before considering graduate school: a Bachelor of Arts degree and an Associate of Arts degree in computer science.

“It seems my whole life people had been telling me, ‘you should be a lawyer,’” DiLima says. “I think my parents said it because I loved to argue. I was even telling people that was my plan when I was still very young. But, in truth, I didn’t really decide until after college.”

In 1994, in addition to graduating cum laude from Hamline School of Law, DiLima received her MBA from St. Thomas University. She managed this by taking law courses during the day and business classes at night and on weekends. The following year, she received her Masters of Law in Taxation from Georgetown University School of Law. Oh yes, in her “spare time,” DiLima managed to assume the role of editor of Hamline’s Journal of Public Law and Policy and was published in it as well. She was powering through in her typical, determined style, but as they say, timing is everything.

“I passed the bar in December of ’95,” she says, “and realized we were in the midst of a mini-recession. Nobody was hiring. I did work on a few tax cases but could not find a full-time position that I would be happy with.

“Finally, I just decided to hang out my shingle and worked out of my house for a few years,” she continues, “and was actually doing quite well for myself. I had to hire an assistant to keep pace with my growing clientele list.”

DiLima quickly built a thriving practice primarily based on word of mouth. “Most of my cases early on were minor things like DWIs and a lot of bankruptcies,” she says. “In fact, I was soon handling a considerable number of pro bono bankruptcies for the county.”

Actually, she was responsible for filing approximately half of all the pro bono bankruptcies in the county. Not surprisingly, she received the Montgomery County, Maryland Bar Foundation Award for Extraordinary Commitment to the Delivery of Legal Services in 1999, and again in 2001 and 2003.

While her practice continued to thrive, DiLima became increasingly anxious to make a move out of her home office. As it usually happens, opportunities present themselves when we least expect it. Some call it fate, but in DiLima’s case it was actually Fait–as in Dorothy Fait, a highly respected family law attorney.

“Working out of my home, I often felt like I was working in a vacuum,” says DiLima. “Dorothy was someone I had met through a mutual acquaintance and had always admired. I was working on a particular case and called to invite her to lunch. I hoped to ask her for advice on a few points.”

DiLima left that meeting with more than helpful suggestions: Fait had invited DiLima to work with her firm on an of counsel basis while she continued to run her own practice. However, it didn’t take long for everyone at the firm to be impressed with DiLima. She was invited to not just join the firm, but to come on board as a partner.

“Everything just seemed to fall into place,” she says. “Not only did they invite me on board as a partner, they asked me to be managing partner. I couldn’t be happier. I work with some of the brightest people in the profession but also the nicest.”

DiLima focuses on providing clients with the best of her considerable knowledge and expertise and has continued to build the practice as well as increase the firm’s professional relationships. In addition to handling traditional family law cases, DiLima concentrates a portion of her practice on issues arising from alcohol and drug abuse in the family as well as trusts and estates. She also continues to allot a good portion of her time and efforts to pro bono cases.

With an ingratiating personality, it’s not difficult for DiLima to turn even the most casual acquaintance into a long-term friendship. Clients and colleagues alike are quick to note her delightful sense of humor as well as her sincere compassion.

“Especially working in family law, you find yourself drawn into the lives of your clients,” she says. “Obviously, I always put forth my best efforts for every client, but those going through the highly emotional trauma of a family issue are of a particular concern to me.”

Not only does DiLima maintain a robust practice and manage the firm’s day-to-day operations, she offers her time and skills supporting the team.

“We have a great team with a special synergy,” she says, “and we are currently looking to add associates who fit in with our culture.”

DiLima is also heavily involved in both the legal community as well as the community at large. She is a member of the Montgomery County, Maryland State, and Women’s Bar Associations, and she is in her third year serving on the Family Juvenile Law Section Council for the State of Maryland for which she acts as co-chair of the mentor/ mentee committee. DiLima has served on the Executive Committee of the Montgomery County Bar Association for three separate terms and formerly served on the Bench Bar Committee for Montgomery County. In addition, she is past president and currently a bencher (lifetime position) in the American Inns of Court in the Montgomery County Chapter and sits on Peer Review Panels for the Attorney Grievance Commission of Maryland.

DiLima gives generously of her time serving as a Collaborative Divorce attorney, offering collaborative divorce as an alternative to litigation. She is a Certified Mediator for all family law issues, including custody and financial matters, and serves as a Best Interest Attorney for minor children.

“I’m a strong proponent of utilizing the mediation process whenever possible,” she says, “particularly when it comes to family law issues. Naturally, there will always be instances when mediation does not work; but given the rollercoaster of emotions surrounding family issues, it’s always a better option for a number of reasons, not the least being financial.” I ask some of my clients, “Do you want to put my child through college or yours?”

DiLima has proven to be an excellent educator as well. As an adjunct professor at Montgomery College, her students in the Family Law Paralegal Studies program are fortunate to benefit from her knowledge and experience.

“I have been very fortunate in my life to have had many wonderful teachers and mentors and this offers me an opportunity to repay some of that,” she says.

While it’s obvious DiLima’s plate is overflowing, her first priority always has been family. In fact, when asked what accomplishment she is most proud of, her response is quick and certain, “I raised an awesome young lady! Mackenzie is 16 years old and we’re closer now than ever,” she says. “I am also very proud of and very much enjoy spending time with my adult stepchildren, Rachel and Mickey, and Mickey’s wife, Annie. Pets are part of our family too, and I love running with my Italian Mastiff.” DiLima works with animal rescue associations, and she currently fosters dogs.

DiLima’s numerous contributions to both the legal community and the community at large has not gone unrecognized. She has received several honors for her work, including lifetime recognition from the Metropolitan Who’s Who Registry for her outstanding leadership and achievement in her profession. She has been named a Maryland Super Lawyer for 2010, 2015, 2016, 2017, 2018, and 2019. And in 2007, she was elected a Fellow of the Maryland Bar Foundation for her outstanding dedication to the welfare of her community, the administration of justice, and the traditions of the profession of law.

Perhaps one of the secrets to how she juggles so many important responsibilities is that DiLima keeps herself physically fit. Running is her exercise of choice, which she does both for pleasure and for charity. In 2006, DiLima accomplished a lifelong goal by running the Marine Corps Marathon while raising money for AIDS research. In 2007, she ran the Marine Corps Marathon again and raised money for the Leukemia and Lymphoma Society (Team in Training). Most recently, DiLima ran the Across the Bay 10K, and she and her staff participate annually in a 5K charity event. DiLima also enjoys riding her motorcycle with friends.

It’s been a good run so far for the youthful attorney, and she’s just warming up.