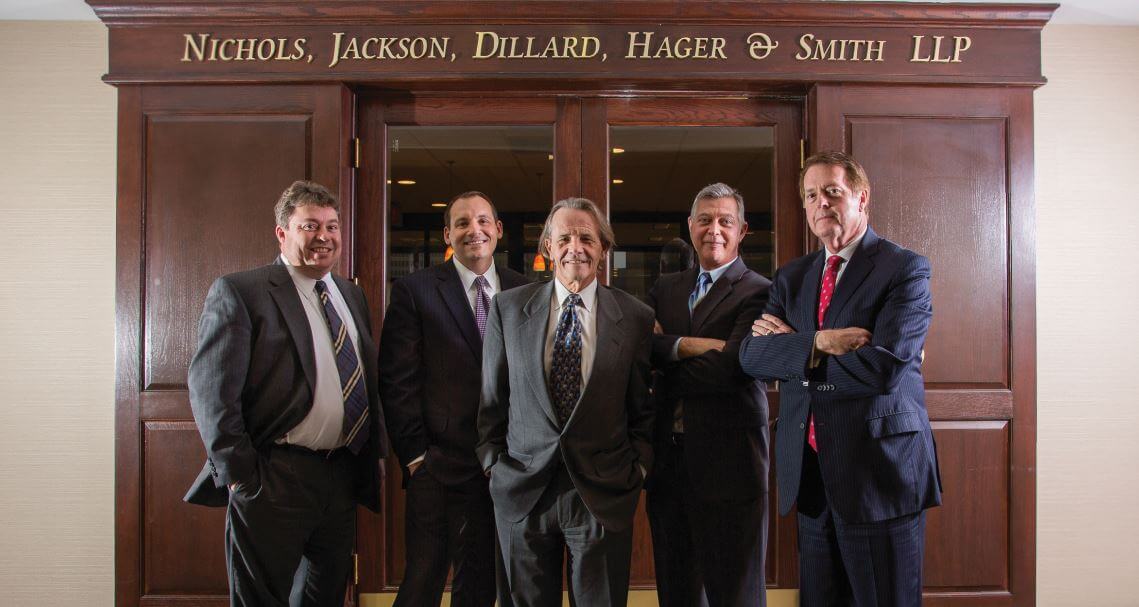 In Texas, tradition still has meaning. The tradition of excellence represented by Nichols, Jackson, Dillard, Hager & Smith, LLP dates back to 1895, making it one of the oldest law firms in Texas. Such deep and lasting roots mean that when the NJDHS team represents their clients, they do so with not only an eye toward quality representation, but quality community development.

With this legacy of service, NJDHS has carved out a niche legal practice serving as municipal lawyers representing cities in the metro Dallas area and throughout the state of Texas. While the firm’s origins are more diverse, the last 60 years have been devoted almost entirely to municipal law.

“Since 1951 the firm has been dedicated to public sector clients,” explains Peter Smith, the firm’s managing partner.

“Keeping our clients out of unnecessary litigation, that’s our daily victory,” says Joseph Gorfida, a partner at the firm whose legal career include terms as both city attorney and assistant city attorney for various municipalities as well as serving as outside counsel for various entities.

“It’s important for a firm like ours to have this narrow of a focus,” Smith says, “because so many cities have very specific rules governing them on a wide variety of subjects. It’s the most cost-effective solution for a municipality or other unit of government to have our firm on contract because we can quickly address any municipal situation.”

The private practice of municipal law requires a bit more than a standard legal practice. It requires a certain dedication to the community beyond simply drawing a paycheck.

“This is not an area of the law one enters to get rich,” Smith jokes. “We don’t make as much money as the people on the other side of the table, but I can sleep at night knowing that we do good for the communities we represent and live in.”

“All the lawyers here enjoy what they do,” adds Gorfida. “We view it as a service as well as a career.”

While municipal law is not the most well-known area of law, Gorfida knew early on that he wanted to pursue it as his career. Shortly after graduating law school from the University of Tulsa, Gorfida took a job in the city attorney’s office for the city of Plano, Texas. He served as an assistant city attorney for Plano, Texas for several years before interviewing for and accepting a job with NJDHS.

Smith always wanted to be a lawyer, but began his career with the judge advocate general corps. After earning his law degree from Texas Tech Law School, Smith served four years in the Army JAG corps attaining the rank of captain. Though his ROTC commitment was only four years, Smith remained in the service part time with the Texas Army National Guard, eventually rising to the rank of lieutenant colonel.

“My dad was a career soldier, so I always knew I wanted a career in the public sector,” Smith explains.

Already experienced with public sector law from the military standpoint, NJDHS hired Smith as an associate. Beyond just representing cities, Smith found himself focusing on issues relating to economic development.

Each of the 12 attorneys at NJDHS is drawn to a different area within municipal law practice. While Smith’s focus is on economic development, Gorfida’s work tends to skew more toward procurement, land use and employment law.

“Employment law is always a hot topic and we get asked to do a lot of seminars on those areas,” explains Gorfida.

In many respects, cities face the same sort of legal needs that individuals or corporations do: tort defense, contracts, employment law. Municipalities, however, face increased regulation over their private sector counterparts and though NJDHS does not do lobbying work, they are occasionally called to help cities understand state and federal mandates and help the state understand the needs of the city.

“The biggest legal problem cities face today is compliance with unfunded state and federal mandates,” Smith explains. “Add to that, the issue of caps on appraised values and ad valorem taxes, which can place cities in a difficult spot. To provide the services that people expect and the state requires, there has to be revenue, sometimes these unfunded mandates lose sight of that fact.”

The firm has also been called in to help cities and city officials understand the specific demands of the Texas Open Meetings Act.

“That’s always difficult because the act restrains what elected officials can talk about and when,” Smith explains. “We have to help officials understand the balance between the act’s requirements and the First Amendment rights of elected officials.”

Weaving through the menagerie of legislation, mandates and other municipality-specific laws requires a great deal of training and critical thought. That’s why the attorneys at NJDHS find it so appealing.

“That’s rewarding,” Gorfida says, “knowing you’ve solved a problem and actually knowing that what you’ve done has helped a community.”

Most recently, NJDHS can point to two large-scale community economic development projects in which the firm played a critical role. The massive new multi-tower State Farm regional headquarters in Richardson, Texas covers a 186-acre site and will bring over 6,000 new jobs to the area once complete.

The construction of the Denton County Transportation Authority A-train, which opened in June 2011, involved a very complex legal arrangement including buying light rail cars from an international company. NJDHS helped the Denton County Transportation Authority shepherd the 21-mile long commuter rail toward completion. The A-train now serves over 2,000 people a day commuting from Denton to Dallas

The construction of such major projects may make NJDHS an inescapable part of both Texas history and the Texas landscape, but it was the events of 1963 that placed the firm squarely in American history. When President Kennedy was assassinated in Dallas, H. Louis Nichols, a partner at the firm, happened to be serving as president of the Dallas Bar. In his capacity as bar president, Nichols interviewed Lee Harvey Oswald in the Dallas jail, and even appears in the Warren Commission.

Since the days when Dallas was a simple one-horse town, to today’s sprawling metropolis, Nichols, Jackson, Dillard, Hager & Smith, LLP, continues to leave its own mark on the landscape both in the legal advice given to cities and in the new developments that they help make possible. The community-minded leadership and problem solving of the attorneys at NJDHS continues and will carry that legacy forward for the next century of service. Amile Wilson

Amile Wilson is a former contributor to Attorney at Law Magazine. He is a writer and photographer. He has contributed to the magazine as both.