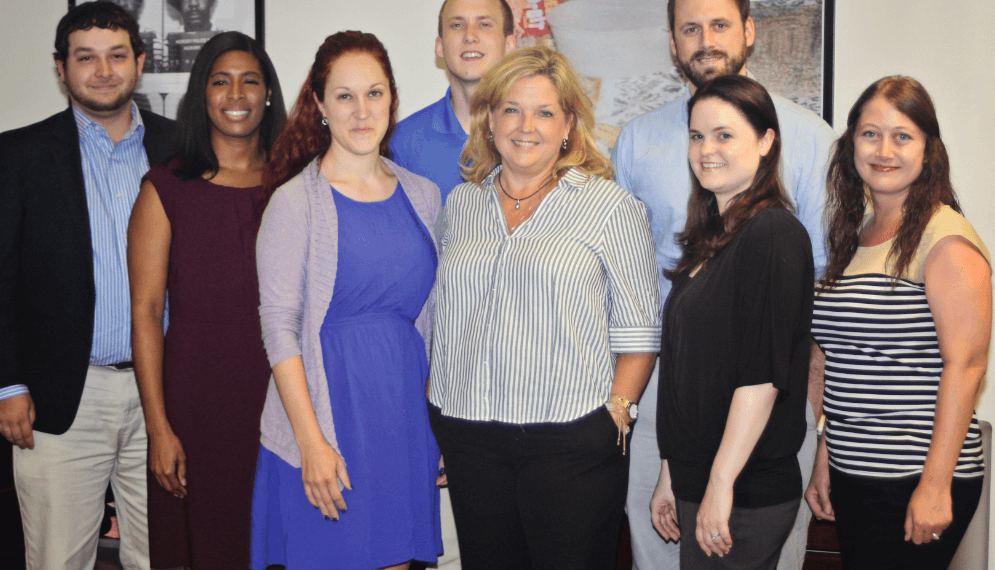 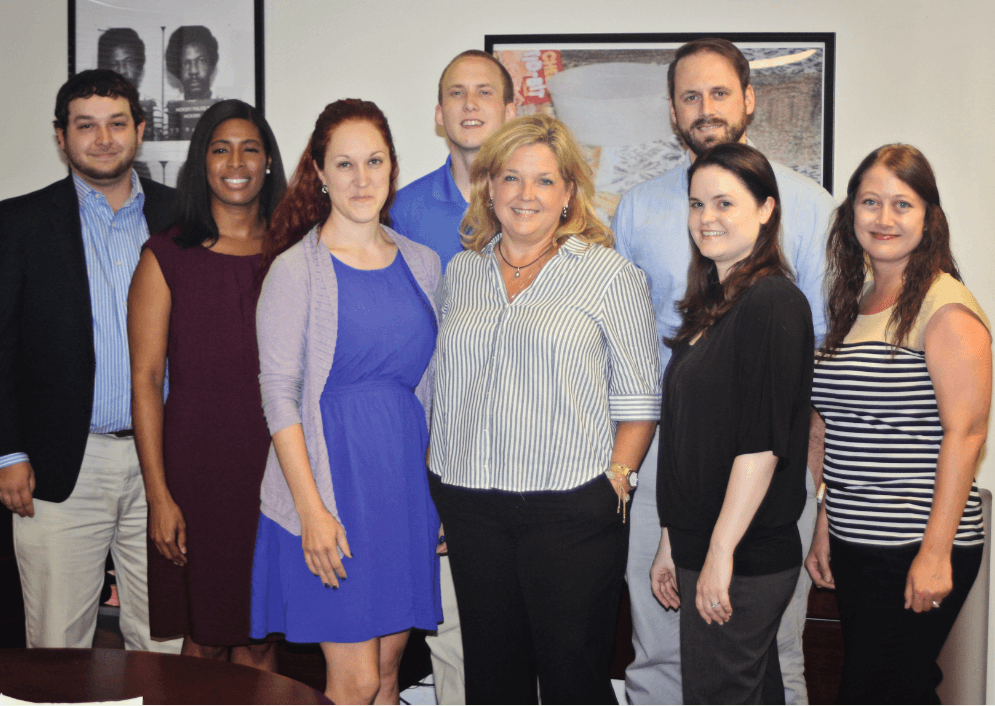 In the Durham office of the North Carolina Center on Actual Innocence (NCCAI), Executive Director Christine “Chris” Mumma hangs a 1987 crime scene photo of fruit taken in the kitchen of a Hickory, North Carolina woman who had been raped. Willie Grimes was convicted of the crime and sent to prison for life.

Latent fingerprints taken from the fruit touched by the rapist were missing for years. When found, they led to the real perpetrator and Grimes was freed… after 25 years in prison.

Grimes had always maintained his innocence and asked NCCAI for help. The Center gets 600 such applications a year; 98 percent are quickly rejected and it only litigates one or two cases a year.

The bulk of the wrongful conviction cases it investigates are the result of misidentification, false confessions, coached informant testimony, and tunnel vision during investigations. Since its founding in 2000, the nonprofit has exonerated eight people and contributed to the exoneration of twenty others. Operating out of cramped offices, Mumma oversees a staff of five attorneys and a handful of part-time law students.

Chris Mumma is strong-willed, charismatic and fully invested. “We put our hearts and souls into cases because we believe in them,” she said.

“We’re not looking at cases from the beginning saying, ‘these people are innocent’,” said Mumma. “The starting position is that the system got it right.”

She introduced me to Grimes at a July exoneration hearing for Robert “Bobby” Bragg in Boone, N.C. Grimes, quiet, reserved and well-dressed, told me he goes to all the hearings as a show of support for Mumma and her staff who were responsible for his exoneration.

“I am 100% convinced that Bobby Bragg is innocent. We’ll keep fighting for him until he comes home,” said Mumma.

WHEN THE SYSTEM FAILS

After serving on a jury for a murder trial that resulted in the death penalty, Mumma left corporate finance for UNC School of Law. During her clerkship for SCNC Chief Justice I. Beverly Lake Jr., Mumma saw cases she thought had questionable outcomes. Discussing them with her former criminal law professor, Rich Rosen got her interested in wrongful convictions. When Lake established the Actual Innocence Commission to study the causes of wrongful convictions he asked Mumma to be its executive director.

“Our justice system is underfunded and overloaded. Defense attorneys don’t have access to the resources they need. Prosecutors’ workloads are so heavy that they are trying to plead cases out.”

In 1989, Dwayne Dail refused a plea for a minor offense, instead choosing to go to trial where he was convicted of raping a 12-yearold girl and sentenced to two life sentences. The prosecution’s case relied on a false identification and testimony that hairs found at the crime scene were “microscopically consistent” with Dail’s.

“I believe the prosecution knew I was not guilty. They had to go forward because the victim identified me,” said Dail.

Mumma took his case and, after years of investigation, was eventually given access to crucial evidence reported for years by police as having been destroyed. DNA testing of the evidence confirmed Dail’s innocence.

“I had complete faith that innocent people don’t go to prison and I was wrong, very wrong, and it cost me almost 19 years,” Dail told me during a cook-out at his home in August to celebrate the 10th anniversary of his exoneration.

THE SYSTEM IS FOR THE GUILTY

In 1991, Greg Taylor’s SUV got stuck in mud near where a young woman was murdered. He was convicted and sentenced to life in prison based on coached eyewitness testimony, a “false-alert” on his SUV by a bloodhound, jailhouse informant testimony, and a spot on the SUV believed to be the victim’s blood. Testing by an SBI analyst determined the spot was not blood, but the final report did not disclose the full testing results and the agent’s notes were not given to Taylor’s original defense attorney. NCCAI found the notes, leading to Taylor’s exoneration.

He had spent 17 years in jail.

Sitting around the picnic table at the cook-out with Taylor, Dail, Dail’s family and friends and Mumma and her staff, the mood was awkward. In many ways, these two men are just like the rest of us – they are not criminals. But events have left them with a very different world view.

“Stop and think about what happened in your life between the ages of 20 and 40 or 30 and 50 and then think about all of that being lost; raising your family, building a career. That’s what happens to people like Greg and Dwayne. They lost everything they had and could have had,” explained Mumma.

“The solution really lies on the front end in trying to prevent people from being wrongfully convicted,” said Mumma.

Unfortunately, she says, law enforcement and the judicial system have been resistant to change.

Mumma helped establish the North Carolina Innocence Inquiry Commission in 2006 when her requests for files and evidence were stone-walled by local law enforcement and district attorneys. The neutral state agency investigates post-conviction claims of innocence and can use its statutory authority to obtain files and search for evidence.

Misidentification of a possible perpetrator is the leading cause of wrongful convictions. The Center led the way in reforming how line-ups are conducted in North Carolina. Interrogations of suspects for cases involving violent felonies and all juvenile cases are now recorded because of reforms pressed by the Center.

“We can help to put all kinds of forensic and procedural improvements in the system, but as long as there are humans involved in the justice system, there’s the potential for problems,” said Mumma.

In 2015, the NC State Bar brought misconduct charges against Mumma that could have resulted in the loss of her license.

The charges were related to her investigation of Joseph Sledge’s claim of innocence. Sledge was ultimately exonerated after 37 years in prison for a double murder he did not commit.

After seven charges were dismissed, Mumma received a written admonishment – the lightest form of discipline – for the one remaining charge.

“I have always thought prosecutors don’t like what we do. That case provided the solid proof,” said Mumma.

The NC State Bar commented for this story, “As required by law, the State Bar investigates each grievance that it receives from members of the public, lawyers, and the judiciary and prosecutes only grievances where there is probable cause to believe that a violation of the Rules of Professional Conduct occurred. No individual lawyer, or group of lawyers, is targeted for investigation or prosecution by the State Bar.”

“That hearing was a horrible two years of my life. People have called me a lightning rod. If I am, then I’m a lightning rod for change, not for destruction. I am driven by the truth.”

‘THE CENTER NEEDS TO SURVIVE’

The State Bar proceedings left the Center behind on cases and strapped for cash. Mumma has never received a paycheck from the Center.

Investigation and litigating postconviction innocence claims can cost up to $70,000 per case. Mumma worries the Center will run out of money before the Bragg case reaches a conclusion.

Forty percent of the NCCAI budget comes from exonerees who voluntarily contribute portions of their wrongful conviction settlements. It also receives donations and grant funding from the U.S. Department of Justice and various family foundations and legal organizations, including Z Smith Reynolds, Park Foundation, and NC Bar Association Foundation.

Mumma is actively looking for donations from endowments, corporations and family foundations. “I’m not very good at raising money. I don’t like asking for it, but I’m having to learn how to do it.”

“If we run out of money, then the North Carolina justice system loses the benefit we add, which we believe is huge. It includes exonerating the innocent, training our future prosecutors and defense attorneys, criminal justice reforms which lead to increased reliability of convictions, and increased public confidence in the justice system.

“Wrongful convictions can happen to anyone,” added Mumma. “There are innocent people in prison today. Some of them will die there. “

I asked Dail what would happen if the Center closes. He sat up, arched his back, fixed me with piercing eyes and said, “The Center needs to survive. There will always be human error, even with scientists. It’s extremely important that we continue, not only for the innocent people but to stop guilty people from committing additional crimes.”